The FBI found nothing in their investigation. But Peter Strzok had a mission to accomplish and wasn't going to let facts get in the way.

A string of bombshells surrounding the Michael Flynn investigation and prosecution have hit the news this week and last as exculpatory evidence continues to be released. The latest batch shows that former FBI agent Peter Strzok halted an order to end “Crossfire Razor,” the code name the FBI gave to Flynn and his investigation. This came 20 minutes after a formal order to shut the investigation down.

JUST IN: New FLYNN documents show the FBI had drafted a document to formally close the case against him on 1/4.

But 20 minutes after it circulated, STRZOK and other agents put the brakes on it. pic.twitter.com/sLhMBTzGEr

All of this went down 20 days before the soon-to-be National Security Advisor was interviewed by the FBI. They had information from their Russian election interference investigation that Flynn had contact with Russians, but they were unable to find “derogatory info” that linked him to the Russians’ efforts. On January 4, 2017, the case was officially closed through a memo that went out to all DoJ personnel involved. 20 minutes after the memo was sent, Strzok texted one or more persons whose identities have been redacted to reverse the decision to close the investigation. He shared news of the investigation’s continuation with his lover, Lisa Page. 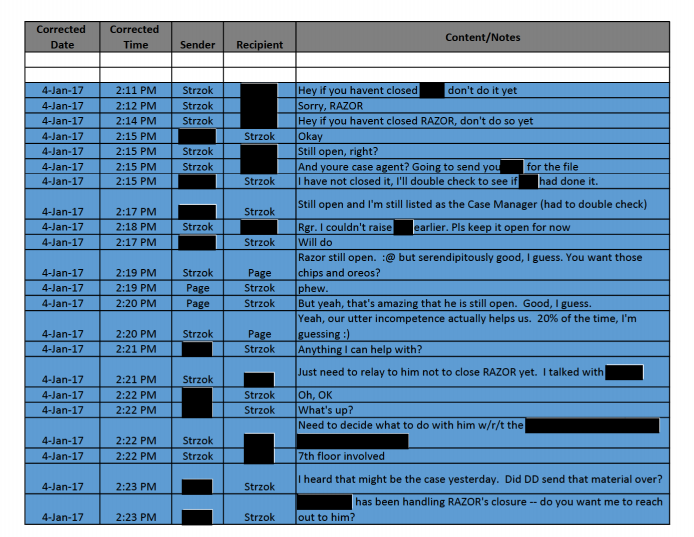 “The goal of the investigation was to determine whether [Flynn], associated with the Trump campaign, was directed and controlled by and/or coordinated activities with the Russian Federation in a manner which is a threat to the national security and/or possibly a violation of the Foreign Agents Registration Act,” the FBI memo stated. “Following the initiation of captioned case, the [Crossfire Hurricane] team conducted a check of logical databases for any derogatory information on [Flynn].”

This is further proof that the FBI knew Flynn had done nothing wrong, but pushed forward with their attempts to entrap him. It was revealed yesterday that Flynn’s interview was intended to catch him in a lie so they could pressure him to either flip on President Trump or be charged with lying. He chose the latter.

As CBS News Senior Investigative Correspondent Catherine Herridge reported today, the released FBI memo indicates multiple attempts to find conspiracy or unwitting cooperation with Russian sources. They investigated Flynn from multiple directions and were able to find contacts, but nothing from those contacts indicated he participated with their election interference campaign. This is important because the fact that he had contact with Russians was used to entrap him during his FBI interview three weeks later.

The memo indicates the investigation was officially closed, but Strzok’s intervention prevented it from being processed. This in and of itself may be enough evidence to throw out his FBI interview as it would mean the predicate for having the interview in the first place was bogus.

Human Events EIC Will Chamberlain broke down the timeline revealed in the memo and the released text messages to and from Strzok.

February 10: Strzok texts Page about a document that he was trying "to not completely re-write so as to save [XXX's] voice."

The investigation of Michael Flynn was tainted from the start by politically motivated hacks. The FBI’s own internal documents show the case was closed before they even interview Flynn, but Peter Strzok had a mission, facts be damned.