If we get the Dominion-SolarWinds MOAB, even John Roberts can’t cover it up

As many Trump supporters lose hope because it seems everyone from mainstream media to the Supreme Court to most Republicans on Capitol Hill are against us, we can look to the potential for a Dominion Voting Systems "MOAB," possibly through SolarWinds Orion. 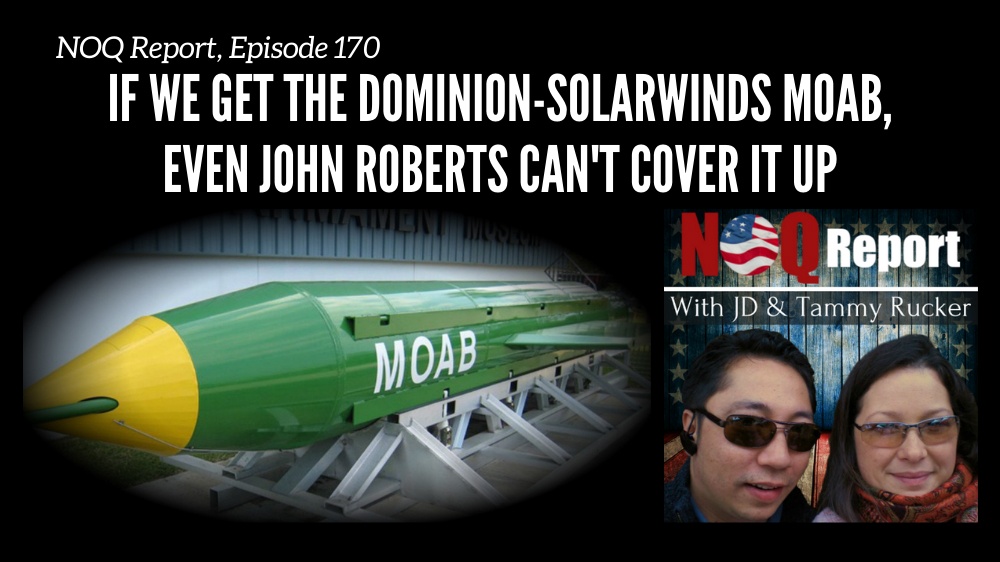 Supreme Court Chief Justice John Roberts appears to be against us. By “us,” I mean the majority of American people who support President Trump and believe that the 2020 election was fraudulently manipulated to change the righteous results. But there’s hope that goes beyond the power the Chief Justice has. It’s more powerful than mainstream media, Big Tech, the Democratic Party, and cowardly Republicans on Capitol Hill.

Technically, there are two things that are more powerful. The first is the “MOAB” – the Mother Of All Bombshells, which we believe may be coming very soon. It’s an advancement of the so-called “Kraken” made famous by attorney Sidney Powell and involves a deep dive into the data hidden on Dominion Voting Systems servers. But they probably scrubbed them completely, right? Yes, this is likely. What’s also likely is that SolarWinds Orion has on their servers the original data, and those servers may be in the hands of the Texas Rangers, FBI, and US Marshals.

We’ve tried going through the standard processes of presenting sufficient evidence to demonstrate widespread voter fraud, yet it hasn’t really moved the needle. Sure, more Americans are aware today that massive voter fraud took place, but without actions from state legislators, electors, Capitol Hill, or the Supreme Court, all of that evidence is worthless.

The data that hopefully is in the right hands right now is the MOAB we seek. At least it might be. It could be something completely different. We won’t know until it happens, which brings me to the other force more powerful than those arrayed against us. The reason I believe the MOAB is coming is because I know that God’s will is supreme. If He wills it, nothing the left can do will stop it from happening. That’s not to say His will is for President Trump to win, but far be it for us to lose faith in the potential.

We have until January 6th to easily correct the election and we have until January 20th to do it the hard way. I talked in more detail about this in an article I published yesterday. Here is it in full so you don’t have to click over. When you’re done, please be sure to listen to the latest episode of NOQ Report:

There is no shortage of evidence proving massive voter fraud, particularly in swing states. Some may question that it was enough to sway the election results, but only if they’re willing to pretend most of the evidence is false and only the incontrovertible is to be allowed. But at this stage, it appears we need a “MOAB,” the Mother Of All Bombshells, in order to sway any of the entities who have the power to set things right.

Who are these entities? There are several. State legislatures are not out of the equation simply because they’ve sent their electors. In most states, they can pass legislation instructing Congress to not count the Biden electors without a problem. Even in the states with their own rules prohibiting such things, Article 2, Section 1.2 of the U.S. Constitution supersedes those rules.

Congress can act. The Supreme Court can act. The electors themselves can act. But to compel any of these individuals or bodies to act would require the aforementioned MOAB. We need hard evidence that demonstrates unambiguous, undeniable voter fraud on a scale that could easily flip the election. That evidence will almost certainly come from Dominion Voting Systems, and the most likely place where that evidence can be found is through SolarWinds Orion.

I covered this a couple of episodes ago on NOQ Report, but it’s worth explaining more fully with timing and consequences for context. The raid last week of SolarWinds Orion’s Austin headquarters has been conspicuous for two reasons. First, it was interagency and including the FBI, US Marshals, and Texas Rangers. If it had only been the FBI, I wouldn’t have much hope and would assume the evidence had already been destroyed. The second thing that makes this conspicuous is that Dominion Voting Systems has gone to great lengths to distance themselves from SolarWinds, going so far as to scrub their website of mentions and proclaim their disconnection in lie-filled testimony.

SolarWinds handles secure file transfers. It’s very likely that on their servers is the original information that came from vote machines across the nation. If this is the case and trustworthy law enforcement agencies have this data, it could represent the MOAB we seek.

There has been a lot of confusion about timing. Mainstream media, Big Tech, Democrats, and even most Republican lawmakers have essentially declared it’s over. But it’s not. The Constitution is still the foundation of the law of the land and January 20th is the only date we truly need to concern ourselves with regarding the election. January 6th is important as well since that’s when the electors will be counted by Congress. At that point, if the MOAB hasn’t dropped, Joe Biden will officially become the President-Elect. That wouldn’t be the end, but it would give us two weeks in which to make a case strong enough to change the results.

Since a majority seem to be unwilling to accept the clear evidence that has already surfaced, we need a bombshell that even fools cannot deny. That bombshell is likely going to be Dominion Voting Systems data captured by SolarWinds Orion.