Move over, CHOP. The CLAT is up and may be here to stay. 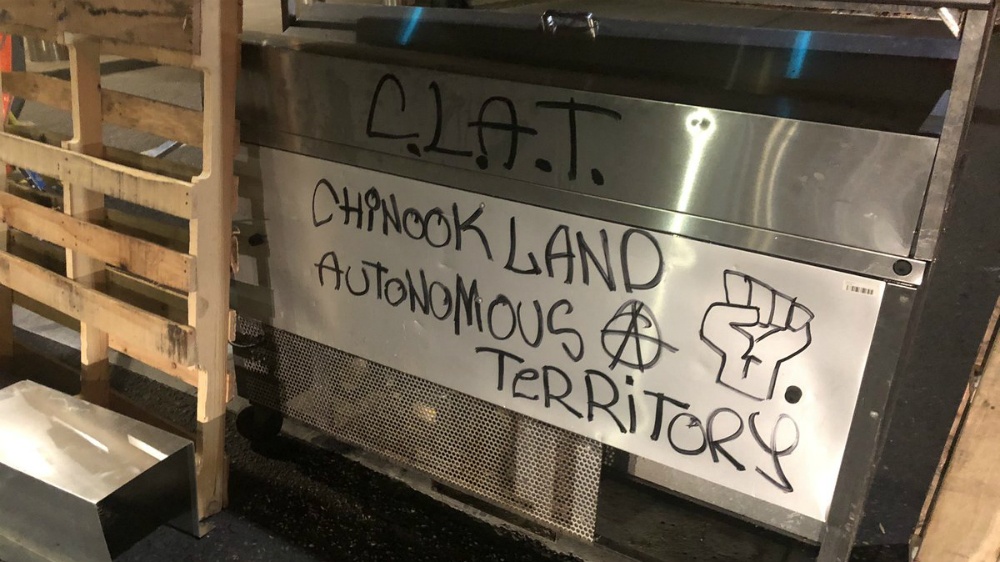 Awful memories of murders and lawlessness are still on the minds of many in Seattle following the debacle of the Capitol Hill Autonomous Zone (CHAZ) which eventually came to be known as the Capitol Hill Occupied Protest (CHOP). Now that The CHOP has been dismantled, a new autonomous zone has popped up in Portland, Oregon. This one is called the Chinook Land Autonomous Territory (CLAT). Yes, I’m serious.

There are no indications coming from media or government sources as to whether it will be allowed to stay up, but overnight chatter was strong on Twitter. Barricades have been erected. At least on its first night of existence, law enforcement pushback was limited or non-existent. As far as those talking about it on Twitter are concerned, it’s here to stay.

Protestors are trying to setup their own barricades to create their PDX version of CHOP. Many have tents setup across from the Justice Center. This is after the Portland Mayor told the Feds to leave the city ASAP.

#CLAT, the Chinook Land Autonomous Territory, is a reminder that this is stolen Native land and federal agents and PPB have no claim to it

Please support folks on the ground however you can! And remember to mask up and keep distance if you head downtown!#PortlandProtests https://t.co/5dWGDPfkWB

A cart of barricade supplies is going through the #CLAT, get down with all your best barricade materials, zip ties, and paint to make em pretty!!
Get down as soon as ya can, people especially at arojnd 5am!#ACAB #BLM

A quiet night so far on Chapman Square. Live music is being played. More and more tents are appearing on Lonsdale Square for the occupy movement. #CLAT #PortlandProtest #PDXprotest #BLM pic.twitter.com/uv3RymQtqJ

"A shield's worth of weed shake" is my favorite thing I've ever seen someone fuel a fire with.

A cart of barricade supplies is going through the #CLAT, get down with all your best barricade materials, zip ties, and paint to make em pretty!!
Get down as soon as ya can, people especially at arojnd 5am!#ACAB #BLM

The autonomous space at Lownsdale sq has also been dubbed the Chinook Land Autonomous Territory or #CLAT, which I enjoy a lot because we’re on stolen fucking land. So come on down to the CLAT and build some barricades and eat ribs! And stay all night! #ACAB #BLM pic.twitter.com/LurV97pDxV

Here is what has been reconstructed of the barricade so far. It turns out the person that started the fire was with the group people complaining about fires. #blacklivesmatter #pdx #portlandoregon #oregon #blm #acab #portland #justicecenter #riotribs #CLAT pic.twitter.com/laXq88cOVD

Pigs tired to push barricades once a couple hours ago, comrades got them back and are up stronger than ever, more people are still needed for early day shifts, get down if you can. #ACAB #CLAT #BLM #PDXprotests

Barricade at the Chinook Land Autonomous Territory (#CLAT).
People are needed here ALL night long, especially in the early morning! Get on over rn! Bring some tents. pic.twitter.com/cP5cG77m9m

An autonomous zone was launched in Portland briefly following the launch of the CHAZ, but it was quickly removed. This time may be different. Mayor Ted Wheeler and Governor Kate Brown are even less supportive of law and order than their counterparts in Seattle. Moreover, this sixth week of protests, riots, and anarchy surrounding the Justice Center in Portland has Democratic leadership hampering law enforcement even more than usual.

Earlier this week, federal law enforcement agents injured a rioter with a rubber bullet to the face. Since then, Wheeler and Brown have called on the DoJ to back off. Meanwhile, local Portland law enforcement has been forced to use kids’ gloves against the rioters in an effort to deescalate. There has been no deescalation for over six weeks, but Democrats ill do what Democrats do.

In this episode of Conservative News Briefs, JD breaks down the situation while trying to keep a straight face. It sounds like parody, but unfortunately it isn’t. If The CLAT endures as long or longer than The CHOP, it could end up being even more devastating. The occupied area is a high-traffic zone just west of the Willamette River. Several federal buildings are nearby. Antifa black bloc and Black Lives Matter rioters have targeted federal properties in an attempt to antagonize national law enforcement. In other words, this could get very ugly if it’s allowed to persist.

Will Portland allow this new autonomous zone, The CLAT, grow to what The CHOP was in Seattle? That seems likely considering weak leadership at the state and city levels. Democrats want this to be the status quo across the country.