Talk of President Trump starting a new political party has driven buzz across social media in the days following Joe Biden's inauguration. Serious efforts to form new parties have been underway since the election. It all hinges on whether or not Trump throws his name and power behind it. 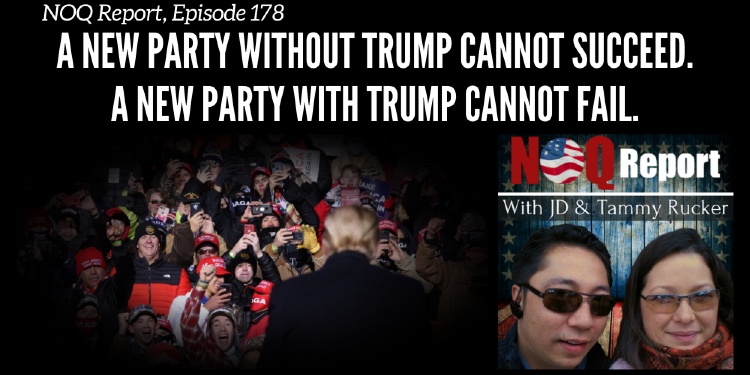 There is a lot of talk nowadays about conservatives and Trump-supporters forming a new political party. Angst towards the Republican Party is at an all-time high as the GOP Establishment attempts to distance itself from President Trump while retaining his base. This isn’t going to work. They overplayed their hand and had delusions of grandeur regarding their own popularity.

Many are calling it the “Patriot Party.” I like that. I love the idea of breaking away. I support it fully. But I also have a word of caution. There’s no reason to get too excited about it without President Trump leading it. If he does, it will succeed. It will become a new favorite launching point for other candidates. Many Republicans will join. I would expect some lawmakers to make the switch as well.

Without Trump, it still needs to happen, if only for the future. I talked about a lot of this in the latest episode of NOQ Report, but one thing I didn’t mention was the fact that even with Trump in the White House, the GOP has been leaning towards the middle. This has been a gradual shift since President Reagan was in the Oval Office.

It’s happening for two reasons. First, that’s where the Republican Establishment wants to be. They love the murky middle. Second, the Democrats are lurching so far and so fast to the left that many Republicans think it’s practical to hover in the middle as a common sense alternative to Independents. That strategy has and always will fail.

There will be plenty of passion to drive a new party if Trump chooses to lead it. He could do that, or he could take on Fox News and fill the void for conservatives to have a proper news channel. I love One America News and I like Newsmax, but they don’t have the gravity that a TrumpTV Network would have. Ideally, he would do both. That would be epic.

In today’s episode, I also gave a quick update on writ of quo warranto. I had a nice conversation with Leo Donofrio about it yesterday and I’m preparing questions for him so we can help get the information in front of the right people. Lord willing, we will be successful.

A new party should definitely move forward as the GOP continues in its feckless, milquetoast ways. But its immediate success is contingent on President Trump taking the helm. Otherwise, it’s a long-term play at best.