Writ of quo warranto: How the election can be corrected AFTER inauguration

It's Inauguration Day, which means the last batch of hopeful Trump-supporters grasping at straws are likely going to give up. But there's another pathway to correct the results of the election that only came available AFTER Joe Biden was officially inaugurated. Let's talk about a writ of quo warranto. 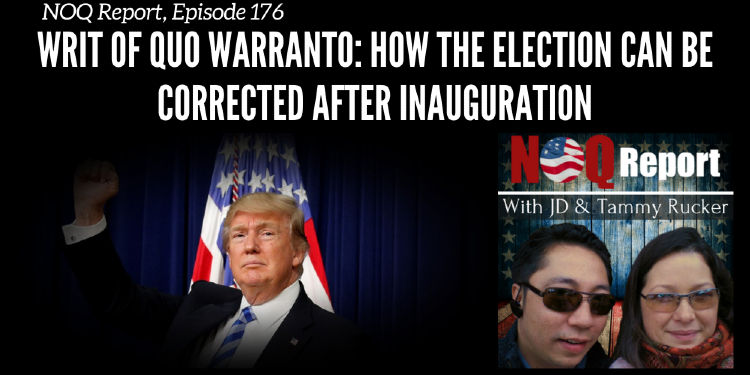 It’s Inauguration Day, which means unless a miracle drops on us immediately, Joe Biden is the 46th President of the United States. Once he’s inaugurated, it’s essentially over for any hopes that President Trump can continue into a second term, right? Hold your horses. There’s another avenue to expose voter fraud that only became available AFTER Biden’s inauguration.

This play is called a writ of quo warranto. Before I talk about that, let’s make something perfectly clear. For the past several weeks I’ve talked about the “MOAB”—the Mother Of All Bombshells—as being the way for a miracle to manifest and finally force mainstream media, Big Tech, Democrats, Establishment Republicans, and the judiciary to pay full attention to the voter fraud that stole the election on behalf of Joe Biden. In retrospect, I was too limiting in how I described God’s sovereignty. If He wills that President Trump is to win, who am I to declare how I believe it will come about?

A writ of quo warranto isn’t necessarily a MOAB because it doesn’t require a new piece of bombshell evidence. It takes the accumulated bombshells, affidavits, videos, and other pieces of evidence and consolidates them into one legal case. There are a few things that make this play completely different from what Rudy Giuliani, Sidney Powell, and others have attempted through our corrupt judiciary. With a writ of quo warranto, the clock starts AFTER inauguration because it challenges a sitting government official’s authority to be in office based on actions, such as voter fraud, that aided in that situation.

Leo Donofrio, who I admittedly know very little about, has been talking about this maneuver for a month. On his site, he has been calling on President Trump and his team to prepare to file this writ. He has also laid out the groundwork on which they can challenge the election and “show the receipts,” as he declared on his latest post:

THE MAGA COUNTERPUNCH IS QUO WARRANTO IN DC DISTRICT COURT: Show The Receipts Of Election Fraud

See my previous reports for case law and analysis of the federal quo warranto statute. The bottom line is that SCOTUS has held that an election of any United States official can be challenged based on fraud or error by a writ of quo warranto. And the 9th Circuit Court of Appeals recently held that the proper venue to challenge the election of a sitting President is the D.C. District Court. We have a statute. We have a venue. Bring the receipts, President Trump.

If you don’t bring the receipts by quo warranto, then you will have quit. It’s all in or all out. There’s no other options left. This must be done. You have to give the proper law in the proper venue a chance. If you quit now, it will be broadcast as an admission that there was no fraud, error, or lawlessness by election officials.

As soon as Biden is sworn in, you can file the complaint. The gaslighting of America will only end by counter-punching with a verified complaint showing all of the evidence. Then comes a jury trial.

Furthermore, because of the widespread persecution of politicians who supported an investigation of the election, such as Georgia State Senators Brandon Beach and Burt Jones, alternative standing as interested persons under the quo warranto statute has been created for them to bring quo warranto actions too.

Beach and Jones were both stripped of their committee chairs. Therefore, they now have standing to petition the D.C. District Court to try the case before a jury, because that is the only way they can now prove their innocence and justification.

Simply put, the anti-MAGA conspirators have overplayed their hand in persecuting stop the steal politicians and patriotic citizens. In doing so, they caused very real injuries that need adjudication. These parties now have an interest in quo warranto which is unique and particular to them as opposed to the general public at large. Such particular injuries create unique standing.

Nobody right now is talking about quo warranto other than at this blog. That will change soon. We are a nation of laws. And we have an established means of testing elections. Those means, laws, cases, etc. have existed from the very start of our nation.

On the latest episode of NOQ Report, I broke down my takeaways from Donofrio’s assertions, explored what this could mean if it’s initiated by President Trump or others, and engaged in speculation of how this could all be the proper play we’ve been seeking all along. We’ve watched in utter frustration as mainstream media ignored evidence of voter fraud while Big Tech suppressed it. We’ve seen the expected attacks from Democrats and the semi-shocking betrayals from the Republican Establishment.

Over the last few weeks, I’ve held back on talking about the majority of theories, strategies, and observations that have come my way. It’s not because I ignored them, but most simply didn’t pass the “smell test” of credibility and likelihood. What Donofrio is proposing does pass this smell test. That’s not to say I consider it likely, and I hate to be perceived as a peddler of false hope, but the potential here is actually higher than any of the lawsuits I discussed prior. Those seemed doomed to fail. A writ of quo warranto is as close to ironclad as we’ve seen presented.

It’s conspicuous that practically nobody has talked about this play. A writ of quo warranto appears to have all of the legs necessary for President Trump and his supporters to be vindicated. Will his team act on this? Are they quietly acting on it already?

Kudos to “Linda” for bringing this to my attention.

Biden sworn in as 46th President of the United States