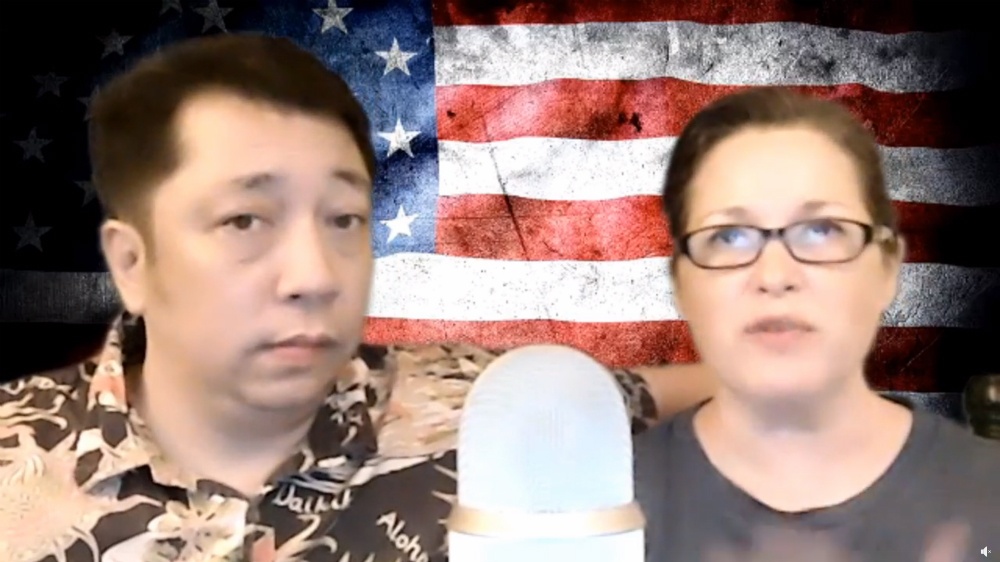 On today’s episode of NOQ Report big show, Labor Day weekend seems to be starting off with a bang, at least for those supporting the #WalkAway movement. Brandon Straka’s team and supporters were chased off the streets in Dallas by an angry mob of Black Lives Matter supporters unhappy with their presence. They threw bottles, stole personal property, and verbally attacked the actual peaceful protesters who support President Trump.

Food Lion reversed it’s anti-American stance on employees wearing face masks with the United States flag on them after initially telling Gary Dean, a 69-year-old U.S. Air Force veteran, there were complaints that his mask was offensive. Yes, we live in a society in which the American Flag is somehow considered offensive by so-called Americans.

“As a veteran, my dad being a World War II hero, my best friend killed in Vietnam, out of respect for them, I can’t just say, ‘No, I’ll take my flag and put it in my pocket,” Dean said.

In Detroit, law enforcement are having their hands tied against violent rioters. According to Breitbart:

A federal judge in Detroit has ordered the city’s police not to use batons, tear gas, shields, chokeholds, rubber bullets, sound cannons, or any other type of non-lethal force against protesters for the next two weeks.

The late Friday ruling granted a temporary restraining order to the activist group Detroit Will Breathe, which sued the city on Monday, claiming that excessive police force infringed upon their protesters’ First Amendment rights, the Detroit Free Press reported.

U.S. District Court Judge Laurie Michelson’s order stops police from using any type of force during protests without “probable cause.”

“For a short period, we know that the police will not be able to use the brutal tactics they have in the past against peaceful protesters without violating a court order,” said Jack Schulz, who filed the order on behalf of the group.

But Detroit Police Chief James Craig said the police have not used force against peaceful protesters.

“We’re going to continue to do our jobs the way we’ve done it,” he said. “We respect peaceful protesters. We understand the judge’s order and we’ll make sure the protesters understand if there’s any aggression or violation of law, they will get ample notice like we’ve done in the past.”

The lawsuit claimed that some of the officers’ use of force had left some protesters hospitalized.

For once, I agree with Kamala Harris, though for completely different reasons. On Saturday, the Democrats’ vice presidential nominee told CNN’s Dana Bash that she would not listen to President Trump if a vaccine is released before the election.

“So, let’s just say there’s a vaccine that is approved and even distributed before the election,” Bash said. “Would you get it?”

“Well, I think that’s going to be an issue for all of us,” Harris answered. “I will say that I would not trust Donald Trump and it would have to be a credible source of information that talks about the efficacy and the reliability of whatever he’s talking about. I will not take his word for it.”

As long as we can vote in person, I’m all for just about whatever means are necessary to make it happen, even if that means not getting out of our cars. According to the LA Times:

Honda Center in Anaheim will serve as a polling place for the presidential election, with all Orange County citizens invited to drop off ballots there or vote in person — either inside the arena or inside their vehicle.

Honda Center will be a one-stop voting location from Oct. 30 through Election Day, Nov. 3.

“We’re going to have a very large setup inside of the Honda Center,” Kelley said, “as well as drive-through lanes in the parking lot.”

My interview with congressional candidate in Sacramento Chris Bish premiered in this episode and will be part of Freedom Discourse soon.

Lastly, I discussed why President Trump needs an unambiguous landslide victory in November. There are many reasons, including what was detailed in an excellent article in American Mind by Michael Anton titled, “The Coming Coup?” It explains how Democrats and the Deep State are laying the groundwork and planting the seeds they need to challenge election results when they lose in November.

This really is the election of our lifetimes. Patriots need to be focused on getting the truth out there as mainstream media continues to spread lies.

With 2020 already demonstrating it has no regard for civility or common sense, it’s important that American patriots understand the challenges coming out way. Today’s show is just the tip of the iceberg for us all.

Liberticidal leftists: You don’t need to buy a gun because the riots aren’t real