CNN often pivots from fake news to fake drama, but the latest goof from pravda media is quite the meaty one. In an attempt to perpetuate the false image of Trump being this morbidly obese tyrant, CNN instead makes him more likable. Prior to President Trump’s arrival to India, CNN published this lovely piece to foreshadow a dismal visit the the world’s largest democracy. 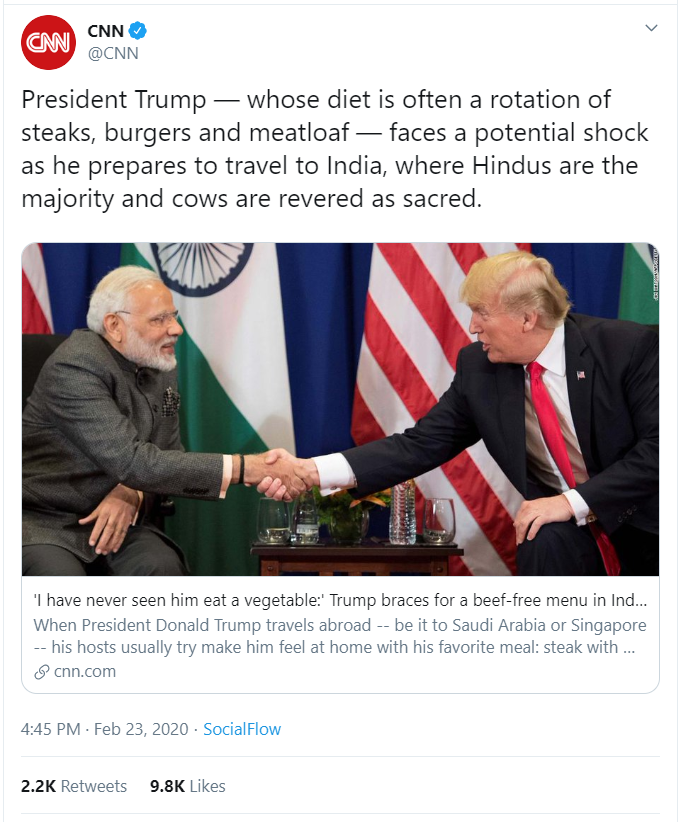 Only it did not work. Not only has Trump’s visit to India, thus far gone smoothly, the propaganda CNN is pushing is surprisingly great for Trump’s image. Who is more relatable: Joaquin Phoenix lecturing Americans about the depravity of milking a cow or Trump’s alleged all beef diet?

As someone whose daily dinners once mostly consisted of burgers and cheesesteaks, Trump’s meatloaf, burger, and steak diet does not seem far removed from where I was at one point, and Meat Eater is currently my favorite reality show. Moreover, Trump’s diet is also down to earth unlike veganism. Meatloaf was a staple suburban meal when Trump was a child, burgers are a food that transcends time and space, and steak is a luxury that never places someone beyond the reach of a fellow American.

And while CNN would probably like to make an environmental point about cow farts, (don’t know I’m not clicking that bait) while also portraying Trump as a pig American, one cannot help but laugh at the irony of a beef eating American going to India. It’s a laughable struggle that makes Trump more likable. I say this as someone who eats Indian food regularly and doesn’t know what I’m eating, so the culture shock is something I empathize with.

CNN wanted to make Trump seem culturally inept, but ends up making him seem like an all around American. Nothing says America First like eating beef every night knowing you have a trip to India coming up. Trump’s alleged all-beef diet is among what makes America great along with the underlying Christian influence that allows us to eat all animals… except dogs.

Join fellow patriots as we form a grassroots movement to advance the cause of conservatism. We have two priorities until election day: Stopping Democrats and supporting strong conservative candidates. We currently have 7500+ patriots with us in a very short time. If you are interested, please join us to receive updates.

Why SEC charges against Mark MacArthur, son of pastor John MacArthur, matter to the church