Fighting Cultural Marxism: Pastor Erwin Lutzer will not be silenced and neither should any Christians

From the rise of Cultural Marxism to the political attacks being perpetrated against conservatives and Christians, Pastor Erwin Lutzer from The Moody Church called on Americans to stand up and stop being silenced. He joined us today on NOQ Report and discussed his latest book, "We Will Not Be Silenced: Responding Courageously to Our Culture's Assault on Christianity." Compliance with the "woke" left will not be rewarded by cancel culture. It's time for Americans to fight back or be silenced forever. 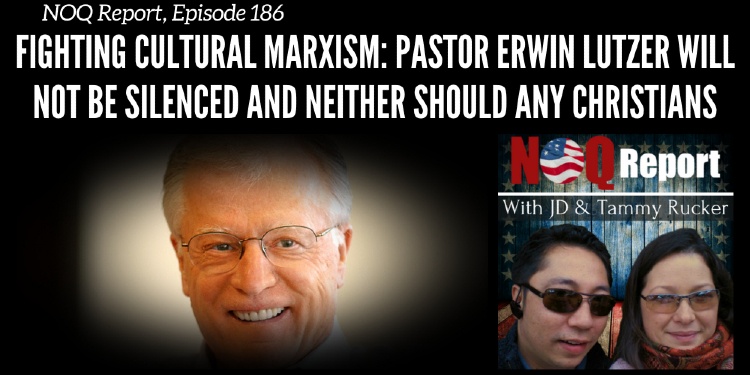 There’s a very good reason Dr. Erwin Lutzer, Pastor Emeritus of The Moody Church, refuses to be silenced. He does not abide by the “woke” culture that is spreading across America because it goes against the higher power that Dr. Lutzer holds dear. He is beholden to God and therefore refuses to be silenced because the teachings of the Bible tell us to be bold with our faith.

With his latest book, We Will Not Be Silenced: Responding with Courage to Our Culture’s Assault on Christianity, his penchant for publishing about the most timely topics is in full display. It was written before many Christians realized what we’ve learned very clearly in the past few months, that our voices are being suppressed across the board. Through mainstream media, social media, and even in our real world interactions, espousing a Biblical worldview can make us targets of silencing and cancelation through the assault by Cultural Marxists.

In the latest episode of NOQ Report, Dr. Lutzer took time to sit with me virtually and discuss some of the events happening today that should concern Christians. And by “concern,” that’s not to say he believes we should fear them. We must take them into consideration in our ongoing efforts to spread the Gospel and do the righteous Will of God.

But it’s not just about getting banned on Twitter or being told to keep our faith to ourselves at work. There is a concerted attack underway against the youth of America to indoctrinate them into an anti-American and anti-Biblical worldview.

“One of the reasons that the Judeo-Christian history of the United States is being vilified is because of the fact that, as I mentioned, they want to put America on a different foundation,” he said. “Now, this is important. One of the reasons that I wrote it is so Christian parents can understand why it is that when they send their children to college and university, why do they come back hating America?”

Arguably the biggest challenge facing Christians is an internal one. We, as a church and as a nation, have grown complacent about our freedoms, particular our right to worship. This complacency prompted many to stay on the sidelines, avoid conflict, and take our eyes off of political concerns. Now, we’re seeing our lack of action is coming back to haunt us.

At one point in the interview, Lutzer references a quote often attributed to Winston Churchill. “An appeaser is one who feeds a crocodile, hoping it will eat him last.” There are too many “appeasers” in American society today. This translates into lukewarm political and religious adherence; Christians and conservatives often try to “appease” the left thinking they will be spared from the attacks of Cultural Marxists.

Our Judeo-Christian heritage is under direct attack as the Cultural Marxists and radical progressives attempt to quash us. This is the moment we need to stand up and follow the guidelines of the Constitution and the teachings of the Bible.

His book, We Will Not Be Silenced: Responding with Courage to Our Culture’s Assault on Christianity, is available at Christian Books, Amazon, and wherever books are sold.

Dr. Erwin W. Lutzer is the Pastor Emeritus of The Moody Church, where he served as the senior pastor for 36 years. A graduate of Dallas Theological Seminary and Loyola University, he is the author of numerous books, including the Gold Medallion Award winner Hitler’s Cross and the best-seller One Minute After You Die. He is also a teacher on radio programs heard on more than 700 stations throughout the United States and the world, including Songs in the Night, The Moody Church Hour, and the daily feature Running to Win. He and his wife, Rebecca, live in the Chicago area and have three married children and eight grandchildren.