The Biden Regency has assumed power over the United States. Trump exits with a whimper while the Biden Regency unveils multiple first-day executive orders that undermine America’s sovereignty. With Joe Biden’s obvious dementia and malleable policy proposals, there is clear reason to believe that Joe Biden will not actually be the one running the United States of America, despite having title. CCP propaganda outlets vocalized their celebration of Trump’s exits.

Every Presidential candidate, in this era, has a slew of day-one promises. Joe Biden appears to have set the tone from day one with executive action. He signed 17 executive orders. Here is a list below. 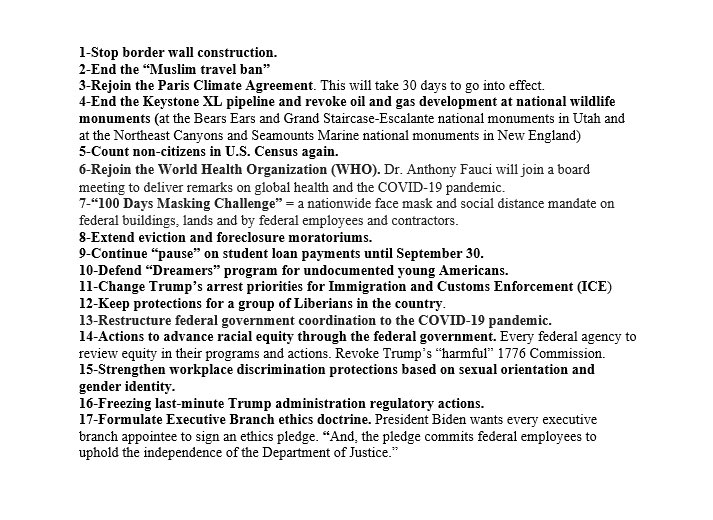 Majority of these undermine American sovereignty. Rejoining the Paris Accord sends hundreds of millions of dollars overseas, so that we can pay for other countries to build green energy. America will rejoin the World Health Organization which proved in 2020 to be a Chinese puppet, the reason the Trump Administration left. And of course, the Democrats dream of irreversibly changing the voting demographics of this country with illegal immigration comes steps closer to full realization. The cultural impact is there as well. The end of the 1776 Commission, Trump’s effort to combat Critical Race Theory, means woke ideology will become policy.

The biggest benefactor of this is China. One of the Trump administration’s final acts was to label the Chinese extermination of the Uighurs as genocide. It will be interesting to see how long the US government maintains this position. But for the Chinese, they have a President who is bought and paid for. The Hunter Biden escapades overseas in Ukraine and especially China show how compromised this regency already is. When I said, we were living in Star Wars land, prior Big Tech’s execution of Order 66, that includes the notion of a Phantom Menace. Many have speculated that a Biden Regency will be a third term of the Obama Presidency or that Kamala Harris or perhaps Nancy Pelosi will be pulling the strings. But Xi Jinping is the Phantom Menace that the Biden Regency will ultimately benefit.

America is the last thing preventing China from asserting itself as the dominant world power. The world’s largest population paired with a quickly modernizing economy means that America’s days were numbered if unable to combat the rise of China before their numerical advantage becomes insurmountable. It requires America have a more aggressive posture and repair its culture from that which has fueled this declining state. But already the Biden Regency is quick to feed America’s decline with pagan prayers, open borders immigration policy, and supporting China’s geopolitical agenda with the WHO and the Paris Accords. America is China’s vassal not because we were beaten in battle but because we aren’t going to stand in the way.