I’m 90% certain Trump will win. The reason for my 10% uncertainty will likely surprise you.

My confidence in President Trump's eventual reelection is based on a preponderance of evidence that seems blatantly clear. But there's a chance the forces arrayed against him will not allow the truth to come out. There's also a slight chance he simply doesn't want to be president anymore. 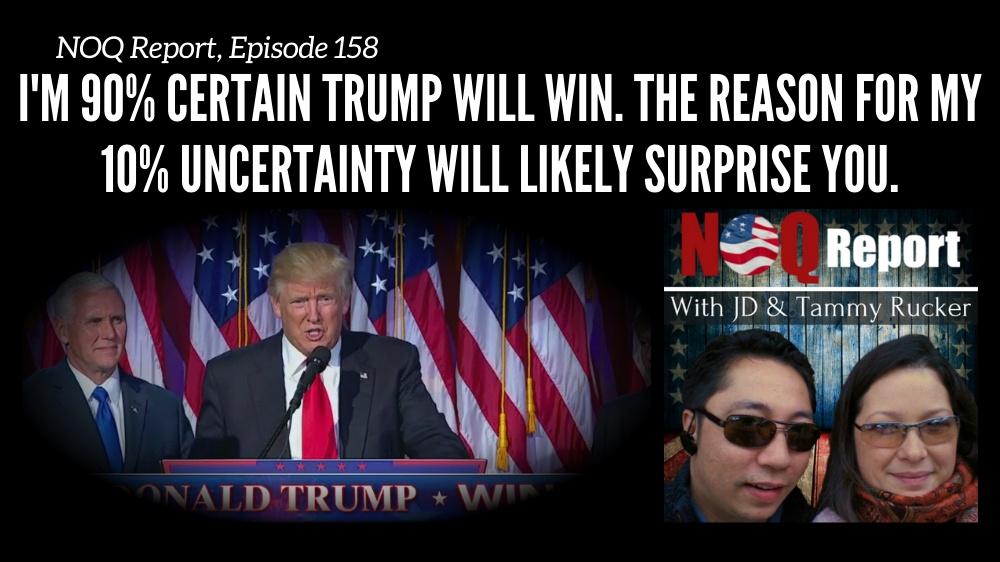 Everyone seems to be in their own little bubble right now. Those of us who are watching the various hearings before state legislatures, who read the articles and watch the videos detailing clear and rampant voter fraud, know in our hearts that President Trump has been cheated. In the other bubble are those who believe a man who wasn’t very popular with his own part was somehow able to get 13 million more votes than the extraordinarily popular President Obama.

Knowing the evidence that’s on our side and the people who are pushing that evidence forward, I’m still at 90% sure President Trump will be reelected. But there’s a lingering doubt. It’s actually two-fold. The biggest part of my doubt surrounds the forces that are behind this coup attempt. As I’ve said on multiple occasions, if this is just the Democratic Party with a little assistance from foreign actors, I know that mainstream media and Big Tech will not be able to sway the legislators, electors, and Supreme Court Justices enough to keep the truth bottled up forever.

BUT, and this is a big “but,” if the forces behind the coup are bigger than the DNC, bigger than a handful of foreign actors, than there’s a chance we will have the truth suppressed and Joe Biden will be the next president. To the faithful, we’ll call these forces the “powers and principalities” mentioned in Ephesians 6:12. To the conspiracy theory buffs, we’ll call it the New World Order or the Illuminati. To everyone else, we’ll call it the powerful players of the world who control the radical left and the globalist agenda, people like George Soros and Michael Bloomberg as well as entities like the Chinese Communist Party and the United Nations.

When I explain it like that and considering how much information has been suppressed so far, one might wonder why I’m only at 10% against President Trump winning. I have to be. Looking at the evidence, it’s a huge stretch of the imagination to believe they will be able to pull this off even knowing the forces may be much bigger than most people realize. I discussed this in-depth on the latest episode of the NOQ Report.

Lastly, there’s one other possibility that has an extremely low chance of being accurate. But since I cannot completely debunk it, I need to mention it. What if President Trump wants to move on? No, he would never allow himself to lose intentionally, but in this scenario he can be viewed as the winner while not having to serve a second term. He could go on to build the Trump News Network or whatever else he would want to do without the constraints of the office of president.

The massive amounts of evidence that continue to flood in every day tells us the truth is coming to light. The only way it doesn’t demonstrate that President Trump won is if the evil forces behind the coup are bigger than we realize.

Dalio: The United States is at a tipping point that could lead to revolution or civil war