Roy Moore is really Alabama versus the world

by Steve Berman
in News, Politics

Roy Moore’s entire career, and his troubled senate campaign are a metaphor for Alabama’s political and cultural relationship with the rest of America. Alabamians do things their own way. Many states claim this, but few deliver in this fashion.

Moore was twice suspended (removed, really) from the Alabama Supreme Court as chief justice. First he was suspended for refusing to remove a two-and-a-half ton statue of the Ten Commandments from the lobby of the state judicial building. That was in 2003, and the statue was removed on a federal court order anyway.
Then Moore tried to run for governor, twice, and failed. In 2012, he won the Supreme Court chief justice gig again. And in 2016 he refused to comply with Obergefell v. Hodges, and got himself removed again. Permanently.

Is it about religion?

Roy Moore holds himself to be a faithful Christian. An evangelical Christian. One who believes the Bible exclusively, and applies those exclusive claims to truth to his legal analysis. The Founders would not have been pleased with him, despite many who think Moore is being faithful to the Constitution.
Judges are not appointed or elected to interpret laws Biblically. Roy Moore has built his career and persona doing exactly that. He has stood against judicial supremacy and federal hegemony, but most outspokenly in the areas where it conflicts with his religious beliefs.
Religion is important in Alabama, but Alabamians are hardly a state full of saints. Look at the sex scandal that took down Gov. Robert Bentley and the corruption conviction that ousted House Speaker Mike Hubbard. In the last 18 months, Alabama lost its governor, speaker, and chief justice. Even Attorney General Jeff Sessions and lame-duck Senator Luther Strange were implicated in this enormous web of corruption.
Moore was the lone figure who wasn’t removed for Biblical prohibitions and sins. But that’s not really what makes Moore popular.

What it’s really about

Alabama is the poster child of federal muzzling and leashing of a state.
After the Civil War, during Reconstruction, Alabama fought its own civil war. Cotton crop failures in 1865-66 and the federally-enforced rights of former slaves brought economic chaos to Alabama, and both the Unionists and returning Confederates used local courts to prosecute their enemies for wartime activities, or to force those enemies to leave.
Then in March 1867, Alabama was assigned to the Third Military District under federal Congressional Reconstruction, forcing the state to comply with full suffrage and craft a new constitution. Delegates to the constitutional convention were apportioned to racial demographics, with 18 African Americans attending, and the rest of the whites were Unionists who favored full suffrage, equal educational access, and equality in law. That’s what they put into the constitution they drafted.
Alabama voters rejected it. Congress responded by changing the terms of the ratification procedure, overriding the boycott of pro-Confederate whites. Republicans (who were the party opposed to slavery) were placed in all key positions including the governorship, and the white citizens responded with violence.

Several Republican legislators were killed. Governor Smith, facing near-insurrection, rejected close identification with freedpeople and lifted all limitations on former Confederates holding office. His basic priority was to reconcile ex-Confederate whites to his administration through non-partisan behavior. He denied reports of Klan activity, refused to arm a state militia, and opposed federal antiterrorist legislation, even after it became clear that local officials were thoroughly intimidated. He denounced northerners in his own party as “carpetbaggers” and thereby encouraged a split between moderate white Republicans—Smith’s “scalawag” faction, as it was called—and radical Republican carpetbaggers like U. S. Senator George Spencer, the leader of the state’s pro-civil rights faction.

When Reconstruction ended in 1874, Alabama went Democrat and never looked back until the mid-1990s. The heavy hand of the federal government, and carpetbaggers, had been thrown off. In 1875, most of the civil rights guaranteed in the 1867 constitution were rolled back, not to be revisited for another century.
Alabamians hate, with a burning visceral contempt, any control by Washington, D.C. Roy Moore personifies this hatred.

If the pundits, journalists and politicians in Washington D.C. want Roy Moore to step down, Alabama voters are more likely to want him elected. If Mitch McConnell says Moore will be expelled if seated, Alabamians will reply “screw you, Mitch.”
Everything happening with Roy Moore, from an Alabama voter’s point of view, is simply more federal carpetbaggers telling them what to do, who to elect, and how to live. Alabama voters, even the ones who don’t agree with Moore’s religious stance, don’t take kindly to that kind of lecturing from outsiders. There’s been a whole lot of lecturing about Roy Moore, if you haven’t noticed. It doesn’t matter if they’re right, if you haven’t noticed. Being right has little to do with it.
This is the reason the Alabama GOP has refused to step away from Moore. They know.
David Drucker wrote today in the Washington Examiner:

Perry O. Hooper Jr., a veteran Republican insider in Alabama who led President Trump’s 2016 campaign in the state, said GOP insiders there are sticking with Moore.

“The people of this great state are not buying into this gutter-style politics,” Hooper Jr. told the Washington Examiner in a telephone interview. “Roy Moore and his sweet wife and his family are going to have to weather the storm.”

The Alabama Republican Party’s steering committee was to meet in coming days to discuss what to do about Moore. Hooper predicted nothing would come of it, estimating that around 70 percent of the 21-member panel would not abandon him, based on regular conversations with them.

Those party members know what will happen if they abandon Moore. The voters will react much in the same way they did in 1867. Violence has been, at times, a hallmark of Alabama politics. Removing Roy Moore will again test the will of voters sick of being told what to do and how to do it.
Moore knows it and he’s banking on it. He stands with the voters yelling “screw Washington.”

This mindset explains why someone paid for a robocaller with a message from “Bernie Bernstein of the Washington Post” (a fake name) offering $1000 for women of a certain age to come forward with stories about Moore. It explains why Noah Feldman (a real journalist) lecturing about Moore’s hypocrisy and fitness for office is poorly received in Montgomery, Birmingham and Gadsen. It’s not anti-Semitism per se. It’s the stain of northern carpetbaggers.
For many in Alabama, the civil war never really ended. It’s Roy Moore against the carpetbaggers. It’s them against Washington. In fact, it’s bigger than that.
The war is and has always been Alabama versus the world.

Alabama Republicans, fearing Roy Moore’s base, decline to push him out of Senate race

Fearing a backlash from Roy Moore’s loyal political base, top Alabama Republicans are resisting national calls to push the retired judge out of a key special Senate election set for Dec. 12. Moore, a 70-year-old, fiery social conservative who enjoys the strong support of evangelicals, is under fire for multiple allegations of sexual misconduct with teenage girls that occurred decades ago. Senate Republicans are threatening to expel Moore if he wins. 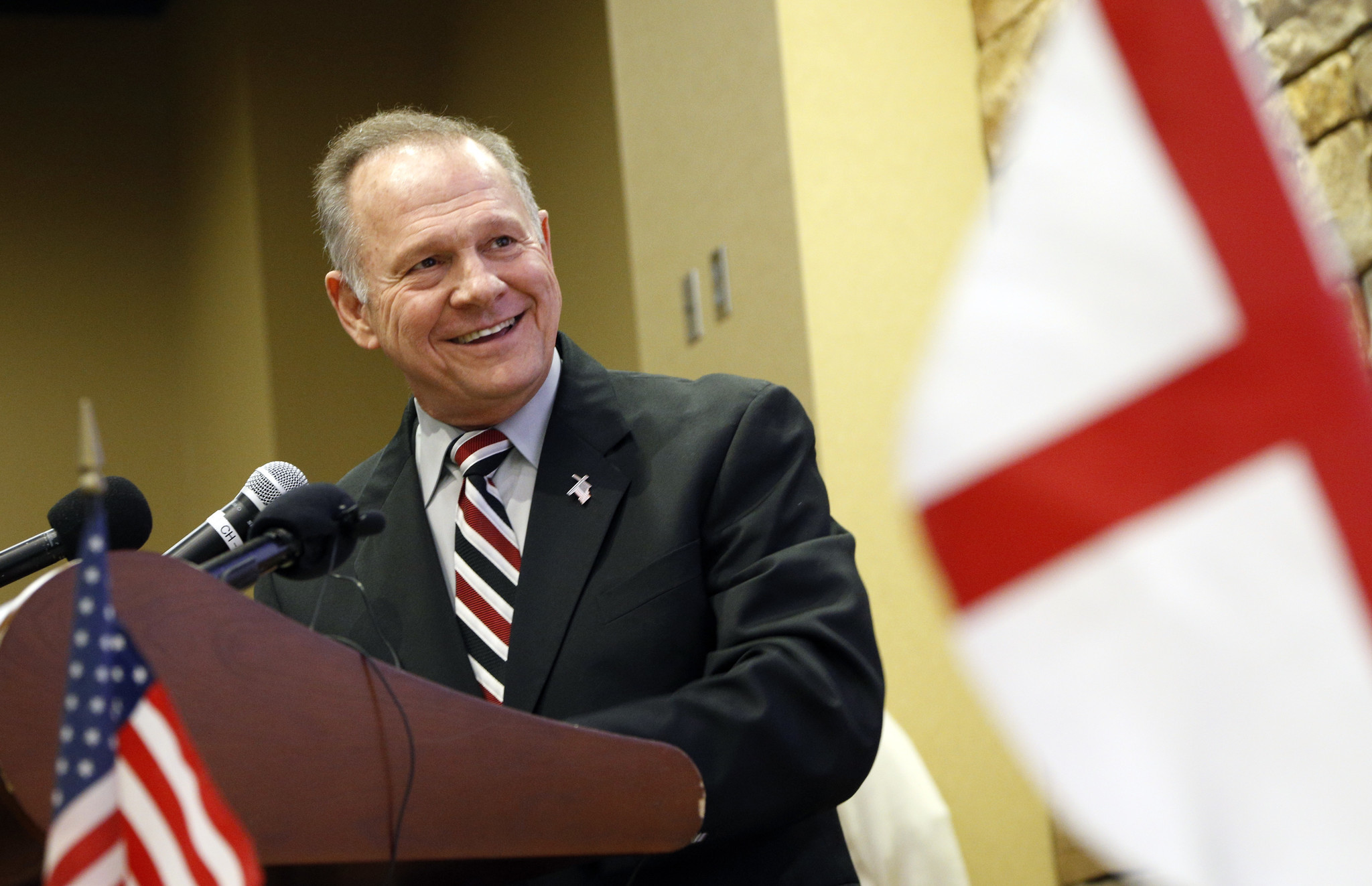 To anyone who’s been following Roy Moore for the past 15 years, there’s a single question that won’t go away: Why are we here? The point of a free press is to inform the public about the character and the beliefs of the people they will be voting for. In fact, there is something deep about the reality that Moore’s public career wasn’t ended by his earlier defiance of the rule of law yet now appears likely to be ended by his sexual conduct.

Congressional Reconstruction was the period after the Civil War in which the federal government enacted and attempted to enforce equal suffrage on the ex-Confederate states. In Alabama, this period lasted from 1867 to the end of 1874 and was characterized by racial conflict and widespread terrorist activity. Alabama’s experience was broadly typical of other southern states, but it was notable for the relative moderation of African American demands and the importance of economic issues, and specifically railroad development, in the outcome.

According to Pew, 86 percent of Alabama residents identify as Christian, and 49 percent as evangelical Protestants. Perhaps propelled to victory by that Christian base he has long catered to, Moore won the Republican nomination even though he was vastly outspent and lacked the support of his president or the establishment. Ten Commandments controversy The first suspension from the court came in 2003, when Moore disobeyed a federal judge’s order to take down a 5,200-pound statue of the Ten Commandments from the lobby of the state judicial building.

What began as a sex scandal that cost him his 50-year marriage ended with Alabama Gov. Robert Bentley’s (R) resignation Monday, hours after he pled guilty to two misdemeanor crimes.   Bentley’s departure comes as the state House kicked off impeachment hearings Monday, the first time in state history the legislature began the formal process of removing the governor. Those hearings came after the Alabama Ethics Commission determined there was probable cause that Bentley had violated campaign finance rules.

The charges against Hubbard include 23 class B felonies. According to the indictment, Hubbard solicited favors from some of Alabama’s rich and powerful. In a video posted to Facebook, Hubbard called the indictment political.

The Lawlessness of Roy Moore – The Atlantic

Both sides of my family hail from Alabama: my mother’s people from the coal mining country of Walker County in the north and the tiny burg of Union Springs farther south; my dad’s, from a speck of a cotton-mill town just east of Montgomery. I did not need Hillbilly Elegy to tell me about the alienation that working-class whites—especially in rural, economically challenged areas—feel toward the sneering, culturally blue swaths of the nation. Alabama is a deep-red state, and its elected officials should reflect that disposition.

The Alabama Supreme Court today upheld the decision that removed Roy Moore from his position as chief justice.   The Alabama Court of the Judiciary on Sept. 30, 2016 suspended Moore for the remainder of his term as chief justice after finding him guilty of six charges of violation of the canons of judicial ethics. The charges were brought and prosecuted by the Alabama Judicial Inquiry Commission.

Washington DC is creating a hotel for the Trump resistance: Why this is scary for our country