The NFL 'Anthem rebellion' is quelled. It was over before it began

There are only two real possibilities here for each NFL team this coming Sunday, in Week 4 of the season.
1. Everybody kneels or no-shows
2. Everybody stands
Of course, there are exceptions to this, but no real shades of gray. One kneeling or sitting player is simply another Kaepernick, who will earn fan derision into eternity. One standing player when all others are in the locker room will become an instant hero, with the rest of the team made to look like cowering simps. We know this from Week 3, and so does the NFL, the players, the management, and the owners.
There are some hints of surrender. I say the “Anthem rebellion” is over. President Trump has won.
I think it was never really in doubt, because the president has a preternatural sense (for a liberal New York billionaire) of how the pulse of America feels on many issues. Without getting into raw speculation, 4D chess, or Scott Adams’ theories on persuasion and perception, I think Trump eats and drinks media and eschews analysis. His gut has been trained on how to do this for 40 years. He knows in his knower.
The first white flag came from the New England Patriots.

All Patriot players will stand this Sunday during the National Anthem, a league source told me.

The Carolina Panthers, who are playing the Patriots, will also be standing. Team by team, most of them will end up showing up, and standing for the anthem. Some holdouts will do their own thing, and nothing will be done about it. The media will focus on those things, but the media also got called out for telling camera operators not to show booing fans.
Unfortunately, the ratings aren’t rigged to lie like that. Advertisers know what the public wants, when they’re burning memorabilia, getting refunds on satellite TV packages and overall tuning out.
The Baltimore Ravens are mum on what they’re going to do, and that in itself portends surrender.

All Patriot players will stand this Sunday during the National Anthem, a league source told me.

The Patriots will play the Carolina Panthers, who reportedly will also be standing. Trump has called for a ban against protesting the national anthem in the NFL. The league has also seen its fair share of fan backlash involving disgruntled fans burning their jerseys and broad drops in the ratings.

One fan plans to wear his Ravens jersey inside out. Others talked of selling once-prized tickets or leaving their seats following the national anthem. The Ravens and rival Pittsburgh Steelers have played 46 times but never quite like they will on Sunday: when the outcome of the contest will compete for attention with whether players will kneel again during the anthem and how fans will react.

It’s an 8% dip from the early numbers of last week’s game, Atlanta’s 34-23 win over Green Bay. Still, NFL ratings are down double-digits this season so far after taking a similar tackle-for-loss last year. Add to that, Sunday’s game was the worst a Week 3 SNF has done in 11-years.

Aesthetics are everything to a message, and it wouldn’t do well if the networks showed the NFL kneelers — the media’s latest favorite fad — receiving boos and disapproving shouts while it was going on. The league saw this weekend’s unprecedented anthem coverage as a golden opportunity to demonstrate unity among players, coaches and owners — and opposition to Trump’s comments. Of course, in today’s era, when everyone and their dog has a camera that can display anything to everyone at that very moment, that “golden opportunity to demonstrate unity” narrative was bound to collapse faster than a house of cards in a wind tunnel. 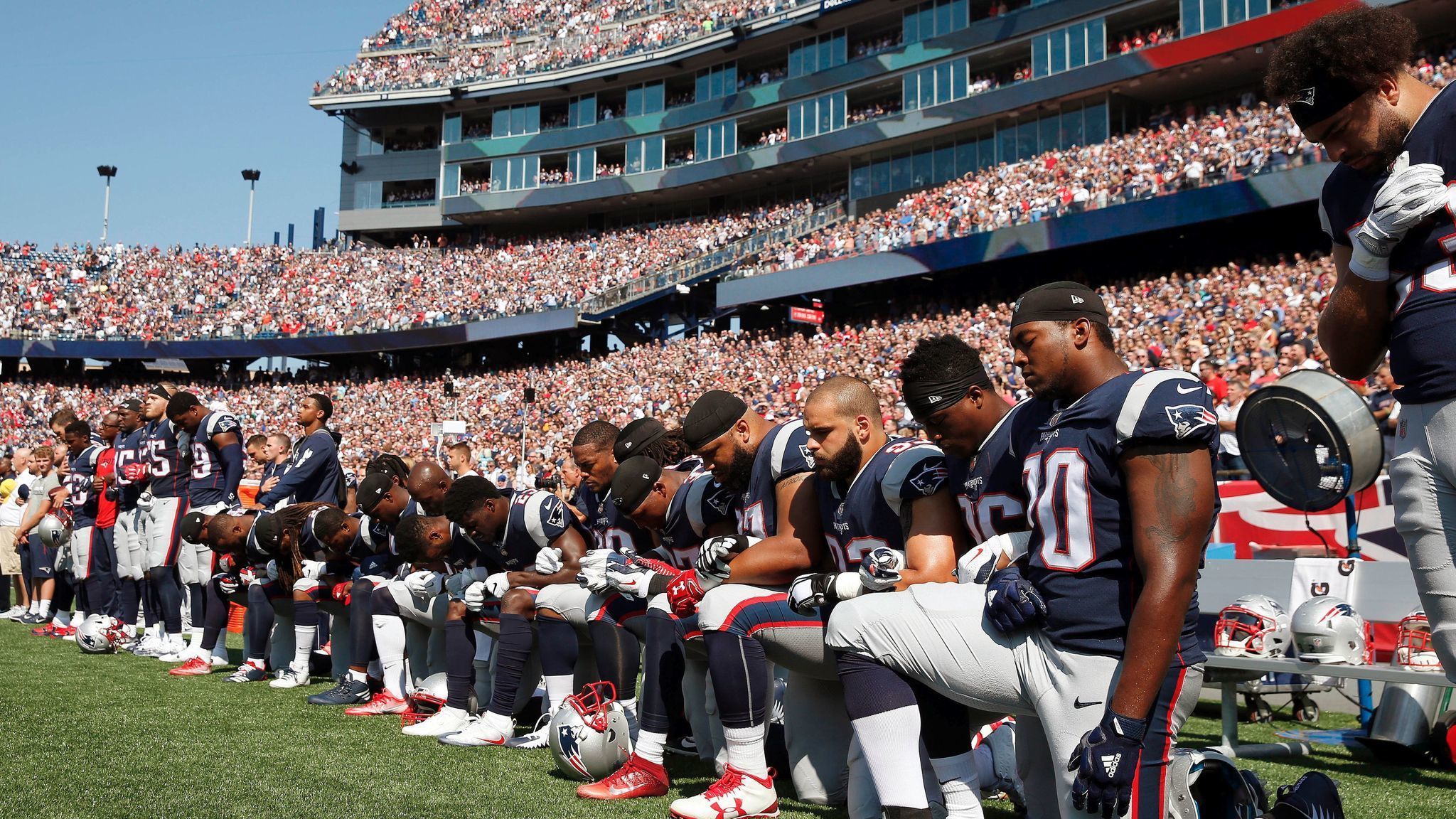 DirecTV subscribers who want to drop the NFL Sunday Ticket because of the protests during the national anthem before games are being offered refunds, according to multiple media sources.

The Wall Street Journal also spoke with some DirecTV subscribers who indicated the same. I just wanted to make a point.” The Journal noted that DirecTV had varying responses regarding the refunds. The Sunday Ticket package can cost close to $300.

NFL protests updates: A team-by-team look at the NFL vs. Donald Trump – CBSSports.com

There are countless examples of the positive influence and extraordinary impact these players have on our community. Football is something that has always united us as Americans and, particularly in times like these, has the ability to inspire rather than divide. It’s a brotherhood in the locker room, we’re out in the community, and we know ourselves.

Thus endeth the rebellion. For the NFL players, this ended worse than the Dorr Rebellion in Rhode Island in 1842, where the stolen cannon didn’t fire and the rebels scattered to the winds. It was a victory for Donald Trump, but most of all, it was a victory for the fans. The NFL and teams, collectively, have been screwing their fans for decades.

Think about it: the NFL is a sport where practically every player is a millionaire, every owner (except the oh-so-holy-and-grandfathered Green Bay Packers) a billionaire, most of the game officials are lawyers doing the job as a part-time gig, the league president is also an attorney, and everything the relatively small club of rich people do is designed to extract money from the very people they are all supposed to be entertaining. My father would have called it (and probably did at one point) “a racket.”

Finally, they’ve done something so distracting and deleterious to the game to incite fans, en masse, to depart and break the emotional bonds forged over generations to their teams. Of course, when teams pack up and move over extortion demands for new, ever-more-luxe stadiums anyway, that does tend to harm the marriage between fans and teams.

It doesn’t matter whether fans agree or disagree with Trump–most disagree. It’s the game of football that won here, and Trump was on the winning side. Trump chose the winning side before the battle even begun.

In fact, the battle was over before it began.

We need help. I don’t want to say “desperately,” but the need is definitely great. If you have the means, please donate through our GivingFuel page or via PayPal. Your generosity is what keeps these sites running and allows us to get the truth to the masses. We’ve had great success in growing but we know we can do more with your assistance.