While America talks about taking a knee, North Korea plans our destruction

by Scarlett Madison
in Opinions

As JD Rucker noted yesterday, President Trump and the media have America’s collective attention turned towards childish athletes and how Americans should handle the dishonor they bring to this nation. It’s a big topic, but it’s not the topic that should be dominating our current news cycle.
We should be talking about Obamacare, Iran, the new travel ban, and dozens of other important topics, but the threat posed by North Korea is, in my humble opinion, the most important topic right now. It’s an existential topic, one that has potential consequences that reach much further than whether or not we should watch football on Sundays.
Kim Jong-un is a mad man who might have nuclear weapons capable of hitting our allies at the very least and the mainland United States in the worst-case-scenario. The words sent back and forth last week during and after the United Nations summit were more than rhetoric. They truly want to destroy us. When the least-predictable world leader thinks he needs to destroy America, this shouldn’t be a topic relegated to page 3. The NFL #TakeTheKnee story is a cultural blip on America’s radar… at least it should be.
A North Korean ambassador declared that an attack on the United States is “inevitable.” This is far worse than the aggressively defensive stance the isolated nation has taken in the recent past. Meanwhile, the White House is making it crystal clear that all options, including a preemptive military strike, are on the table. We even buzzed North Korea over the weekend with a bomber and a squadron of fighters to remind them we’re here and we can take them down.
Before our patriotic nature kicks in and we start calling for Neocon-level interventions, we need to look at the situation for what it really means. Depending on how thing go down, it’s very possible that any military conflict with North Korea could be the first domino that brings in China, Russia, and other interested nations. We’re not talking about an isolated MOAB being dropped in Afghanistan. We’re talking about a major world power with tenuous but intact relations with the largest nation on the planet.
Do not take this lightly. We could be on the brink of a world war. We’re actually closer to that being the case than we have been since the end of the Cold War. The difference is that today we have a truly deranged man with the ability to force our hand sitting in Pyongyang. We also have President Trump on the opposite side who seems to be much more hawkish than he claimed to be during the 2016 campaign.
Take a look at these perspective stories below. Share them. It’s time to turn the conversation away from football players and start focusing on the important topics of our day. North Korea is at the top.

North Korea’s foreign minister was front and center in the highly coveted Saturday afternoon slot to give his speech to the UN General Assembly. He did not disappoint. Apparently, someone threatening to nuke us is not important enough to merit a transcript so I’m working from several news reports.

Steven Mnuchin reiterates ‘all options on the table’ against North Korea

President Trump has asserted a strike by North Korea against the United States or its allies would be met with an overwhelming response. During United Nations remarks this week Trump referred to Kim Jong Un, the North Korean leader, as “Rocket Man” and warned of potentially obliterating the country. 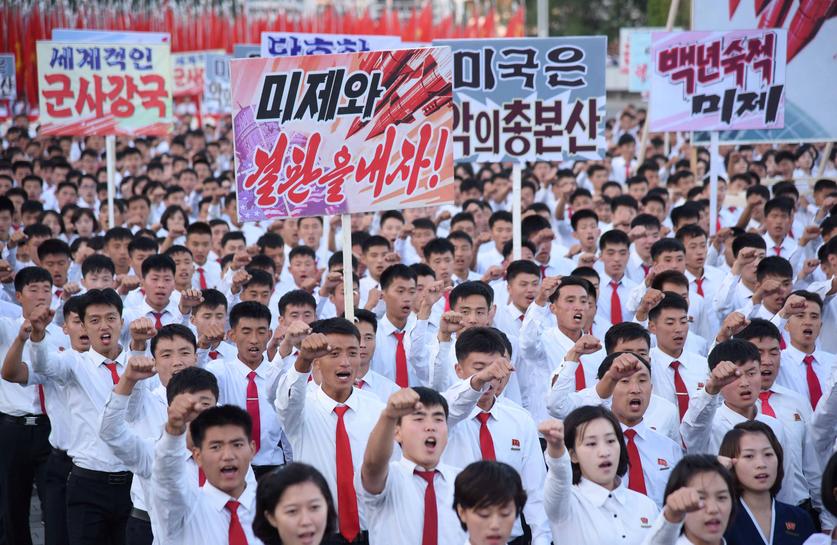 Trump: NK May Not ‘Be Around Much Longer | The Daily Caller

Speaking in Alabama Friday night, the president said that the U.S. will handle North Korea because “we can’t have mad men out there shooting rockets all over the place.”

Can America Convince China to Subdue a Nuclear North Korea? | The National Interest

Context: Trump called Kim Jong-un “Rocket Man” in a recent tweet, which he restated during his UN speech, saying “Rocket Man” is “on a suicide mission.”

A huge crowd gathered Saturday in Pyongyang’s Kim Il Sung Square, named for the current leader’s grandfather and founder of North Korea. They listened to speeches from senior officials excoriating the United States and its president.

It’s impossible to predict precisely the effects of a North Korean nuclear blast because so much depends on the type, size and method and elevation of the detonation, says Danny Lam, a Calgary-based defence analyst with a PhD in environmental engineering.

In Pyongyang, where anti-U.S. sentiment runs high, a rally was held in Kim Il Sung Square on Saturday. According to the official news agency, KCNA, tens of thousands attended to hear speeches from fired up officials, while demonstrators held up signs that said, “Death to the American Imperialists,” and others shouted about the total destruction of America.

Prepper Meds – Stock up for now before the supply chain crashes:
✔️ Boost your immune system with Nutraceutical by Dr. Zev Zelenko
✔️ Get ahead of shortages with 5 Antibiotics Delivered to Your Home
✔️ Detox your body with Organic Supplements
It behooves patriots to acquire physical gold and silver or make the move to self-directed precious metals IRAs from America-First companies that do not donate to Democrats. Go to Our Gold Guy for the personal buying experience with Ira Bershatsky. Go to Genesis Gold Group, a Christian fellowship-driven precious metals company. Or go to GoldCo for peace of mind from a bigger company.

Thank you Donald Trump for saving the national anthem