Dr Cordie Williams: Conservatives, now is the time to start a movement 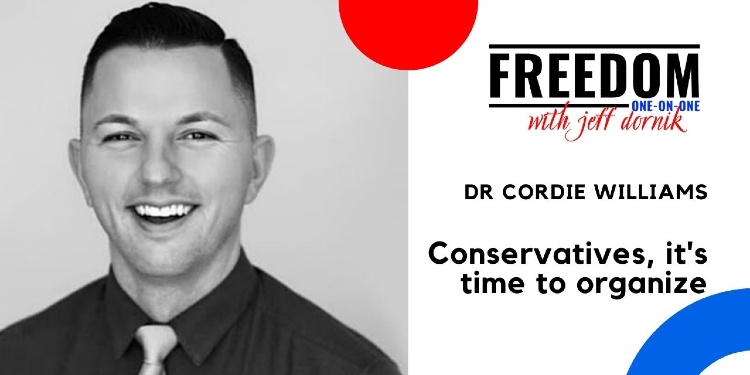 Dr Cordie Williams, also known as the Megaphone Marine, shares his view on the future of the Conservative Movement during this episode of Freedom One-On-One. One of the most important things that we need to focus on is organizing, which has been an historically glaring weakness of the Right. The Left is great at organization, which has allowed them to mobilize around their pet projects. Conservatives, because we are more individualistic, have a more difficult time creating a long-term movement. However, if there was ever a time for this, 2021 is it!

For many, including Cordie, there are a lot of parallels between what our Founding Fathers fought against leading up the Revolutionary War and what we are facing in America today. Taxation without representation, no personal property rights and a devaluing of life. Very similar to what we are experiencing now, with our Constitutional Rights being undone before our eyes.

Our Founding Fathers intended for our nation to be one of self-government, giving the most power to the individual and the most restrictions on the Federal Government. Unfortunately, we are living in an inverted America, especially now that Joe Biden is president and systematically stripping away our Constitutional Rights. If we are going to save our nation, we are going to have to organize and create a movement that cannot be stopped. If we do not accomplish this mission, America is facing the point of no return.