With impeachment over, Donald Trump MUST reengage in the voter fraud scandal

There are voices on both sides of the aisle calling on President Trump to "move on" and focus on the future. But there are three important reasons this would be a mistake. He needs to bring forth the truth about voter fraud because every effort on his behalf has been quashed. 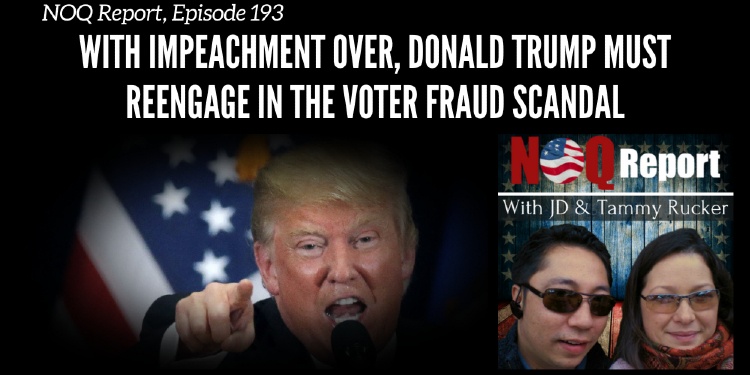 The left wants President Trump to be convicted of… something. Anything. They’re desperate to place the blame for everything bad that has happened under his watch and everything that will happen under Joe Biden’s watch. If that were the whole story, Donald Trump would have plenty of incentive to reengage in the sharing of information regarding massive voter fraud in the 2020 election.

But that’s not the whole story. It gets worse. Many on the right are pushing for him to move on and focus on the midterm and 2024 elections. They want him to either fade into the shadows or actively engage in Republican politics. Those are the semi-patriotic but feckless leaders of the GOP who still want to ride his coattails, and as semi-despicable as they are, they’re not the worst side of the Republican Party. The Mitch McConnells and Adam Kinzingers of the party are even worse as they side with the Democrats in wanting Donald Trump’s head on a platter.

In the latest episode of NOQ Report, I dove into three important reasons Trump must ignore calls to move on and instead use his post-impeachment time to finally get the word out about voter fraud. The first reason is very simple. Tens of millions of Americans simply do not know. They listened to mainstream media, Big Tech, Democrats, the Deep State, The Swamp in general and the Uniparty Establishment Democrats and Republicans in particular as this cabal pushed the narrative that voter fraud didn’t happen. It did. Most Trump-supporters know this, but only because they’re reading sites like this and others who are telling the truth.

The lie that voter fraud was tried in court has spread to the masses. It was never truly tried in court. It wasn’t reported on by most in the media. Those who did not actively seek the thousands of affidavits, dozens of videos, or dozens of statistical analyses that demonstrate widespread voter fraud likely believe it’s a conspiracy theory that has been debunked. Despite efforts by Mike Lindell, Patrick Byrne, and a handful of truly conservative media outlets, the message was not widely received. Only Donald Trump can get that message out properly now.

The second reason is less obvious. Ask a thousand Trump-supporters if there’s any chance of fixing the election results to properly reflect the will of the people and 997 will say no. Some lost hope in December. Others fell off after January 6th. The remnant that still held onto hope likely gave up on January 20. But there’s still an opportunity for Donald Trump and possibly others to expose voter fraud in a court of law and challenge the authority by which Joe Biden was named president. A Writ of Quo Warranto is the perfect vehicle for this. Most are not pushing it, but we continue to seek those who will take up the mantle, those who have standing to demonstrate grievance caused by voter fraud. If a Writ of Quo Warranto is filed and works its way up the judicial ladder, we truly do have an opportunity to have our day in court.

Last but not least, getting the truth out about voter fraud would help Donald Trump prepare for whatever he has planned in the future, whether that’s as a powerful activist or a future run for president. Whether he addresses the issue or not, it will be attached to everything he says and does. Media and his opposition will use terms like “baseless” and “debunked” to categorize his past claims of voter fraud. If he wants to stay in politics, it behooves him to explain to the American people why he believes so adamantly that the election was stolen. Whether they agree or not, presenting a mountain of evidence can demonstrate that his claims were not baseless and that they’ve never been debunked.

We have entered into the fading-memory phase of post-election politics. Even many in conservative media are starting to pretend like there was no voter fraud that took place. Some are acknowledging it was there but not widespread. Others admit it was widespread but add the asterisk that it wasn’t enough to sway the results of the election. It’s necessary for Donald Trump to show voter fraud happened, it was definitely widespread, and it almost certainly changes the results in at least six states, perhaps more.

The safe play for Donald Trump is to move on. Regroup. Accept defeat and try again. But the righteous move would be to stand tall and expose to the world what he knows about an election that was stolen from him and the American people.