The sheer dedication to fixing this nation and preventing a socialist takeover is worth hearing about from Clash Daily's Wes Walker. He's been fighting the good fight on the site since 2012 and doesn't intend to slow down any time soon. 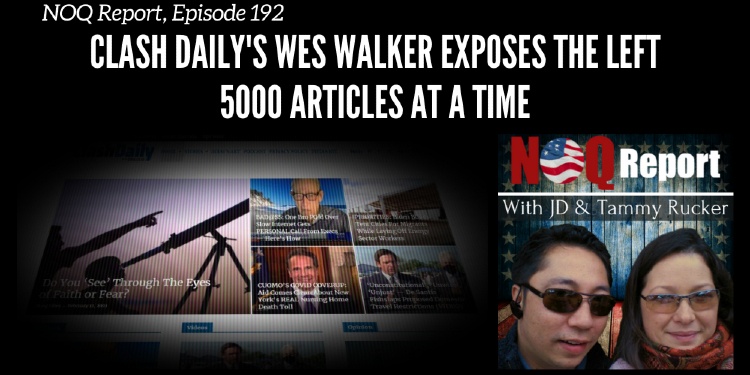 One thing the aftermath of the 2020 presidential election has taught conservatives is that we need to be more discerning about who we trust in rightwing media. Betrayals by Fox News, Washington Examiner, Daily Caller, and most major conservative news outlets have patriots scrambling to find better options. One such option is Clash Daily, a site that is growing in prominence by fighting the good fight.

On the latest episode of NOQ Report, I sat down with editor and writer Wes Walker. He spends his time daily writing up stories to expose the Neo-Marxists as well as to promote a freedom-loving mindset in America. Of immediate interest is, of course, the sham impeachment.

“We’re looking at two different tracks, two different arguments, two different juries, and depending on which one you’re describing we’ve got two different things going on,” Walker said. “On the very superficial and simple level we have an obvious dead end where there is no way on this side of hell that we will have the total votes needed to convict former President Donald J. Trump.”

It isn’t just about conservatism. Walker promotes freedoms from all angles, including this article on the church that is a must-read as it highlights a series from site owner Doug Giles on Warriors & Wildmen:

“It’s one thing to have that nicer-than-Christ-sweet-Jesus kind of sermon that, you know, marks time but doesn’t change lives or challenges people to go on to any significant greatness,” he said. “In harder times, those little happy-clappy messages don’t cut it and they don’t prepare believers to take the kind of stand that changes worlds and knocks down tyrannies.”

Another of his important articles featured on The Liberty Daily focuses on the fact that impeachment has been the plan from the start for Democrats. They didn’t just hope for it. They planned for it.

How BOTH Trump Impeachments Stem From ONE Strategy Predating His Inauguration

The biggest challenge conservatives face today is the leftist propaganda being amplified by Big Tech while patriotic messaging is suppressed. Truth is being subverted for the sake of maintaining a progressive narrative. It isn’t just about elections. It’s about Covid-19 tyranny, religious persecution, and the hypocrisy of failed leftist policies being propped up by the talking heads of American mainstream media. Clash Daily acts as a counterbalance to the lies.

Promoting truly conservative, patriotic media is a must for those who love this nation. We cannot rely on corporate media. We’re panned by Big Tech. Many in “rightwing media” are failing us. Clash Daily is one of the good guys.