Election reform is absolutely necessary if we're going to keep our constitutional republic intact. Former U.S. Senate candidate Lauren Witzke is pushing for reforms at the state and national level with Hold The Line PAC, a new organization that wants to prevent what happened in the 2020 election from ever happening again. 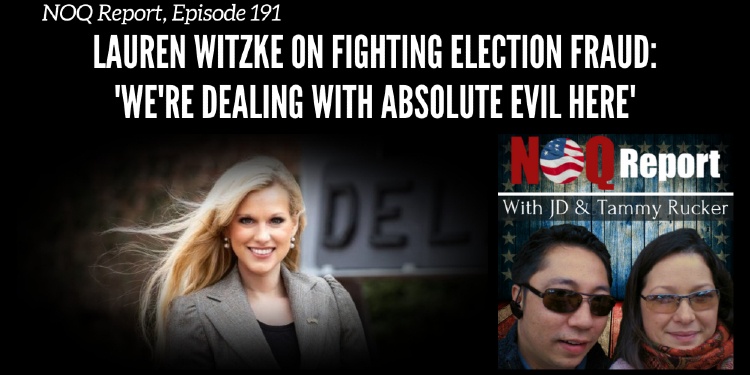 One can debate whether there was enough voter fraud to change the results of the 2020 election, but anyone who says there was not widespread voter fraud is either lying or ignorant. It happened, it was massive, and many on the left are even coming out to brag about it now that the coast is clear. The question now becomes, what do we do about it?

A handful of conservative publications are still fighting the good fight to inform tens of millions of unaware Americans that voter fraud did steal the 2020 election. But there’s another angle that must be addressed. After all, this was (hopefully) not the last election, so what do we do about preventing this from ever happening again? Hold The Line PAC, a new organization pushing for election reforms at the state and national level, is working to secure our future. I had the blessing and honor of interviewing their spokeswoman Lauren Witzke, a former U.S. Senate candidate in Delaware.

“Civilized societies don’t use vote-by-mail, they don’t use electronic ballot boxes, and they require voter ID, so that is what we’re going after,” she said.

There are certain common sense components of a free and secure election that have been lost in America. The infamous “hanging chads” of the 2020 election prompted the unwise decision to move away from paper ballots and focus on technological solutions. But as we’ve known for years, there are far too many vulnerabilities inherent to a digital voting apparatus. The 2020 election brought even more of these vulnerabilities to the forefront.

As Witzke noted, unsolicited mail-in-balloting is another area rife with voter fraud potential. The Covid-19 lockdowns were used as a smokescreen to change rules and laws—often going against several state constitutions—in order to justify creating an environment in which voter fraud could take place. This brings us back to the trillion dollar question. Was there enough voter fraud to change the results of the 2020 presidential election?

We wholeheartedly agree. One of the challenges we’re faced with is many in “conservative” media are too concerned about repercussions to even allow discussion on the topic. There’s a question their hosts are not supposed to ask. It’s a topic that guests on interviews are not supposed to bring up, as Witzke has learned first-hand.

Her Hold The Line PAC is fighting to get the truth out about what happened in 2020 and to make sure legislation is brought forth that protects the American people from going through this debacle again. We’re currently stuck with a Biden administration and a Democratic Party in control of the House and the Senate. The PAC is contending with Washington DC, but their primary focus is on building up grassroots action at the local level by addressing swing states that are most vulnerable to the machinations of those who would (and have) subverted our election process.

It comes down to transparency, something that was terribly lacking in the 2020 election. From pizza boxes blocking windows to late-night ballot drops to observers being removed from the areas they were supposed to observe, the 2020 election was a case-study on how not to have a free and fair election. Then, we have had to suffer through the insult of blocked audits and a Democratic narrative pretending that there’s nothing to see here.

“If Joe Biden won legitimately, they would have had no problem doing an audit,” Witzke said. “They would have no problem allowing the truth to come out, but they know the election was stolen.”

It was refreshing having a guest who was not afraid to speak the truth. Many on the right have been walking on egg shells and dancing around the topic of voter fraud because of fear that they will be canceled, not just by the “woke” crowd but also by “conservative” media. Witzke’s mission supersedes those concerns. The truth is what’s important.

“They fear the truth above all else,” she said. “We’re dealing with absolute evil here.”

If we do not act immediately and sustain grassroots efforts to reform our election system, we will not be able to keep our republic. Lauren Witzke and the Hold The Line PAC are fighting for our future. They’re fighting right now.