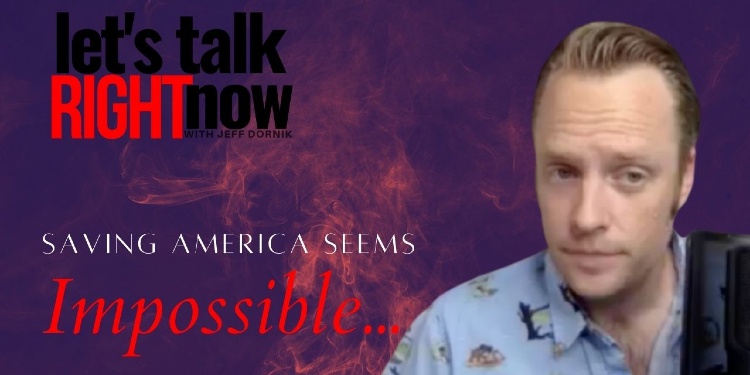 After the inauguration of Joe Biden as the Alleged President of the United States, many Conservatives who had faithfully had President Donald Trump’s back throughout the 2020 Election and the aftermath of exposing Election Fraud have become tired and weary. Think about it, we all know that the election was stolen, but we’ve been beat down time and time again from the Mainstream Media, the Democrat Party and even many within the leadership of the GOP. Because of the seemingly impossible situation that we find our country in, with very few options to actually save it, this episode of Let’s Talk Right Now takes a Biblical tone, taking a look at how God often times waits until things are impossible for us before working mightily… which brings Him all the glory!

One example of this is Elijah in 1 Kings 18, where we saw that he was literally the only prophet of God left in Israel, while the false idol Baal had 450 false prophets. Israel had turned their back on God. There was no saving Israel without a massive revival, and how was one single man going to accomplish this? God worked in a mighty way that day to show everyone that the prophets of Baal were corrupt frauds and liars.

That is what we are seeking today. Except that instead of only one single prophets left in our country, we have more than 75 million people that voted for Donald Trump. We have millions of true Christians that want to see God at work. However, maybe God is using this as a teaching moment for the American Christians to remind us to continue to have faith, even in the most difficult and impossible situations.

Yes, times seem virtually impossible right now. Joe Biden has already been inaugurated as the Alleged President of the United States of America. His flurry of executive orders are undoing all of the amazing work that President Trump had accomplished during his four years in office. The Democrats are getting away with the largest voter fraud scheme in the history of the United States. So how do we, as Christians and as Conservatives, respond? With faith in God.

No matter what, it is our calling to follow after Him. We continue exposing the truth. We continue to preach the Gospel. We continue to promote the American ideals that our Founding Fathers created our nation with. Remember, our Founders were in an impossible situation themselves. They went up against the greatest military superpower in the world because they valued individual rights, which included being able to worship God as they see fit. Because of their faith in God and obedience to His ways, He honored their faithfulness and allowed them to defeat the mighty British army. If God could work in those circumstances, He surely can today, as well.

Trader Joe’s Announces Customers No Longer Have to Wear Masks

WHAT IS GOING ON? Dominion Voting Says They Will NOT Release Info On Maricopa Voting Machines