When describing the cabal of left-wing activists and corporations working to affect the results of the election, TIME claims, "They were not rigging the election; they were fortifying it." In other words, the election interference that they're acknowledging took place was meant for our own good because if they didn't get involved, President Trump's victory would have been certain. 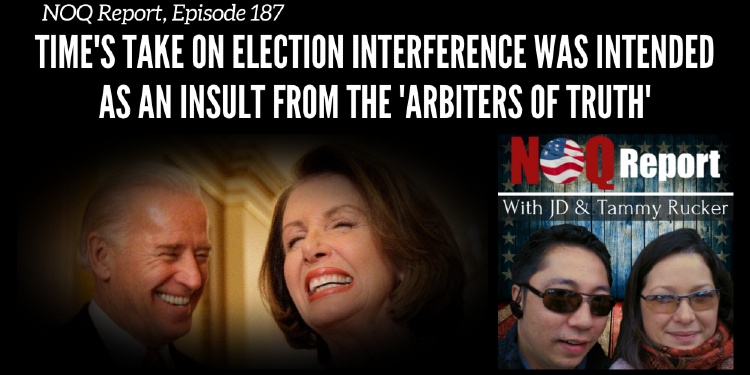 An article posted earlier today by TIME seemed to self-incriminate mainstream media, Big Tech, leftwing “activists,” and major corporations in a “cabal” hidden in the shadows that had been working for a year before the 2020 election to establish the results they wanted. They didn’t try to debunk claims of voter fraud but instead seemed to be proud of the part they played in “reinforcing” the election.

This was spin. The entire long article was a propaganda piece posted ahead of the upcoming Senate impeachment trial in an attempt to justify their actions. They cheated. They know it. They know many of us know it. Now they fear too many people will be made aware of it, so they’re scrambling to get the narrative straight. For background, it’s better to read the analysis of Stacey Lennox at PJ Media than the original source:

Then Time tells you how you are supposed to feel after reading the entire story. The bluntness of it, telling readers that they know how it sounds but they must interpret it differently, is gobsmacking arrogance:

That’s why the participants want the secret history of the 2020 election told, even though it sounds like a paranoid fever dream–a well-funded cabal of powerful people, ranging across industries and ideologies, working together behind the scenes to influence perceptions, change rules and laws, steer media coverage and control the flow of information. They were not rigging the election; they were fortifying it. And they believe the public needs to understand the system’s fragility in order to ensure that democracy in America endures.

What is described in the entire story has nothing to do with democracy or the consent of the governed. Instead, it represents a bargain between unions, corporations, activist groups, and the political elite. It is a precursor to the triumvirate of unions, big business, and the government becoming more evident every day. Put another way, the political elite, the very wealthy, the bureaucracy, and those willing to subsidize struck a bargain.

President Franklin D. Roosevelt was the first to attempt a formal version of this type of cooperation. Roosevelt established the National Recovery Administration (NRA) in 1933. Encoded into law, it implemented a series of regulations and codes that benefitted large corporations and labor unions. Companies that complied with codes were allowed to display a blue eagle emblem to confirm their compliance. In 1935 the Supreme Court ruled the NRA unconstitutional.

The left is so impressed with itself over their apparently successful theft of the election that they’re taking a moment to pat themselves on the back by showing their work. They’re mocking us, letting us know they can’t be touched. This is the beginning of a post-truth society in which their version of the truth must be the accepted version, even if it’s demonstrably false.

In this episode of NOQ Report, I got quite heated about the whole TIME self-expose and their attempt to justify domestic election interference, aka voter fraud. I also touched on the Navy’s “UFO Patents” and Mike Lindell’s “Absolute Proof.”

Falling on the Sword for Dr. Mehmet Oz