Jeff Crouere: Will the GOP survive? Should it?

Following President Trump's "loss" in the November elections, many Republican lawmakers have shown their true colors by abandoning him as quickly as possible. They've embraced the Establishment stance that satisfies the Biden administration and placates their donors. But they've left their base behind. What's next for them? Journalist Jeff Crouere joins JD to discuss. 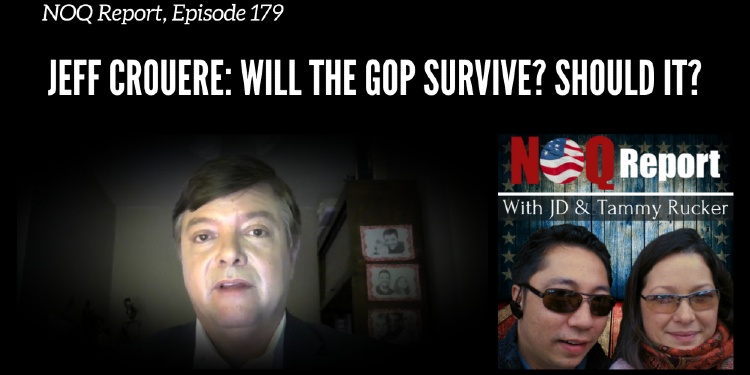 Our leaders in the Republican Party were, for the most part, supportive of President Trump and his agenda for the entirety of his term. At least that’s what we were led to believe. But now that he has been removed from office by voter fraud and efforts are being made to destroy his legacy, we’re seeing a shift among Republican lawmakers. Were they ever really on his side?

Some were. That much is clear. But many if not most were only pretending to support him to garner favor and his election blessings for themselves while secretly despising him. Senate Minority Leader Mitch McConnell is at the top of the list of people who pretended to be on the Trump Train, only to jump off and try to blow it up the moment he had won his own election.

Today on the NOQ Report, I was joined by Jeff Crouere. With 22-years of Republican activism and conservative journalism under his belt, Crouere has built the type of credentials the GOP wants in their corner. Is he still? He and many other long-time Republicans are questioning whether their attentiveness to the party has been fully betrayed as Republican leadership turns their back on the most effective president in many of our lifetimes.

Of particular concern to some Republicans is how rapidly many of our representatives embraced the Biden regime. Never have we seen Republican lawmakers so relieved that their own party’s presidential candidate lost. And while there are decent conservatives still on Capitol Hill, it appears that The Swamp and the Deep State still have better representation among Republican leaders than the GOP base itself.

In this fascinating interview, we also discussed the efficacy of a third party movement, one that may or may not be led by President Trump. He appears to be staying in the game in some form but asked today for his supporters to be patient. With a Senate impeachment trial around the corner and fallout from his loss still waiting for the dust to settle, we may not know the direction he wants his supporters to go for weeks, even months.

Like Democrats, the Republican Establishment is relying on propaganda and gaslighting to try to convince their base that they were right and Trump was wrong. With weak party leadership and a penchant for betrayal, the GOP may not be worth saving.

Blind injustice and the collusion delusion