How to resist the post-truth society that is engulfing us

The left has been planning for this day for the last six decades. The right has lived like the truth would always prevail. Now that we're seeing truth being decimated before our eyes, it's time to rethink our strategies and reinvent what it means to "resist." 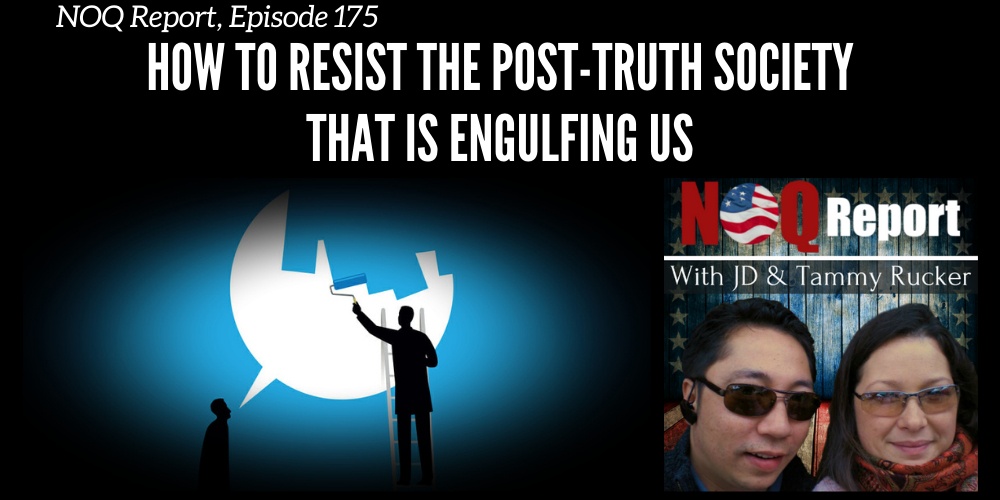 Believe it or not, there are bigger fish to fry than just those who perpetrated election fraud. As we prepare for what is supposed to be Joe Biden’s inauguration, it’s fresh on our minds that the left and other forces behind them were seemingly successful in pulling off the biggest con in American history. Getting our “revenge” is top of mind for many conservatives, but there are bigger issues that must be confronted immediately.

Up front, I’m still at 50/50 on the election going to Joe Biden. With two days before inauguration, many believe I’m delusional for having such high hopes that the election can be corrected, but I know what God was able to do in six days, so He can easily correct this if it’s His will. We don’t know what His will is, but there’ still plenty of time for Him to act in the form of a “MOAB” or “Mother Of All Bombshells” which I’ve been praying for regularly over the past month. It can manifest in multiple ways such as the so-called “sting” that many MAGA people have been claiming will happen at any moment. Then, there’s the “Italian connection” which we’ve documented here. If it happens, it’s probably going to be something that we do not anticipate. Keep praying.

It starts with mainstream media and Big Tech having an information stranglehold in America and around the globe. We are ill-prepared to combat this, though not for a lack of trying. Too many of us in conservative media relied on Google, Facebook, Twitter, and other Big Tech “platforms” to help us drive traffic. But they’re pulling the rugs out from under us now, long after we should have seen the writing on the wall.

To combat this, we need to popularize the truth-tellers. I proudly claim that NOQ Report is among them, but there are plenty of others. We must grow. The NOQ Report podcast must grow. Others who continue to fight the good fight must grow and take the mantle of “conservative media” away from the likes of Fox News, Daily Caller, and Washington Examiner.

Most people are not part of conservative media but have important roles to play nonetheless. There is sharing, of course, but we need to be very careful about what we share. Yesterday, my wife told me she wasn’t happy about a particular post because as fun and “click-batish” as it was, there were inaccuracies in the narrative we were trying to spread. We should have spent more time researching it before posting, and we encourage other conservatives to do more research before sharing whatever they find on the web. We must fight the post-truth society with the actual truth. We lose credibility when we push the big stories that turn out to be not true.

To keep the post-truth society going, the left will try to create indefinite Democrat rule. Some believe it’s already over, that they’re going to continue to commit voter fraud, add two or three more states to the mix, and allow illegal immigrants to vote. These three things will make it hard, perhaps even impossible to regain control at a national or even lower level, but we must try.

We have to start making aggressive election moves. That’s a broad statement that I’ll need to cover more in-depth in a future article and possible even a whole podcast, but we should be clear right now about what that does NOT mean. We are not going to encourage cheating. Just because the left is wont to cheat their way into office does not mean we combat that with cheating of our own.

It’s not just about removing Democrats from office, either. Feckless Republicans have to be a top priority. We need to get primary opponents ready and active now. And again, we must be aggressive about it. In the past, primary opponents have been viewed as harmful. The loosely accepted “political Hippocratic Oath” of “do no harm” is out the window. There is no meaningful difference between an Establishment Republican and an Establishment Democrat. We cannot fear the repercussions of a failed primary attempt or we’ll never have successful ones.

While all of this is happening, we also need to look to Big Tech from a consumer perspective and make changes. Stop using the companies that hate us. They have become the kingmakers and the fundraising arm of the Democratic Party with deep-rooted attachments to the Neo-Marxists. They’re beholden to the Chinese Communist Party, George Soros, or both.

Like many, I’ve stopped buying through Amazon. It’s not hard. Is it less convenient? Yes. Is it occasionally more expensive? Yes. Is it worth it to buy direct or through other services? Absolutely. That’s why you won’t find Freedom First Coffee on Amazon. Just buy straight from us and use “NOQ” as a promo code to get 10% off.

Alternatives to Google search are everywhere. I like DuckDuckGo. I’m doing more research on how to apply that mentality to eliminating Google across the board. I’m looking for an alternative to Android now, and no, Apple is no better.

Then, there’s Twitter and Facebook. I’m still on them. They’re different. They still hate us, but here’s the thing. They’re used as methods of communication and right now getting information out there supersedes my distaste for the companies behind the “platforms.” I won’t censor my speech there so I’ll probably get booted anyway, but I’m not going to leave until I’m banned.

The most important thing we can do is to build things. Build alternatives. Build venues for freedom-loving Americans regardless of their political ideology. It’s not about free speech, which is a constitutional right to protect us from government suppression. This is about freedom of thought, and that has been under attack for years. I’m currently talking to multiple investors about multiple projects. Some are very exciting. I encourage anyone with ideas or money to spare to contact me. Let’s start building.

Whether a miracle happens in the next couple of days or if Joe Biden is inaugurated, the need to fight the rise of America’s post-truth society must be at the forefront. If we lose this battle, we lose all battles going forward.