Even after Texas SCOTUS ruling, President Trump is still going to win

Many Trump supporters seem to be emotionally drained after a roller coaster week that ended with bad news from the Supreme Court. But the reality is there are plenty of ways to proceed and the Texas lawsuit was far from the best avenue. 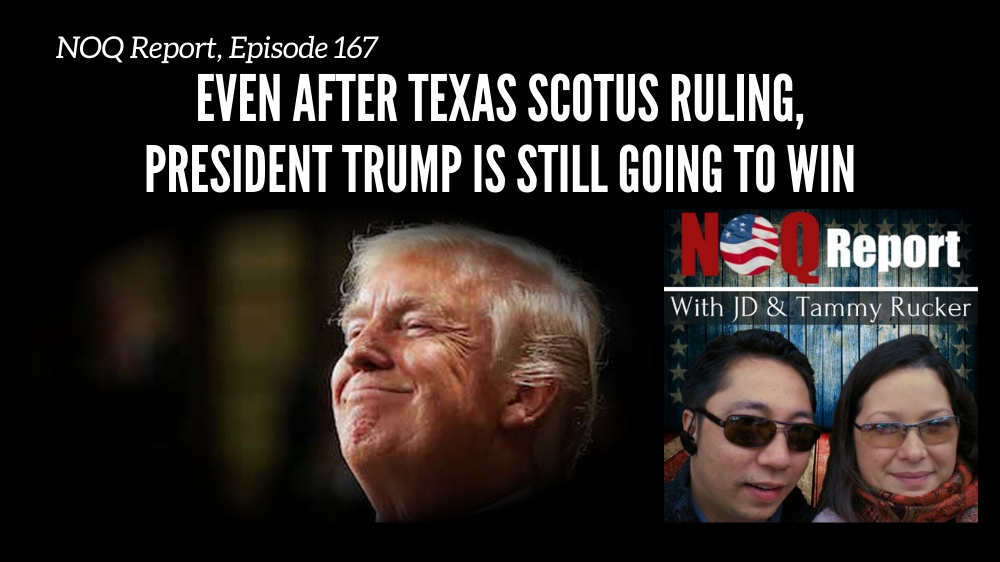 When I’m wrong, I say I’m wrong. Most of the time when I’m right, I don’t gloat. But there are times when it needs to be pointed out, not because I need an ego boost but because the results of being right need to be understood in context. The negative ruling by the Supreme Court is one such example because in the last episode of NOQ Report, I put the chances of it flipping any of the four states in the lawsuit at zero. But I’m still quite sure President Trump will win, just as I was confident before the ruling came down.

Anyone honest who looked at the Texas petition (and the Pennsylvania petition earlier in the week as well) should be able to agree the merits were strong. But this isn’t just about merits. There are two important factors that have nothing to do with merits: Motivations and standing. The Texas case was plagued with a motivation problem from the start because it went after four states for breaking their own election laws, states that President Trump unfortunately lost by a small margin. The problem with the case is that there were 27 other states with similarly broken election laws that were not included in the lawsuit either because the margins weren’t close or the President won them.

But the Supreme Court shot down the Texas case over the second issue: Standing. Texas had a hard time demonstrating it. Even with dozens of states jumping on board with various amici curiae, the case itself still went through Texas alone. It should have been 20+ states filing the lawsuit together, but time was too short for Texas Attorney General Ken Paxton to organize it. Thus, they missed the opportunity.

The Texas case wasn't our best shot, contrary to what so many have said. As I noted in the show last night, it had fatal flaws, and I didn't even mention standing.

But the truth is coming out. Better cases are coming up. I'm still at 90% sure President Trump wins, Lord willing.

And that’s okay. It’s not ideal; I was 50/50 on whether the case could prompt a short delay on selection of electors to allow other lawsuits and investigations to work their way up the ladder, but that didn’t happen. Now, we’re here with many Trump supporters losing hope. That’s understandable but unwarranted. Lest we forget, we have the most important earthly factor on our side: The truth. As long as this is still the United States of America, the truth has an opportunity to shine through in the end.

Will it? I believe so. There’s the Lin Wood lawsuit in Georgia that is now docketed with the Supreme Court. It’s not the most substantive lawsuit out there, but it has more direct evidence of voter fraud than the Texas lawsuit had. We also have the Team Trump lawsuit proceeding to the Wisconsin Supreme Court Saturday. That one is promising mostly because of the slight right-leaning makeup of the seven-Justice court. Sidney Powell is still fighting. Many other attorneys and organizations are making appeals through the courts and legislatures. There is still time and opportunity to bring this election to a righteous conclusion.

But I always go back to having the truth on our side. Those who say “show me the evidence” have either willfully ignored the mountains of evidence in President Trump’s favor or they’re lying when they claim there is none. A nation that is collectively willing to allow its elections to be subverted is not a strong nation, and I still believe in the exceptionalism of America. Therefore, I have hope that this works itself out through the courts, state legislatures, electors, or Capitol Hill.

The bigger reason that I’m confident is that I have faith. I know that if God’s will is for President Trump to win, then it will happen. And if that’s not the case, then it’s still God’s will for whatever happens in the stead of a second Trump term. As believers, we should know better than to impose our own desires on things that are way above our pay grade. That’s not to say we stop fighting. But we do so knowing that the outcome is the right one from a Biblical perspective even if it makes no sense to us today.

Many may be losing hope in the courts, but they haven’t seen the best cases yet. State legislatures can still act. Electors can still act. Capitol Hill may be forced to act. But in the end, I’m still confident President Trump is in the Oval Office until January, 2025.