How patriots can help the most to #StopTheSteal

We're in the middle of an attempted coup. Many in government are pretending like it's not happening because they're either complacent or complicit. It's up to the attorneys and state legislators, but we can help as well. Here's how. 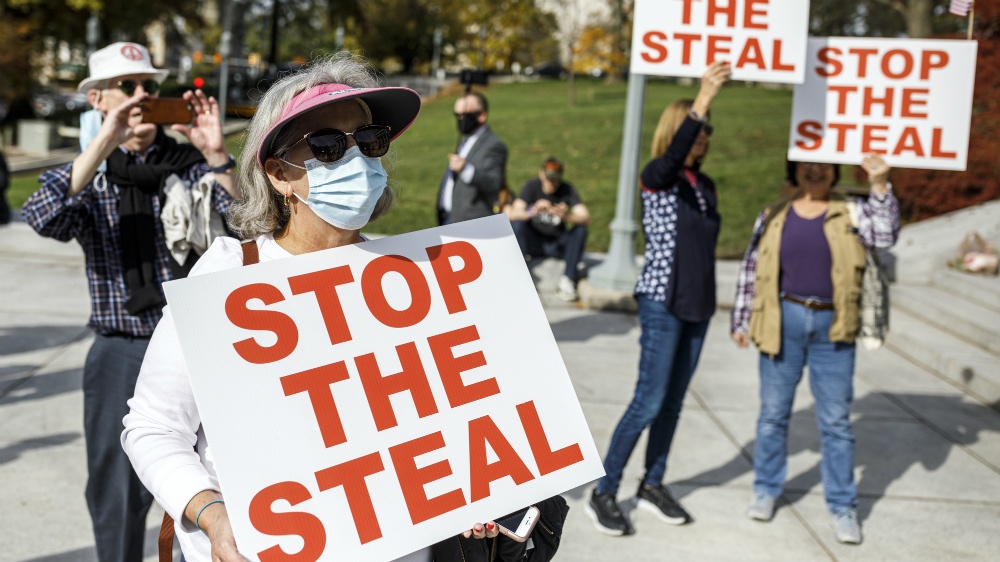 President Trump won the 2020 election in a landslide. It was so huge, the massive voter fraud perpetrated by Democrats, mainstream media, and Big Tech was simply not enough to overcome the President’s incredible reelection run so they had to step up their fraudulent efforts tremendously on election night and beyond. Thankfully, they had to get sloppy to pull it off which means there is an abundance of evidence left behind to prove the coup was happening.

But things aren’t completely cheery. Not yet. There’s still plenty of work to be done by the President’s team of attorneys, independent attorneys like Sidney Powell and Lin Wood, and state legislatures in swing states. What makes it worse is that mainstream media and Big Tech are doing their best to perpetuate the “president-elect Biden” narrative in hopes of creating a self-fulfilling prophecy. Meanwhile, Democrats and complicit Republicans are calling on the President to concede.

All of this can make patriots across the country feel like we’re not able to participate. It was easy, even fun to get involved in rallies, spreading the word on social media, knocking on doors, working call banks, and any of the many pre-election activities we had at our disposal. But for this part of the process, we have to sit back and wait. Or do we?

We may not be going to the Supreme Court to defend the President’s victory, nor are most of us sitting in state capitol buildings pushing forth legislation to set the election straight, but there are still two very important fronts on which we need to hold the line. On these fronts, we have two ways to participate. The most important action, in my humble opinion, is to pray often and earnestly. America needs the protection of our Father and the blessings we’ve enjoyed for centuries to stay upon us.

The second most important action is one I described today in the latest episode of the NOQ Report. We are in the middle of an information war and the odds are stacked heavily against us. As mentioned before, both Big Tech and mainstream media are actively and aggressively working against us and the President. This is why it’s imperative that we fight harder than ever before to get the truth out there. It also means making a few changes in the way many of us have gathered our information.

It’s imperative that we continue to fight against the odds because we learned one important lesson from the Hunter Biden scandal. Mainstream media and Big Tech covered it up and as a result, the people didn’t know about it. That may be a tough pill to swallow as our readers and listeners are all well aware of the Biden Crime Family’s actions. Apparently, millions of Americans were not aware as a whopping 17% of Biden voters claimed they would not have voted for him if they knew about the scandal.

That tells us we MUST NOT ASSUME everyone knows about the rampant voter fraud that took place to steal this election. In fact, we must move forward assuming nobody we talk to, engage with on social media, or comment towards in other venues has any idea that a coup attempt is in progress. We must be ready with the evidence that’s compelling and we must be prepared to answer questions.

It’s not just about talking in our echo chambers. We need to spread the word where leftists are more likely to see it, such as in social media replies on Facebook, Twitter, and YouTube. Don’t just reply to President Trump or Rudy Giuliani. Go into enemy territory. Post replies to Joe Biden, Chuck Schumer, and Alyssa Milano. Reply to mainstream media posts, especially on stories that have to do with the election. Are you going to sway Alyssa Milano? No. But you may be able to inform some of her followers to the grand theft election that is in progress.

State legislators are going to be pressured to accept the fraudulent election results. Attorneys will be threatened. They already are. This is one of the reasons we need to fight this information war. The more we can inform our fellow Americans, the less likely they’ll be to ignorant act as if the election is being stolen for President Trump.

We also need to do this because there is a bigger battle coming if President Trump emerges victorious. We know the radical leftists will take to the streets and try to burn this nation down. But they will be joined by moderates who also feel like the election was stolen from them. We may not persuade Antifa or Black Lives Matter members to not burn down the local coffee shop, but we can prevent a clueless moderate who’s only turned into CNN that President Trump’s victory isn’t theft. It’s stopping an attempted theft.

One of the most important changes we need to make going forward is how and where we get our news. We are all well aware that Drudge Report and Fox News turned to the dark side long ago, but did you know Washington Examiner called on President Trump to concede? Did you know Daily Caller has been “fact-checking” and “debunking” election fraud claims? There are several conservative outlets that have turned. There are others who will not report on any fraud claims they feel are too fringe.

The best advice I can give anyone interested in hearing the truth (other than to read NOQ Report daily) is to use one of the conservative news aggregators. Here are the best ones I’ve found in no particular order:

The most common question I get when talking about fighting this coup is, “What can we do to help?” This battle is being fought by attorneys and legislators, but ALL patriots can do our part of keep President Trump in the Oval Office.