The standard response from mainstream media to yesterday's bombshell is that Sidney Powell was booted from the Trump Team for spreading Dominion "conspiracy theories." That's not true. 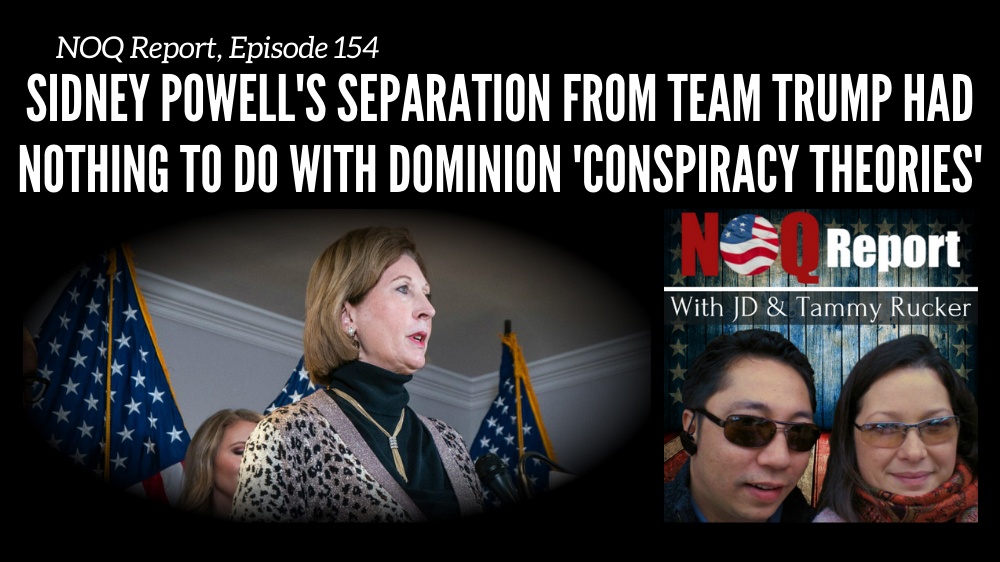 When news that Sidney Powell had been removed from the Trump campaign’s team of attorneys, theories started running rampant as to why it happened. After all, she spoke at the press conference the week before standing side by side with Rudy Giuliani and Jenna Ellis. President Trump has Tweeted she was part of the team. What happened?

Most assumed that since she has been talking about Dominion Voting Systems so much the last few days, that she was being booted over a “conspiracy theory” that isn’t panning out. Except… it is. Not only did Giuliani bring up Dominion during the press conference and again during his Wednesday podcast, but President Trump had Tweeted about Dominion the day before.

Another theory is that since Powell started going after Georgia Republicans, including Governor Brian Kemp, the Trump team had to distance themselves so they weren’t accused of going after their own team. This is also easily debunked as other members of the Trump team and the President himself have been critical of Kemp’s handling of the Georgia election and recount efforts.

Some Trump supporters have suggested this was a strategic move to, in essence, divide and conquer. There would be no valid reason to separate her from the team even if she was acting separately because she could lose standing that she would have had by filing suit as the President’s attorney.

No, the reason is much less dramatic than any of these theories. As do many things in America, it comes down to money. Powell was not being paid and likely wasn’t being reimbursed for her expenditures that were not directly related to what Giuliani and the official Trump team were doing. Perhaps yesterday morning she came and asked to be officially hired and was rejected. More likely, she came and said she needed to start raising funds and they told her she couldn’t work with the team directly and run her own fundraiser without it being reported as GOP money.

Either way, she wasn’t going to get paid or reimbursed enough, so they decided to go their separate ways. Here’s her reply to our request for comment:

I agree with the campaign’s statement that I am not part of the campaign’s legal team. I never signed a retainer agreement or sent the President or the campaign a bill for my expenses or fees.  My intent has always been to expose all the fraud I could find and let the chips fall where they may–whether it be upon Republicans or Democrats.

The evidence I’m compiling is overwhelming that this software tool was used to shift millions of votes from President Trump and other Republican candidates to Biden and other Democrat candidates.  We are proceeding to prepare our lawsuit and plan to file it this week.  It will be epic.

We will not allow this great Republic to be stolen by communists from without and within or our votes altered or manipulated by foreign actors in HongKong, Iran, Venezuela, or Serbia, for example, who have neither regard for human life nor the people who are the engine of this exceptional country.  #WeThePeople elected Donald Trump and other Republican candidates to restore the vision of America as a place of life, liberty and the pursuit of happiness.

You may assist this effort by making a non tax-deductible contribution to www.DefendingTheRepublic.org.  #KrakenOnSteroids”

I talked about this in much more depth on the latest episode of NOQ Report.

What does this change? Nothing. It’s fodder for mainstream media, Democrats, RINOs, and even skeptical conservatives to say, “See, Tucker was right!” In reality, she moves forward just as she would, only with funding heading her way.

America is being betrayed on two fronts