The race is over... at least that's what the Democrats, mainstream media, Big Tech, and the other forces of evil want us to believe. 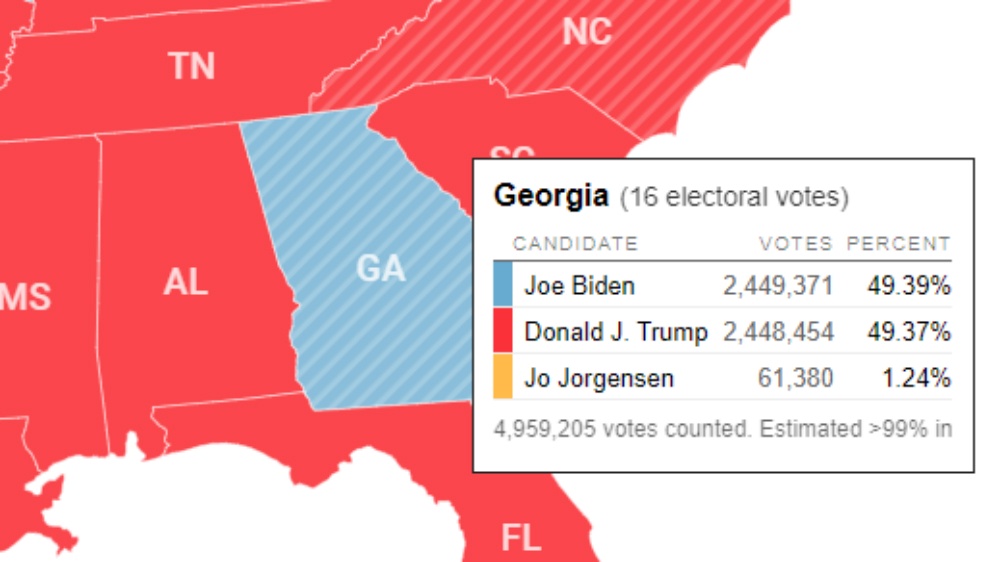 As many have been saying for three days, the fix is in. Georgia has just “flipped” with Joe Biden taking a narrow lead against President Trump. And considering that the vast majority of “late” counted votes favor Biden, it’s unlikely the President will make up the gap.

But don’t despair. An army of attorneys are working feverishly to expose and reverse the massive voter fraud that has been happening in states across the country, including Georgia. As lawsuits work their way up the ladder to eventually land in the Supreme Court, many conservatives have been predicting this since it became clear the race would not be decided on election day. We watched as Biden votes miraculously started popping up. We called attention to “THE HAMMER” and “SCORECARD” and thousands of patriots have been sharing these reports.

As mainstream media and Big Tech prepare to call the race for Biden, we must keep promoting reports that detail all of the voter fraud that is happening. They will sneer at us. Many of us will get suspended or even banned on our social media accounts. But we need to let the system work itself out. That doesn’t mean we sit back and do nothing.

At this early stage (yes, it’s still early) in the legal fight, it’s imperative that patriots keep the truth on our side. Now is not the time to be threatening civil war or to storm anybody’s castle. We know there is massive voter fraud in play and we must allow the President’s lawyers to do their thing. In the meantime, we need to continue to spread the word that this is not over. The last thing we need (other than a premature civil war) is for people to start accepting a Trump loss. I talked about this more in the latest episode of Conservative News Briefs.

Be prepared. They will soon call it for Biden and quash any notions to the contrary. But we must keep spreading the truth. This election is being stolen, and while the President works to fix it, we must keep our hopes and prayers up.

Good news: Trump will win in the end. Bad news: A fractured nation is certain.