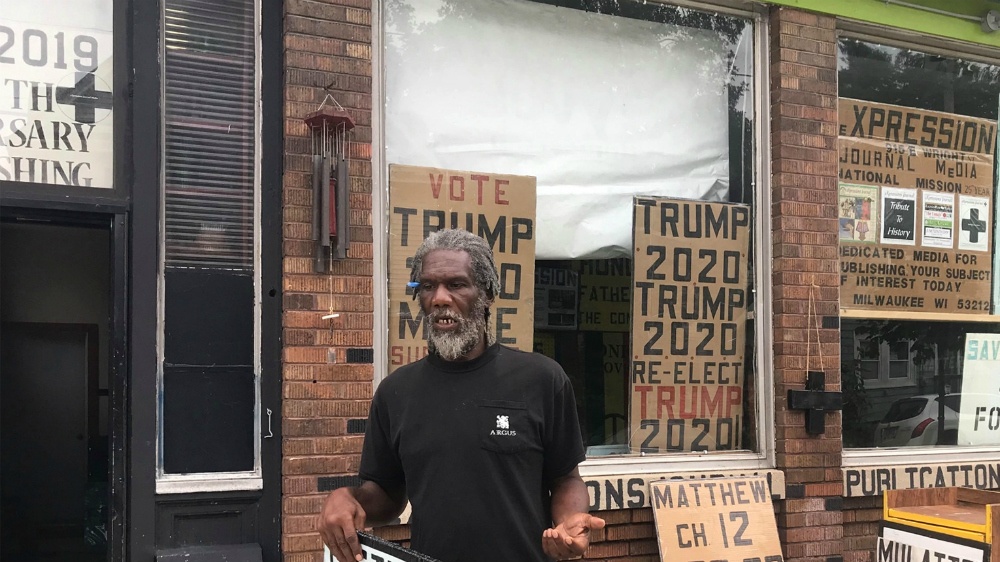 The murder of a Black man with a high-profile and strong political beliefs would normally be front-page news on most mainstream media sites. In these politically charged times with “Black Lives Matter” sucking most of the air out of newsrooms across America, the “execution-style” murder of a prominent Black activist should demand prolific coverage. But Bernell Trammell’s murder has not even garnered a mention on CNN, MSNBC, Washington Post, or NY Times. Why? Because he was a Trump supporter and is therefore anathema.

Powerful images of Trammell holding handmade signs expressing his support for the President are making their rounds on social media, but not among those who claim Black lives matter. Leftist accounts are conspicuously avoiding discussions of this particular Black life just like they do weekend spikes in murders of Black people in Chicago, Baltimore, and New Orleans. They have a narrative to sell and the propaganda machines in mainstream media are their top-selling affiliates.

The last media outlet to talk to Trammell on the morning of his death was The God Degree. Their subsequent write-up wondering who killed the activist is worth a read.

Yesterday evening on my way to go pick up some food I ran into the OG Rastaman Bernell. Most people around my way know who I am referring to because he was always outside, no matter the weather holding a sign of some sorts.

On winter days you might see him holding a sign with Bible scripture, seemingly minding his own business. Not being overall arrogant about his position. Just publicly voicing his opinion. Although his approach was a bit more radical or more eccentric in ways. He was just doing him.

Lately he had been holding signs for political campaigns. Earlier in the year you would see him outside with a Vote Lena Taylor sign during Senator Taylor’s Mayoral runs all over the city. The man got around. Earlier today he had mentioned to me “you wouldn’t guess the amount of hate I received from Black people.” In response to going out in the streets with a sign in show of support for Senator Lena Taylor’s Mayoral run. I wondered why, but truly I didn’t have time to ponder the thought as I was in a rush and wanted to get some words about his latest controversial political stance. The juice.

Just days before I had seen a Facebook post with the caption “hero” of an image with the Ras holding his latest political sign in support of Donald Trump. Along with the Ras and his unpopular sign there was a guy next to him with a sign saying “sike!” Sike, being a term used in our community like white folks say “not!”. You get it?

We searched the four big progressive mainstream media sites for all known spellings of the Black activist’s name. Nothing. Not a mention. It’s as if his political beliefs made him invisible to them. Perhaps it’s more accurate to say his support for the President made him too contradictory to the racist narrative they are trying to sell, the narrative that essentially claims if an African-American supports President Trump, then “you ain’t Black.”

Mainstream media is helping to usher in the post-truth society radical progressives have been envisioning for decades. In the society they hope to achieve, violent rioters in Portland or Seattle are called “peaceful protesters.” Men who claim to be women cannot be called men anymore. The President who has done more than anyone since Abraham Lincoln for the advancement of minorities in this nation is called “racist.” People like Bernell Tremmall are obstacles preventing them from achieving their societal-transformation goals.

He may be invisible to the left, but there are some on social media who are calling for Bernell Trammell to be remembered. I called for it in the latest episode of the Rucker Report as well.

Do you know who a true “peaceful protester” was? Bernell Trammell was an activist for President Trump and his faith, and he did so peacefully. But he doesn’t match the profile for Black Lives Matter to care. Say his name.