He's trying to fall on his sword, but what he's doing to everyone else is very bad. Be careful what you wear on a private fishing trip, folks. 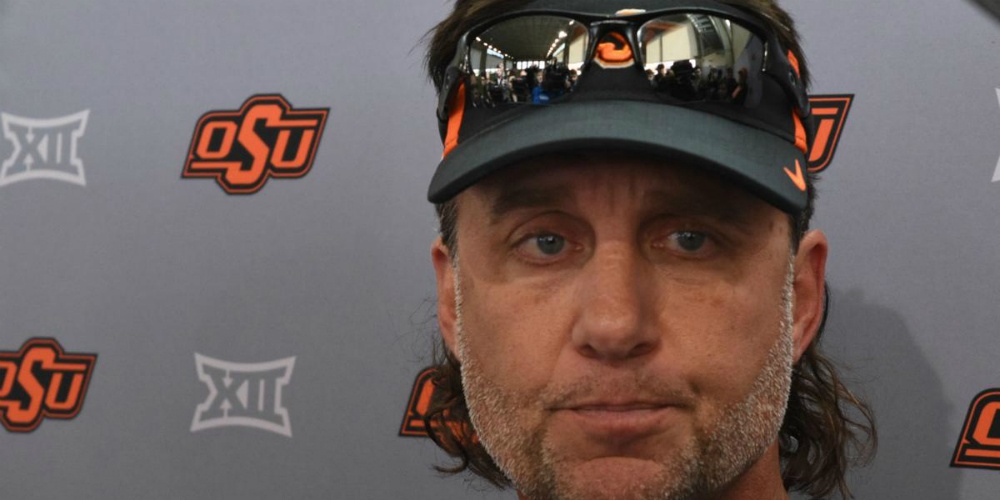 Oklahoma State University head coach Mike Gundy is widely considered to be one of the best in college football. He’s a strong recruiter and excellent playcaller who has taken a small school in a small town and turned it into a perennial bowl contender. But he was called out by his star player in the offseason for something ridiculous. Instead of taking a stand against idiocy, he embraced it.

Heisman candidate Chuba Hubbard, the team’s amazing running back, called him out for wearing a T-shirt on a fishing trip that had the One America News logo on it. The “OAN” letters on his shirt are commonly seen on patriotic Americans’ clothing, especially since President Trump has mentioned them multiple times on Twitter and during press conferences. This didn’t sit well with Hubbard, who Tweeted, “I will not stand for this.”

I will not stand for this.. This is completely insensitive to everything going on in society, and it’s unacceptable. I will not be doing anything with Oklahoma State until things CHANGE. https://t.co/psxPn4Khoq

Change is coming I promise you that. pic.twitter.com/wTGHtByh3N

Instead of stating the obvious, that it’s just a darn T-shirt that is not associated with anything racist or offensive, Gundy played Hubbard’s racial justice game. He said he needed to make changes to the entire program based on a T-shirt in a fishing trip picture. Gundy has always been known as a “player’s coach,” but this is going way too far.

To make matters worse, the school announced harsh punishments for his T-shirt. Here’s the kicker: The punishments were self-recommended. He volunteered for the sake of the team to take a $1 million dollar pay cut and to lose a year on his contract, along with other penalties. I detailed why this is very, very bad in the latest episode of the NOQ Report Podcast, but here’s the gist…

First and foremost, enough is never enough. Black Lives Matter and similar activists have demonstrated that no matter what a high-profile person or company does, they’ll continue to vilify them. Second, surrendering on this issue may seem like a noble move for the sake of the team, but it sets another precedent by which these unhinged activists can set the rules of their sordid game. Today, it’s an OAN logo on a T-Shirt. Yesterday, it was a MAGA hat. Tomorrow, it’s a message of “Jesus Saves” on a backpack. The madness will never end.

Mike Gundy has done a great disservice to the nation. It may not seem like a big deal (though $1 million dollars actually is a big deal to most), but when the Cultural Marxists get an inch, they try to take the whole field.