It's easy for the left to denounce the actions of these homeowners when they're busy telling the story from an agenda-driven perspective. 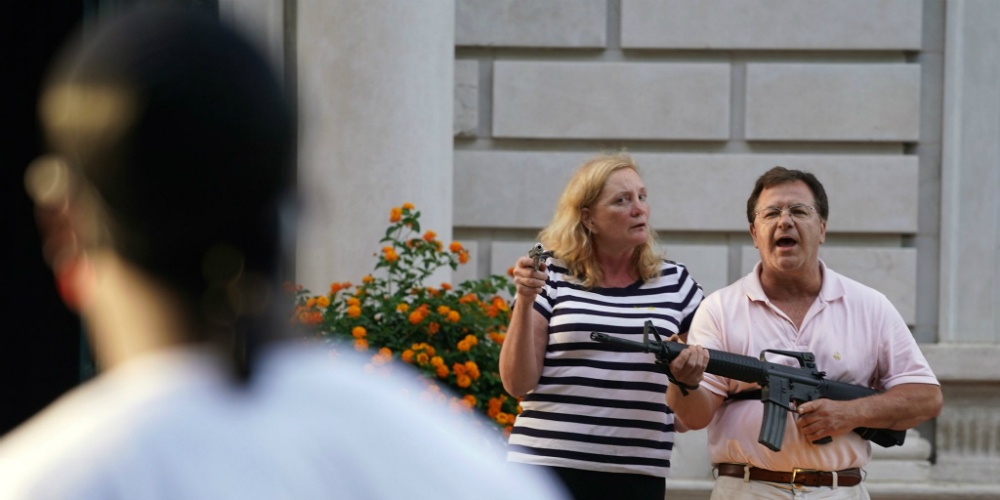 Mainstream media lies. Leftist social media lies. You know this if you’re reading this site or listening to this Non-Compliant America podcast. But it’s a message that needs to be heard by those who are not convinced that mainstream media and their leftist puppetmasters intend to mislead them at every opportunity.

Case-in-point: The St. Louis couple who went on their front lawn with firearms prepared to defend their property from protesters passing through their gated community. If you see the story on mainstream media, there are selective cuts of the incident displayed, cuts that deliver poor optics for the couple. But if you watch the whole video or learn the truth that their private property had already been invaded once the protesters breached the gates, the narrative shifts. Sadly, it’s a narrative that is muted on both mainstream and social media. Some have spoken out about it on Twitter.

In this livestream footage you can clearly see the STL black lives matter mob entered through the gate to a private community. This was not a public sidewalk. https://t.co/NeKHgTBWEu pic.twitter.com/UdYq3pGtlb

Leftists on Twitter are offended that this home owner stepped outside with a gun to prevent Black Lives Matter protestors from storming his home in St Louis. Good for him. pic.twitter.com/qCszCoTmdI

How to defend yourself against fascists 101

They threaten to take her gun and call her a bitch. She’s been watching these "peaceful protests" end in absolute violence all over the country for weeks. She feels threatened at HER home. She’s 1000000% within her rights. https://t.co/XOvnD1JcBn

If you're mad about a couple defending their home with guns and not "protesters" trespassing on private property, you're doing this all wrong.

The perpetually triggered left is focused on the huge home of the AR-15 toting couple in St. Louis defending their private property.

Yes, the house was huge, but here's the thing. I don't care if it's a castle or a trailer. Don't invade someone's private property. Period.

Lie #2: The homeowners were unprovoked

This lie requires selective editing of the videos. Mainstream and progressive social media won’t show the part of the video where the “peaceful protesters” breach a clearly marked gate to intentionally enter private property. At that moment, the homeowners in this entire area have been provoked. Coming out with firearms to prevent a worse breach of property and for justifiable concerns over safety is fully warranted and completely legal.

Lie #3: Escalation was initiated by the homeowners

This false narrative clearly ties in with the second one. If we assume that the mob had the right to be on private property protesting, then it’s easy to believe the homeowners were escalating. But if we were to look at the truth, that this was private property and the homeowners were making their intentions known that they would defend their home, then there is no unnecessary escalation. These were the actions of people prepared to defend life and property and their action to come to their front lawn with weapons was a courtesy to those who may have tried to do them harm.

We know cognitive dissonance has taken over much of progressive America’s mindset when defense of personal property is bad but destruction of property is heralded as a justifiable. America’s soul is being challenged. We must prepare.

These are dangerous times. The left wants to force you to be silent. That is why you need to speak up.

ANOTHER shooting at The CHOP in Seattle, one fatality reported