Black Lives Matter was there rioting and starting other fires, but an alleged member of Antifa was the person who almost certainly lit the big fire. 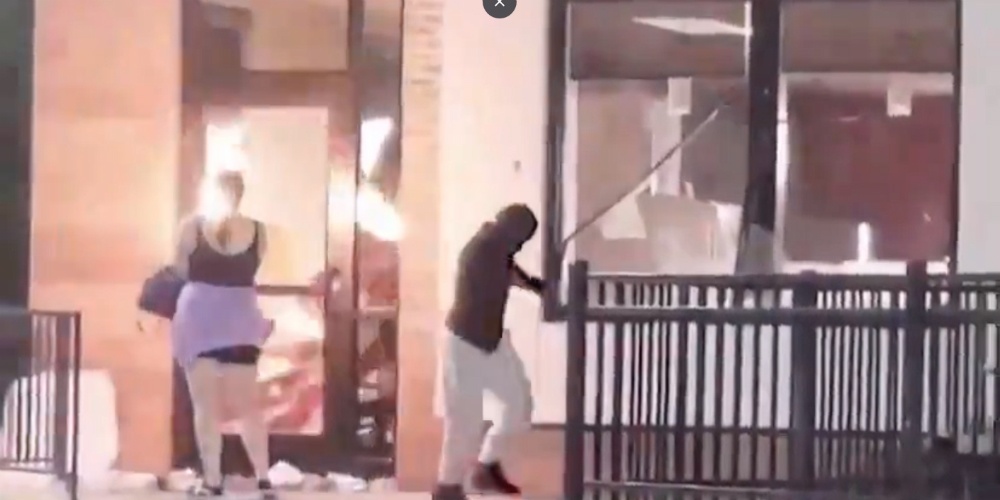 The death of Rayshard Brooks, a Black man in Atlanta who was killed by police officer Garret Rolfe, has sparked another round of protests and riots. This time, the carnage wasn’t as bad as previous riots but the Wendy’s restaurant where the incident took place was burned to the ground. The culprit appears to be “white girl in pink,” an alleged member of Antifa.

Officer David Bronsan responded to a call on Friday night that a man had fallen asleep while parked in the drive-thru. His backup, Rolfe, arrived and they performed sobriety tests. When they determined that Brooks was too drunk to drive, they attempted to arrest him but he resisted. During the ensuing melee, Brooks took Bronsan’s taser and ran off. Rolfe tased Brooks but wasn’t able to stop him. After Brooks fired Bronsan’s taser at Rolfe, the officer fired three shots, hitting Brooks in the back and buttocks. Brooks died.

Atlanta Mayor Keisha Lance Bottoms, anticipating riots, tried to get ahead of them by having police chief Erika Shields resign. Bottoms also called for the two officers involved in the shooting to be fired. Rolfe, who fired the shots that killed Brooks, was terminated while Bronsan was placed on administrative leave.

In this episode of the NOQ Report Podcast, I discussed the situation and made a point to highlight that the person who likely started the fire at Wendy’s was a Caucasian girl who, according to sources, may be involved with domestic terrorist group Antifa. Meanwhile, rioters set other fires and attacked a CNN television crew, destroying their camera.

I know some people can’t wait to blame Black Thugs for burning down the Wendy’s in Atlanta where #RayshardBrooks was killed for resisting arrest. However, this agent provocateur was Pink… #Atlanta pic.twitter.com/oMTScxjx6s

I have a feeling CNN didn't think this was a "peaceful protest" – they went down like a sack of hammers https://t.co/Mh2Amh6edA

Taser is a non lethal weapon. Rayshard was running away. Killing him was unjustified and an excessive use of force. That’s why the cop has already been fired, and the police chief resigned.

Whether or not the officers involved or their superiors should have lost their jobs could be debated, but it’s clear that Mayor Bottoms has no solution for her city. If anyone needs to go, it’s her.

The marginal drift of the Democratic Party

How is the left going to enforce a second COVID lockdown if they defund the police?