Seattle's "Capitol Hill Autonomous Zone" is likely going to spread, but that's not even the biggest concern for cities run by leftists. 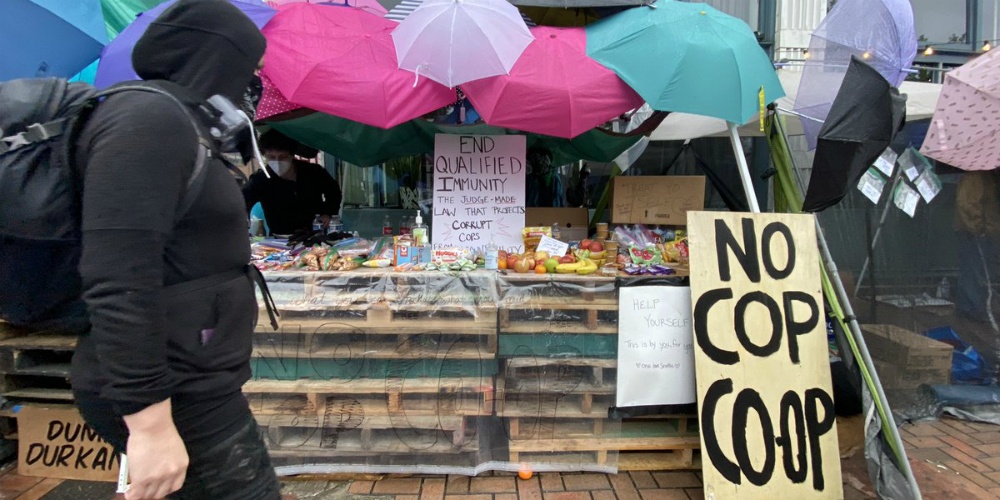 If you live in a city run by Democrats, you have a few choices. You could leave. That’s probably the best overall option. You could stay and try to ride the various storms popping up. Between lockdowns from coronavirus fears that already seem to be ramping back up to protests and riots following George Floyd’s murder, this may be a difficult choice to justify. Then again, if you’re content with communal living in tents with like-minded leftists, there may be a spot for you coming right around the corner.

In Seattle, that spot has already been established. It’s the “Capitol Hill Autonomous Zone” (CHAZ) in the heart of the city. Despite there being a police precinct there, you won’t find police as they’re no longer allowed. Was this a government decree? No. It was a capitulation to Antifa and Black Lives Matter protesters who have not shown signs of letting up for over a week. Now, the city has decided to essentially abandon a six-block area for the protesters to occupy.

There are four reasons Seattle and other leftist cities should be very concerned about this development. Actually, there are likely many reasons to be concerned, but we focused on these four to try to fit it into a 30-minute episode of the NOQ Report Podcast.

Before we get to the reasons to be concerned, there’s an important thing to note about today’s times. Is this likely to fail? Yes. But as we’ve learned in recent months, we cannot use logic or odds to determine which possibilities require preparation on our part. If you would have asked me a month ago about the chances that a major U.S. city council would vote to eliminate their police department, I would have put the odds around nil. Nevertheless, Minneapolis happened. If there’s a chance, even a slight one, that Seattle’s “CHAZ” experiment might be successful, we need to treat it as a certainty and hope for better outcomes. Now, let’s get to the reasons for concern…

Encouraging anarchy to spread based upon “success”

If this works, and there doesn’t seem to be a reason to think it won’t, then other leftist cities will follow suit. That’s how they work. Most Democratic politicians, particularly the most radically progressive, engage in games of one-upmanship whenever one of their peers seems to be more woke. Leaving a large chunk of the city to be taken over by protesters is about as woke as it gets, so unless there’s rampant crime, rioting, or other negative events that the press sees, we can expect San Francisco and other leftist towns to copy or advance what Seattle is currently trying.

An entire precinct of police officers were forced to abandon their post. That precinct building is now under the control of the protesters. This, on top of all of the other negative things happening to police officers today will only serve to reduce morale even further. Many of the people they have sworn to protect have turned against them. Press, mayors, and legislators have vilified them. It’s a difficult time to be a cop, and this situation won’t make things better.

The romantic but short-lived appeal of communal life

As hard as it is for most hard-working patriotic Americans to grasp, there are many people in this nation who would rather live in tents eating free food and watching movies on a big screen in the middle of the street. It’s actually appealing to some, and those who enjoy such things in the name of a “cause” will flock to areas where it’s happening. Some say that they’ll eventually run out of resources, but let’s be honest. Someone with deep pockets has been funding all of Antifa’s and Black Lives Matter’s antics from the beginning. Unless the National Guard is called in, these people aren’t going anywhere despite the fact that the appeal will be short-lived for most. Remember how long Occupy Wall Street lasted.

Peaceful for now, but…

When thousands of young, misguided Americans put themselves into situations that can turn volatile, eventually they will. Because this sudden movement of occupation is likely going to be allowed to continue indefinitely, at some point it’s going to turn violent. Perhaps that means looting. Perhaps it means rampant crime within the commune area. Maybe somebody just gets bored with inaction and decides to torch the precinct. Whatever it is, we know that eventually it will be something bad. The nature of this situation can only stay peaceful for a while.

Mainstream media is ignoring CHAZ. Why? Because Seattle’s “Capitol Hill Autonomous Zone” is a dangerous situation that’s going to spread. It’s important for patriots to treat this seriously before it gets out of hand, just like everything else 2020 has thrown at us.