These riots eliminate any doubt the radical left hates America

They aren't looking for reforms. They literally want to burn it all down and rebuild it as a Marxist dystopia. 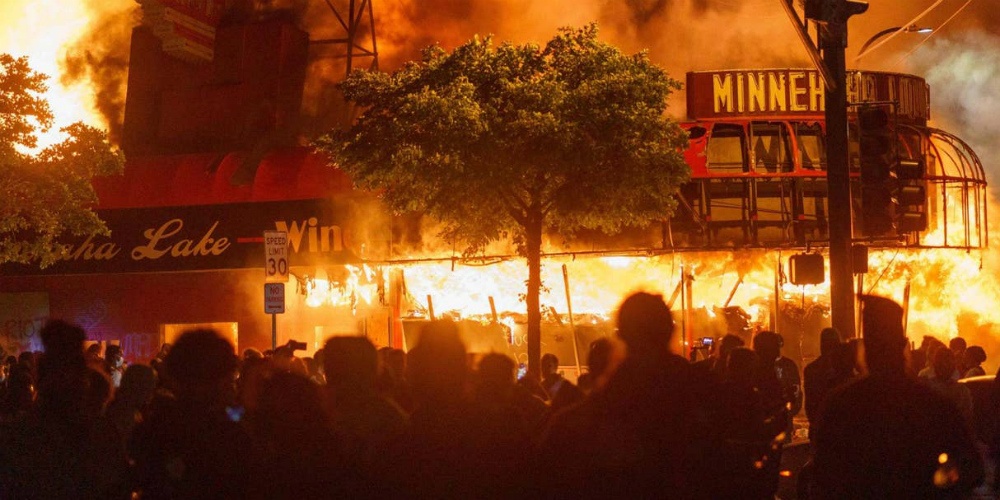 There are currently at least four groups at work with the rioting happening in America today. The first and most obvious is Black Lives Matter. They’re the tip of the angry spear, so to speak. They and their supporters make up the bulk of the rioters looting businesses and attacking anyone who is either not aligned with their goals or simply in the wrong place at the wrong time. It is shameful for them to be so easily enticed by the “free stuff” that comes with looting, completely tarnishing any peaceful protests that may have preceded the anarchy.

Antifa is clearly present and it seems as if they’re the ringleaders on the ground. Multiple videos have emerged showing people appearing to be with Antifa directing the rioters to various locations. Piles of bricks conveniently left on street corners have Antifa’s fingerprints all over them. They’re often the ones who are breaking the windows first, launching the free-for-alls of looting and destruction in retail stores across American cities.

Chinese propaganda is working on mainstream media as they try to maintain the narrative that these are “mostly peaceful protesters with a few bad apples mixed in.” It’s a narrative born from Chinese Communist Party influence designed to draw as many people to the “protests” as possible in hopes that they will escalate. The constant drumbeat of that narrative isn’t just coming from anti-Trump media types. It is pervasive across media reports and is unambiguously false to anyone paying a smidgen of attention to what’s really going on.

The fourth group is a mystery. Conspiracy theorists have pointed to George Soros and his various “humanitarian” NGOs that often spark and even fund anarchic activities in America and Europe whenever opportunities like these arise. Others are pointing to American Communists or far-left pseudo-anarchy groups pushing for chaos as a prelude to the totalitarian Marxism that is their end goal. At this point, these elitists who are calling the shots are unknown to the public. Hopefully, the Department of Justice is already establishing the connections and preparing to make arrests. Wishful thinking, I know, but we could use all the hope we can get right now.

All of this points to one unimpeachable truth: The radical left in America hates the nation in which they live. They hate everything that makes this country great and will do whatever they can to tear it down in an effort to eliminate the things they wish would change. If you love America, they hate you. If you’re willing to defend America and the Constitution, they especially hate you. They’re driving these riots in an effort to destabilize this country and usher in the universal authoritarianism they crave.

We’re at a crucial moment in history, one in which our leaders must tread very carefully. If this situation continues to devolve, the President will have no choice but to work with mayors and governors to initiate full-blown martial law in many areas. This is what the radical leftists want. If that happens, they will simply move their operations to areas in which martial law is not present. They are starting in metro areas but their goal is to spread it to the entire nation. They want no community to feel safe. They want chaos to be ubiquitous.

As the President and many on the right have said in recent days, this is domestic terrorism. In fact, it’s the most blatant and widespread case of domestic terrorism this nation has ever seen. And through it all, any mentions of George Floyd are window dressing. This is no longer about George Floyd or any people of color who have been murdered in recent weeks. They were the spark to predicate the launch of an old, well-planned operation by forces who have dreamed of this situation for years. Now that it’s here, we should be just as concerned with what they have planned next as we are with the rioting that’s happening right before our eyes.

On the latest episode of the Non-Compliant America podcast, I dove deeper into this situation to demonstrate without a shadow of a doubt that this operation was planned and executed based on a pure hatred for the United States of America. I strongly encourage listeners to subscribe, leave us reviews, and help get the word out so more people can understand the nature of this evil event.

This isn’t about differing perspectives. This is about extremism and evil permeating across an ideology that hates America, conservatism, and faith. Media supports it. Hollywood loves it. Democrats thrive by it. And America continues to burn.