This should have been satire. Unfortunately, it’s real life. Business Insider, a relatively neutral news outlet that leans to the left but less than most in mainstream media, posted an article that I assumed would be quick and partially humorous. Someone had noticed that the President’s salt and pepper shakers were larger than everyone else’s. It’s funny, but is it newsworthy? No. It’s the type of thing that deserves a quick mention, perhaps a Tweet or a three-paragraph article with an image or two.
Business Insider went much further than that, doing a deep dive into past images of the President eating and comparing him to previous presidents who used the same salt and pepper shakers as others. It’s modern investigative journalism in a nutshell. 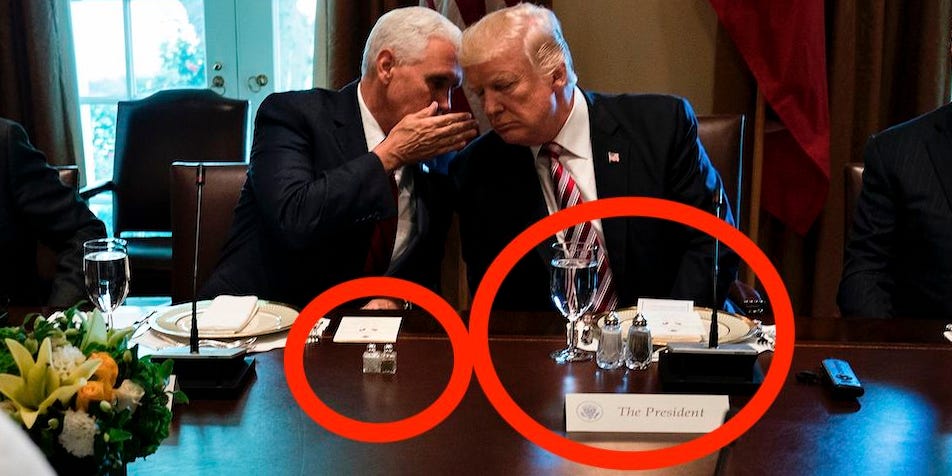 Mark Knoller, CBS News’ White House correspondent, pointed out how much bigger Trump’s shakers were in a tweet on Thursday.

Insider combed the photo archives and found that Trump more often than not gets much larger salt and pepper shakers than other foreign leaders or American politicians when dining at the White House. And we couldn’t find instances of Trump’s most recent predecessors using larger shakers than those of their guests.

The story is, of course, a clickbait article meant to not only trap curious readers but also to get right-leaning jounalists like me to call them out. I’ll bite. It’s worth giving them a few extra clicks if only to point out the lunacy of leftist journalism in the age of Trump.
To their credit, they gave it the full treatment, as if knowing that since people were going to be taking the clickbait, they might as well give them enough pictures and commentary to make it seem like a real news story even if it isn’t real news. The images they hunted down for various presidents likely wasn’t all that time-consuming, but it wasn’t the quick note this type of story deserves.
It’s not just an example of lowered journalistic standards. It points to a populace that willingly empowers this type of reporting for one of two reasons. The angry mob that hates the President is always on the lookout for more reasons to justify their hatred. Meanwhile, those of us who call out the left’s incessant fake news are ready to pounce at every example of Trump Derangement Syndrome on display by the press. From Business Insider’s perspective, this “scoop” likely seemed like a win-win for them.
Fake news is abundant. Superfluous news is as well. One can argue it’s been a problem for much longer than President Trump has been in office, which is true. But it sure seems like there’s more of it now than before TDS became a thing.