Ever since the annexation of Crimea, Russia has undertaken efforts to remove the region’s dependency from Ukraine. The most noteworthy accomplishment in this quest is a giant bridge crossing the Kerch Strait from Crimea to southern Russia. This renewed conflict began with Russia blocking the bridge with a cargo ship so that Ukrainian ships could not pass underneath.
After dialog between the two forces the Russian coast guard opened fire and then boarded the Ukrainian vessels. It’s easy to see this as Russian aggression, but the unpopular President Petro Poroshenko is swift to use this skirmish to implement martial law for the first time in Ukraine’s civil war conflict, with an election nearing. 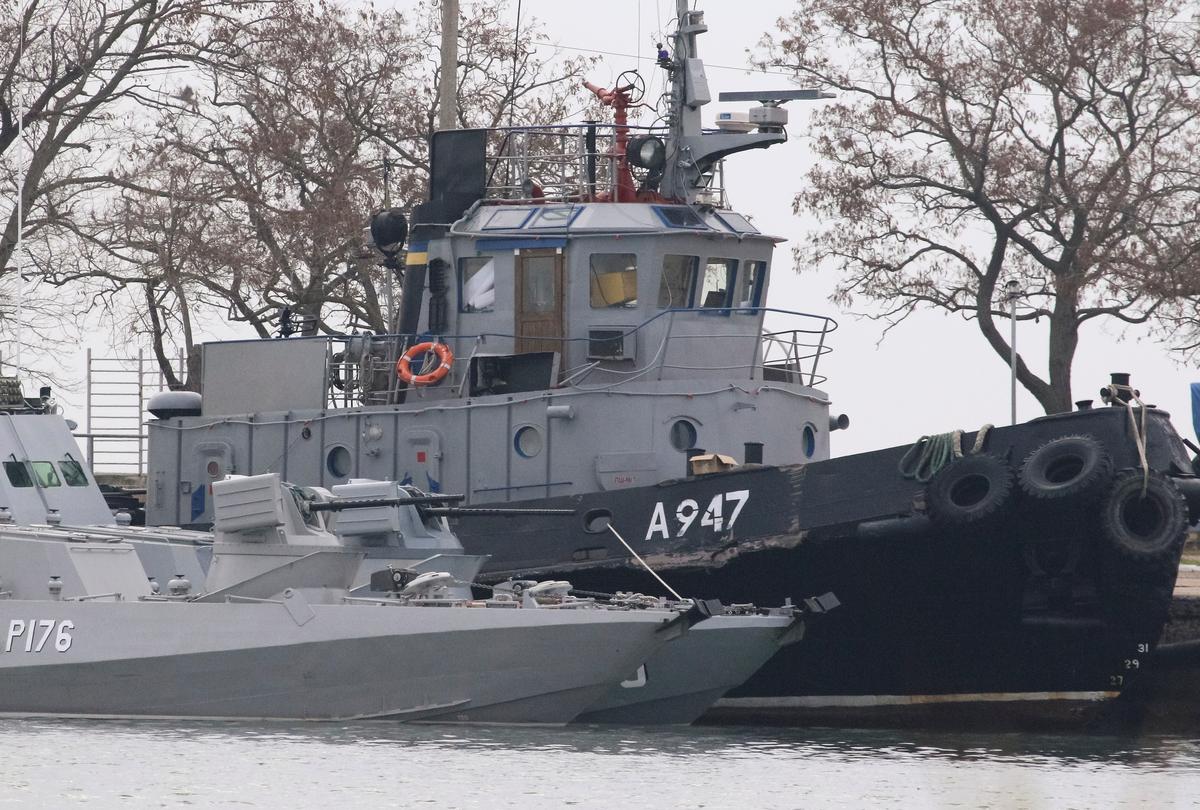 Russia annexed Crimea in 2014 and then built a giant road bridge linking it to southern Russia that straddles the Kerch Strait – a narrow stretch of water that links the Black Sea to the Sea of Azov, which is home to two of Ukraine’s most important ports.
Russia’s control of Crimea, where its Black Sea Fleet is based, and of the bridge mean it is able to control shipping flows.
The crisis began on Sunday after Russia stopped the three Ukrainian ships from entering the Sea of Azov by placing a cargo ship beneath the bridge.
The Ukrainian navy said on social media six Ukrainian sailors were wounded in the subsequent seizure of its ships, which appear to have been rammed and boarded, and that the Russian attack on them had occurred after they had retreated and headed back towards Odessa, the Black Sea port from where they had begun their journey.
“After leaving the 12-mile zone, the Russian Federation’s FSB (security service) opened fire at the flotilla belonging to … the armed forces of Ukraine,” it said in a statement.
A bilateral treaty gives both Russia and Ukraine the right to use the Sea of Azov, which lies between them and is linked by the narrow Kerch Strait to the Black Sea. Tension has risen since Russia annexed Crimea, with both countries complaining about shipping delays and harassment.
Russia’s border guard service accused Ukraine earlier on Sunday of not informing it in advance of the three ships’ journey, something Kiev denied.
Russia said the Ukrainian ships had been maneuvering dangerously and ignoring its instructions with the aim of stirring up tensions.
Russian politicians denounced Kiev, saying the incident looked like a calculated bid by Poroshenko to increase his popularity ahead of an election next year.

While it is easy to dismiss the Russian account, the actions further taken by Ukrainian President Poroshenko are the first pieces of evidence in corroboration.

If a Martial Law was to be imposed in #Ukraine tonight here's some of the keypoints it would impose. Informations via @HromadskeUA pic.twitter.com/20vi6ojKci

Ukraine’s president supports imposition of martial law and it will be put to parliament on Monday. Will March’s election be delayed ? Plenty will see ulterior motives… https://t.co/g9YgsRvpep

This declaration of war and martial law would prevent the election scheduled to take place in March of 2019 if still implemented. In this election, Poroshenko’s chances are not great for an incumbent, as noted by a Ukrainian media source. Perhaps a harder stance on the war would boost popularity.

BREAKING: Ukraine has officially imposed Martial Law for at least 30 days. The military has been fully mobilized and reserve forces are activating. The government has been given full wartime powers over the the country

https://twitter.com/Mirage_Intl/status/1067174774303088645
Another interesting component to the martial law is the population that would be impacted. Ethnic Ukrainians would not be as impacted as the Russian speaking regions. It’s also worth noting that martial law is declared in areas not under Kiev’s control.

Poroshenko wants to mobilize the military, but what exactly are his end goals? Ukraine cannot possibly win a conventional war against Russia. Nor will this skirmish be enough to draw the United States into war with Russia, seeing that Ukraine is not a part of NATO. Perhaps this will be Ukraine’s inspiration to defeat the Russian-backed rebels in east Ukraine. This appears to be the only achievable goal for Poroshenko as the soon to be postponed election approaches.
Still, if this is his goal, the Ukrainian military will be without naval shipments in its key ports along the coast from the Donetsk region to Crimea. If Ukraine, in the process of attacking the rebels, declares war on Russia, Russia may respond with its own declaration, openly supporting the rebels with air strikes and naval support. Such declaration of war would be disastrous for Ukraine, but without such declaration of war, it makes no sense to impose martial law. Poroshenko insists that Russia is preparing an invasion.

On social media, comparisons to appeasement and Hitler are being made. But this conflict resembles World War I more than World War II. A key difference stands to be the lack of entangled alliances, at least for Ukraine. But just like in the war 100 years ago, world leaders’ prides can result in elongated bloody conflict. However, if Poroshenko does indeed have ulterior motives, which after exploring scenarios seems likely, Ukraine could be entering a dark chapter back in the hands of dictatorship or at a minimum further political disarray counterproductive to easing the crisis.
Throughout history, the path to dictatorship uses many means, especially democratic ones, to perpetuate a leader’s power whether it be Putin in Russia, Ergodan in Turkey, or Mosaddegh in Iran. It’s important to keep this in mind when martial law is enforced.

Media, leftists outraged over tear gas but were silent when Obama used it dozens of times at the border