A great deal of financial information on campaigns is made available and easy to navigate courtesy of the Center for Responsive Politics. I have analyzed data from the CRP on the 14 battleground Senate races occurring in this midterm election. Perhaps you’ve seen many headlines about Democrats doing well with fundraising, most notably as of late Beto O’Rourke’s fundraising feat. In fact one of the first findings was how much the Democrats have raised despite the rhetoric that Republicans are the “party of the rich”. But it is well known, or at least it should be, that money alone doesn’t win elections. Candidates do.
In analyzing the data I sought to see whether the devotion of funds by Democrats and Republicans would give insights to predicting the midterm results. Instead, I found that Republicans are generally more strategic with their donating. In my earlier piece, Mapping the Senate in the midst of midterm elections, I analyzed 14 battleground races setting up the stage for further exploration and analysis. Here I analyze the same data from those same 14 races to see if the money can bring some clarity to the various toss ups.

In an absolute best case scenario, the Republicans hold on to all of their seats and flip 9 Senate seats from blue to red. Those seats are identified in pink. The pink states in addition to the red would give the GOP a massive legislative advantage if also matched by a good day for their House candidates. 9 seats is a red tsunami, but netting 3 or 4 is still a fantastic day that will surely crush Democrat expectations of a Blue Wave.

This is the absolute best case scenario for Democrats, 51 seats. This would give the Democrats just enough power, if united, to control the Senate. It requires the Blue Wave to maintain all of its seats and win over an additional 3 seats from Republicans. Note: the race in Texas is not close enough to be considered in this scenario and while we’re at it neither is North Dakota, but if Democrats are to control the Senate every incumbent is in a must win. 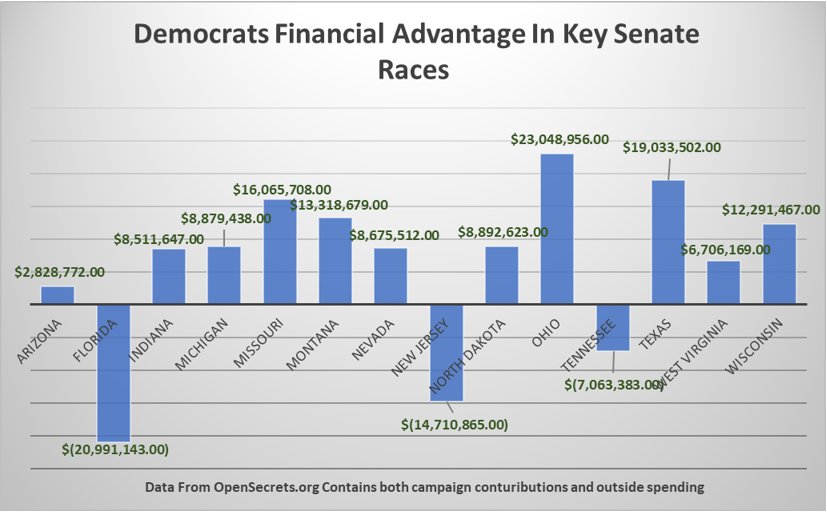 The Democrats have far more seats to defend and far more seats to lose. So with having incumbents, generally means having more money. A few incumbents, however, are being outspent such as Bill Nelson (D-FL), Bob Menendez (D-NJ), Dean Heller (R-NV), and even Ted Cruz (R-TX). There are two vacant seats held by Republicans where Democrats have the financial advantage (Arizona and Tennessee). Is money a huge advantage or have the Democrats discovered the concept of diminishing returns?
It is very possible Democrats are putting more money than necessary in campaigns. Take Ohio where they have a $23 million dollar advantage in a race where the Republican candidate is a longshot. This graph is particularly meaningful in measuring the efficiency of each party with campaign funds. Republicans, like Ted Cruz, have demonstrated a deal of business sense when it comes to managing campaigns in the past. 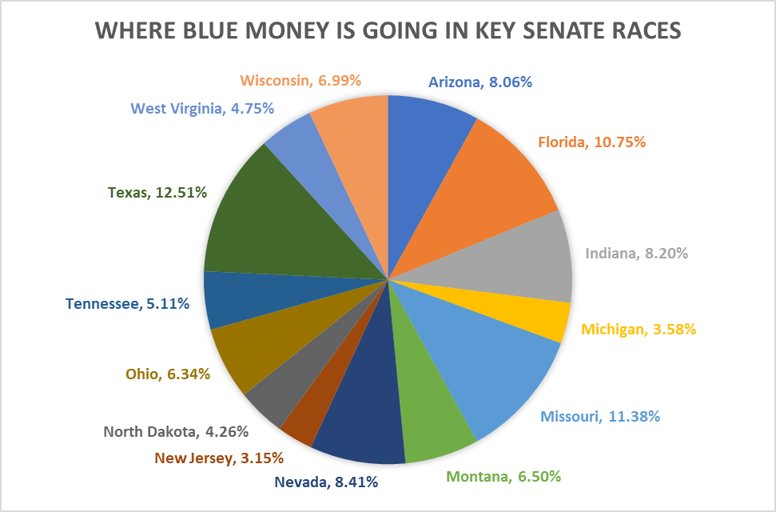 The largest slice of the blue money pie is gong to Beto O’Rourke. Despite being a longshot, Beto has accomplished great feats in fundraising. Conservatives aren’t as intimidated by O’Rourke’s fundraising and media attention as one might think. This 61 million dollar campaign is loaded with funds that otherwise could have gone to more competitive Democrats.
Overall the Democrats’ breakdown is a reflection of the most savvy campaigners. But even Phil Bredesen is a solid candidate who only received 5.11% of the pie. Heidi Heitkamp is shorted in her struggling incumbent bid. And almost nobody wants to help out Bob Menendez who received the smallest slice. The Democrats are after the bigger states in both size and population. They want Ted Cruz out of the Senate badly. They want to hold on with a Democrat in the swing stat of Florida.
There also appears to be a certain amount of over spending among the Democrats. Sherrod Brown is likely going to win in Ohio and enjoys a insurmountable financial advantage. Of all the Democrat funds he should have received around what was dedicated to the campaign in Michigan.
The distribution of Democrat funds shows ambition but little coherence to an overall strategy. The slice of the pie seems dependent on the gravitation of their candidate. It’s less about flipping seats and keeping the GOP at bay rather than supporting popular candidates. 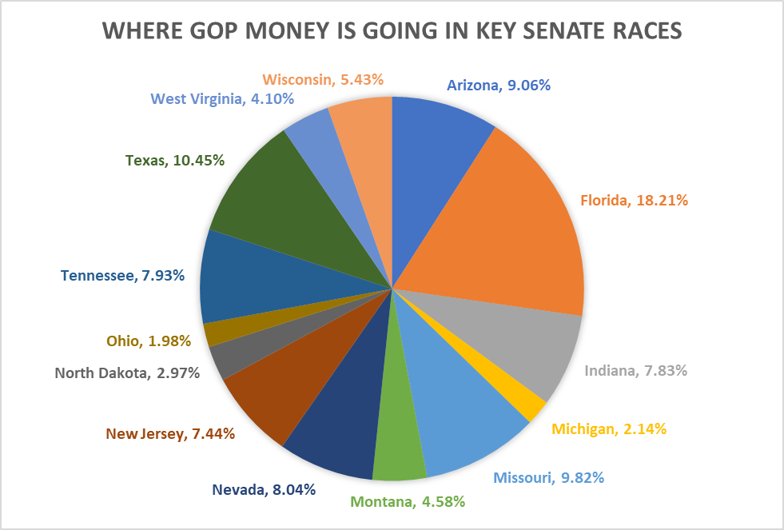 In contrast, the Republican distribution of funds shows an obvious triage. Longshots like John James in Michigan and Jim Renacci in Ohio are getting little. The effort in Florida, on the other draws the most attention. Florida receiving 18% shows a disproportionate vested interest in the state. This can be attributed to Rick Scott, a party favorite and a formidable candidate to oust Bill Nelson. The Senate race is also nicely aligned with the gubernatorial race. The Republicans, if smart, will want to tilt Florida red keeping it from being a swing state in 2020 and beyond. A big election win here would help in that effort. Another factor at play is redistricting in 2020. Florida is anticipated to be awarded 2-3 congressional seats. At number two is Ted Cruz. Texas being a larger state and the Democrats bringing a more enthusiastic candidate are the reason for that. At three and four are Missouri and Arizona.
The Republicans aren’t throwing money at lost causes. The highest risk for Republicans in a conventional sense appears to be Bob Hugin in New Jersey. Yet the staunch blue state will likely see difficulty in reelecting a scandal ridden incumbent. Republicans sense blood and are investigating in the race at a rate comparable to Indiana or Tennessee.

The most effortless win in the election may in fact come from the ousting of Heidi Heitkamp in North Dakota. The Republicans throwing less than 3% behind a challenger is a bargain of a return. All signs in North Dakota point to a GOP victory, and the Republicans will achieve that despite being outspent. Another interesting contrast is that the Republicans aren’t overspending in any of these battleground Senate races. The largest argument for overspending may be found in Texas, but while Cruz is slated to win, he will still have to work for that win.

In contrast, the Republican distribution of funds is more economical. They reflect both the size of the state and the chances of winning. This takes away from what previously, in Chart 3, could have suggested that the GOP underfunded its Senate candidates in various states. Instead the Republicans are revealed to run their campaigns like a business or investment.
Meanwhile, the Democrats finance their campaigns as a whole like a popularity contest that is a reflection of how popular their candidate is along with how unpopular the Republican candidate is, to them. And while this overall trend is drawn from the donations of many individuals and organizations, that is the source of the significance. Republicans, both individuals and organizations, are very economical about their financial contributions.
The next question is: are they just as economical with their campaign spending as they are with their giving? This question can only be answered in full after the midterm election, but North Dakota appears to be evidence of that answer being yes.

Andrew Gillum is blatantly lying to Floridians. Even NYT and CNN are admitting it.

Caravan 2.0 is poised to leave from El Salvador on Halloween