The Baltimore Ravens sent a letter to the fans and community penned by team President, Dick Cass. The letter acknowledges the role that the anthem protesting in London played on team attendance this season. To many, this is a rather obvious admission, but the powers of liberal Twitter and the media seek to find other factors to blame. But before we dig through the Twitter’s chosen tweets via Moments, lets read the part of the letter most applicable: 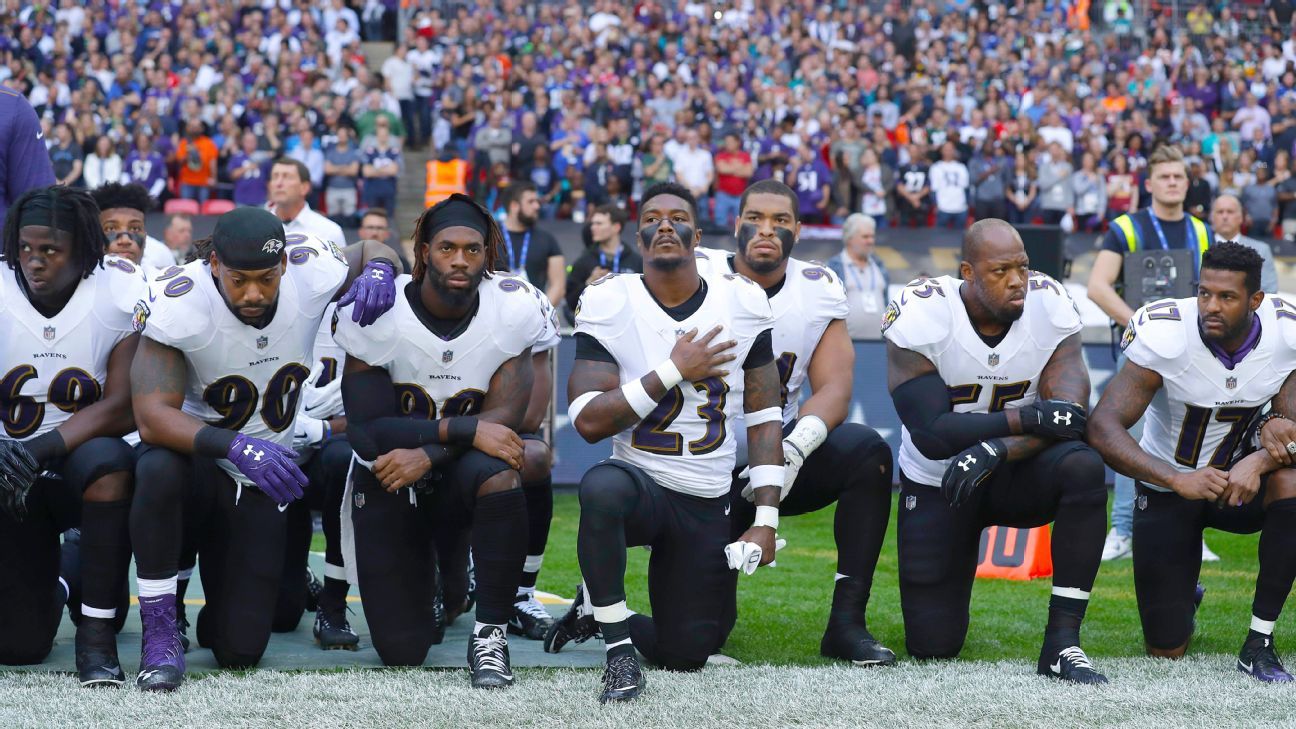 We had the poor showing in London, complicated by the kneeling of a dozen players during the National Anthem. That became an emotional and divisive issue. We know that hurt some of you. Others saw it differently and welcomed the dialogue that followed. Others bluntly told us to keep statements and protests out of the game. There are some of you who have stayed away from our games.

We have had significant numbers of no-shows in the past when our play on the field has not met the high standard we and you have set for the Ravens. But this year has been different. The numbers are higher, and it is noticeable. There are a number of reasons for the no-shows, but surely the one-time protest in London has been a factor.
We have responded to your concerns about the protest by re-doubling the efforts of both the organization and our players to make the Baltimore area a better community. We have also reached out to a number of you who wrote or called about the protest. I personally made a number of phone calls and met with some of you. Some of my Ravens colleagues have also made a number of calls. While we have not been able to reach all of you, we have learned a lot from these interactions.

Excuse 1: They protested in London not at home

Again, this happened in London. Ravens players have never protested during the anthem at a home game. The closest they came was kneeling together in prayer before standing up for the anthem.

The Ravens’ 2017 attendance puts them right in the middle of the pack, and they should end up just about where they did in 2016 once the season is over. There’s nothing to do but roll your eyes at Cass and this letter, but do prepare yourself to start hearing more half-baked excuses in the future if the NFL’s popularity continues to stagnate. This is probably the last year anyone will have the anthem protests to blame, so next season it will probably be… dancing? Yeah, let’s go with dancing.

This is the dumbest of reasons.

The fact that it was in London made it worse.

Has he seen their offense lately?

This response got a number of people citing this inconvenient fact.

Obviously you haven't. They have put up the most points in the NFL since week 8

Make no mistake, the Ravens offense is terrible and they have had an incredibly easy schedule. However, this was true for their two previous playoffless seasons. They have no quarterback (Joe Flacco is not elite), no receivers and have only just now seemingly found a running back to solve that gaping problem. But bad offense isn’t the cause of attendance being down, especially with playoffs on the line. Usually at this point in the season, the Ravens want to sell playoff tickets and prices are rallying.

Excuse 3: Tickets are too expensive

Tickets cost too much and Ravens aren’t very good. This applies to half the league as well. Oh, and don’t get upset when black people demand decency and basic respect in their communities.

This would be true if it weren’t blatantly false at the moment. Ticket prices are in the trash compared to what they should be for a playoff bound team. A simple search on Ticket Exchange reveals $60+ seats going for $39+ fees. The market has driven prices down on a once prized experience.

Ravens are probably going to the playoffs and many ticket prices have been below $20. Nice try though.

Of course Twitter leaves out responses that don’t echo their views… But if Tickets are this cheap with playoff picture, people should be flocking to M&T Banks Stadium. It’s supply and demand. Accept the people who have tickets aren’t going.

The majority of the tickets are already sold. This isn’t the Orioles where you can walk up to the box office most games and get a ticket. People have the tickets and are jut deciding not to go

One in five people in Baltimore live in poverty and over 60% of homes are considered “low income.”

You do the math. https://t.co/9zBFkZyPaI

This person thinks only people who live in Baltimore attend games. Never mind outside of Baltimore are the counties, Howard, Anne Arundle, Carroll, Hartford, Baltimore County (yes, I live in the area). All of these counties and these counties have higher incomes and likely majority of the attendees.

These excuses ignore the letter written by the team President in favor of their own narrative. The letter explicitly explains that the Ravens reached out to the disgruntled fans, and were told by them that the protesting was an issue. I know these fans. I was one. Ticket prices are so bad they’d rather eat them in protest or donate them to charity for the tax write-off on the face value of the ticket.
Twitter and media outlets would much rather spin the narrative to make it look like a playoff-bound team is scapegoating. The Ravens up until London had nothing to fear about team attendance. Their schedule was easy enough to land them in this position before a long stretch of backup quarterbacks. Twitter and other outlets are simply suppressing the truth because they don’t want to admit their ideology broke the NFL.

Not listening to the fans is how the NFL got into the mess it’s in, and unfortunately the Ravens probably aren’t doing enough to get themselves out. Teams need to acknowledge that anthem protesting hurt the NFL. They also need to apologize for it, which the Ravens didn’t do, at least in their letter. They also need to take corrective actions. Spending money on cultural Marxism disguised as “social justice” with the money for other causes is not a corrective action. The NFL will likely suffer more before they realize this partially due to the media spin.