by Konstantinos Roditis
in News, Opinions

The California Public Employees’ Retirement System (CalPERS) is in the news once again. I wish I could report that with a record high bull market that CalPERS was well on its way to becoming solvent. Unfortunately, CalPERS, the largest public pension fund of approximately $345 billion has roughly $138 billion in unfunded state actuarial liabilities. Due to unrealistic actuarial assumptions and poor investments in Environmental, Social, and Governance (ESG) funds; CalPERS is moving closer to collapse than solvency.
In simpler terms, what is going on is that CalPERS is playing politics with retiree and taxpayers’ money. Meaning future, and current retirees will inevitably see a dramatic cut in their pension benefits; which they have been paying into their entire careers. Cuts in local and state government services to redirect funds into CalPERS as well as the inevitable tax increase.

One of the ways they played politics with our money was the passage of SB 400 in 1999, which gave government employees a retirement security reserved for the wealthy. This meant that many retirees could retire at 55 and in most cases collect more than half their highest salary for life. California Highway Patrol officers could retire at 50 and receive as much as 90% of their peak pay. So basically, they dramatically increased pension benefits without any way of paying for it.
Why do this? Taking taxpayer dollars and using it for your political campaign is illegal. But union contributions are perfectly legal. Government employees are not to blame; it’s their unions. Government employees have no choice, they must be part of the union and pay union dues. Most unions are like most crony capitalistic corporations. They want to limit competition through government actions and want to make money for their shareholders.
So unions work hard at eliminating any outsourcing of services and jobs to private companies. If it must be done, it must be a government union member. Meaning more employees will be needed and hired and thus more union dues paid. Unions also work hard to increase pension and salaries because yet again more money means more money for the union. The union bosses or in the corporate world known as CEOs, take those taxpayer-funded union dues and then turn around and give millions to political campaigns. Thus you have essentially laundered millions of dollars of taxpayer money and made it legal to donate to politicians that promise you billions in taxpayer-funded benefits. This is no different then crony capitalism. Different shareholders, same corruption.

Secondly, they play politics by investing in companies that have no promise of a reasonable rate of return. They invested in failing renewable energy companies because it’s more important to invest utilizing ideological metrics than sound fiscal policy. They divested in successful businesses who engage in legal commerce because their products or projects don’t align with their ideological views. They pressured companies to diversify their board of directors to meet their ideological views of diversity, or they will not invest in their companies. This, in essence, is blackmailing businesses to do what CalPERS wants, or they will pull millions if not billions of dollars from these companies.
The consequences of these actions are that many of the most successful and profitable companies with safer and higher rates of return don’t need CalPERS money. They do fine without them. CalPERS, on the other hand, needs to invest their money and thus are limited to less financially stable and untested companies. Companies in desperate need of liquidity will do as CalPERS wants. But in the end, picking companies based on ideology instead of sound fiscal decisions isn’t a sound investment strategy. Thus, lower rates of return and higher risk for loses will continue to create greater insolvency due to these ideological and politically motivated investments. Overall, they could care less because even though they don’t invest their own money in ESGs. Their ideological investing will drive their base to the polls and keep their political coffers full.
But before you think its all about ideology it is not. Crony capitalism plays a part as well. These companies in desperate need of capital don’t do what CalPERS wants, and that’s all. These same companies turn around and donate back to these same political coalitions which gave them all that money. Why just force the hands of these companies when you can force their hand and expect campaign contributions at the same time? Its a win-win for politicians.

For those unaware. I’m a candidate for California State Controller in 2018. When I’m elected, I will be an ex officio member of CalPERS. As Controller, I can independently audit government agencies that spend state funds. With this authority, I will work to eliminate CalPERS. Due to the corrupt nature of politics in Sacramento, this will most likely happen through a voter-approved ballot measure. As Controller, my examination and audits will be used to expose the mismanagement and most likely propose the following changes.
First, the State will no longer invest on behalf of current or retired government employees. Responsibility will be handed over to their unions. Unions told us the pension benefit found in SB 400 were not excessive and could be paid for and managed. If that is the case, they should handle the investment portfolio on behalf of their members. I understand that union members are taxpayers, but the entire population of California taxpayers shouldn’t be on the hook for their union’s decision to push for pension benefits like those found in SB 400. The state and local municipalities that participate in CalPERS will contribute a fixed percentage of current employees salaries and the union, not the taxpayer, will be responsible for the consequences of making ideological investments.
Secondly, all future state employees can either decide to have their unions invest in a pension on their behalf or they can decide to invest on their own through an IRA or 401k. Current government employees can also decide to pull out a portion of their funds and invest on their own. With CalPERS heading for a fiscal cliff, we should allow government employees to determine what is best for them.
By doing this, we can fix the problems we are currently experiencing with this pension crisis. Taxpayers are protected, and government agencies will have a set percentage based on wages on what they must contribute to their employees’ retirement. If we take sound fiscally responsible actions, we can not only increase the rate of return on CalPERS investments, but we can protect taxpayers, reduce corruption, and give great stability and certainty to government workers.

The nation’s largest public pension fund is leaving money on the table by favoring environmental and social causes in its portfolio, a business-backed nonprofit argues in a study it’s releasing Tuesday on the California Public Employees Retirement System.

The report by the American Council for Capital Formation criticizes CalPERS’ sustainable investing strategies, which include engaging with companies to encourage them to address climate change, pressuring companies to diversify their boards of directors and investing in certain funds that nurture companies with those priorities. 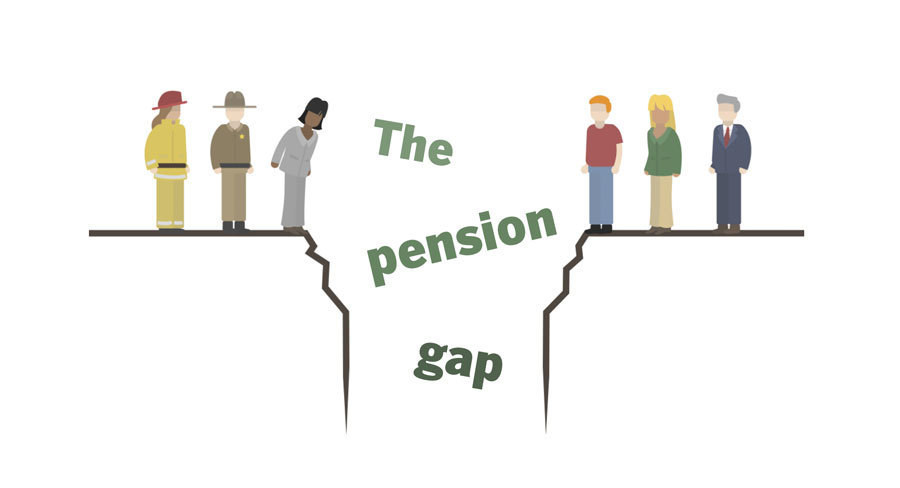 More than 200,000 civil servants became eligible to retire at 55 — and in many cases collect more than half their highest salary for life. California Highway Patrol officers could retire at 50 and receive as much as 90% of their peak pay for as long as they lived.

CalPERS had projected in 1999 that the improved benefits would cause no increase in the state’s annual pension contributions over the next 11 years. In fact, the state had to raise its payments by a total of $18 billion over that period to fill the gap, according to an analysis of CalPERS data.
The pension fund has not been able to catch up, even though financial markets eventually rebounded. That’s because during the lean years, older employees kept retiring and younger ones continued to build up credit toward their own pensions. Pay raises and extended lifespans have magnified the impact of the sweetened benefits.
By far the largest group of state workers — office workers at the Department of Motor Vehicles, the Department of Social Services and dozens of other agencies — contributed between 5% and 11% of their salary in 2015, and the state kicked in an additional 24%. To fund their more costly benefits, Highway Patrol officers contributed 11.5% of pay and the state added 42%.

The nation’s largest public pension fund, the California Public Employees’ Retirement System (CalPERS), is severely underfunded.  With more than $300 billion in assets, CalPERS future liability exceeds those assets by more than $100 billion. How did things get so bad? A number of factors have contributed to CalPERS’s relatively recent and precipitous decline.