Corruption, ascension, and oil: Why Saudi Arabia's moves should worry the world

Saudi Arabia has dominated the world’s oil exports for decades. They’ve used this status to wield great influence over every industrialized nation. Sometimes this influence is indirect as nations like Russia and China must take cues on prices even when they aren’t trading with the Saudis. Others, including the United States, have been forced to change policies and relationships based upon the will of Saudi Arabia’s leaders.
Things have been changing in recent years. There are more players in the game. OPEC, which is essentially controlled by Saudi Arabia, is still the biggest player in oil town, but their power has been fading. The Saudis are no longer able to control every facet of oil production and distribution around the world. Moreover, the world’s dependency on oil is waning. Fossil fuels are still the driving force for industry and travel, but technology is pushing away from them. Though there are greater needs than ever before for energy, those needs are being met by a more diverse range of sources. Efficiency is a priority for everyone from automakers to farmers.
There’s another thing hurting the Saudis that isn’t discussed as often as the previous two challenges. They’ve blown their money. Instead of investing into infrastructure and diversifying their economic footprint, they’ve lived the last four decades under the illusion that their money wells were always going to sustain them. They didn’t start planning for a post-oil world until recently and if they don’t make major changes soon, it may be too late.
All of these factors are in play with their recent moves towards modernization. Crown Prince Mohammed bin Salman has been spearheading the charge towards a new Saudi Arabia, but he’s facing roadblocks both inside and outside of the kingdom. How he handles those roadblocks will affect a good chunk of the world, including the United States. Based upon his actions this weekend, we should be worried he’s heading in a precarious direction that could cause turmoil worldwide.

17 major players in the Saudi government from princes to ministers were arrested over the weekend as part of King Salman’s anti-corruption push. This push is under the control of Prince Mohammed for a very important reason. He’s solidifying power and eliminating challenges to his ascension to the thrown.
Corruption is an ironic avenue through which the Crown is pursuing Prince Mohammed’s adversaries. Who is at the center of this corruption? The Crown itself. That means that they know where all the bodies are buried. They know every financial move made by all who have power in the kingdom. Of course, they’ll choose corruption as the way to mow down potential roadblocks. They have dirt on literally everyone.
It’s like the CIA taking down bureau chiefs for keeping secrets. They all keep secrets just as everyone in the Saudi government practices corruption of some sort. That’s the point. They were able to isolate those opposed to Prince Mohammed in a demonstration meant for them as well as anyone else who would fight him once the King dies. Anyone even thinking about supporting a different choice will now know they’ll face repercussions if they do. Those who were arrested have a choice: devotion or penalties. Nobody is exempt. They must either fall in line or fall on their swords.

Why this is bad

Contrary to popular belief, Saudi Arabia is anti-American. They’re anti-everyone. They play their “allies” for fools. This isn’t a secret. Every American president since Nixon has willfully accepted the unrighteous relationship we’ve maintained with the House of Saud because they’ve empowered the dollar to be the world’s reserve currency. They’ve given us much of the power we’ve enjoyed since the 1970s by being the producers and allowing us to be the bankers.
This isn’t a conspiracy theory. It’s just not talked about very much in public circles because to admit it would mean trouble for this “mutually beneficial” relationship. This is why every President, even President Trump, has looked the other way and even supported moves made by the Saudis that attack human rights, American excpetionalism, and the well-being of our nation’s stability. We need them to keep the dollar from collapsing under the weight of untenable debt. They need us to keep the wolves who would have at them at bay.
Despite the support Prince Mohammed has received from the White House, they are aware that he could take the nation in a direction that opposes our interests. This is why President Trump practically begged them to open their IPO for Saudi Aramco on the NYSE.

Would very much appreciate Saudi Arabia doing their IPO of Aramco with the New York Stock Exchange. Important to the United States!

This is why Jared Kushner was sent on an unannounced trip to Saudi Arabia last week. 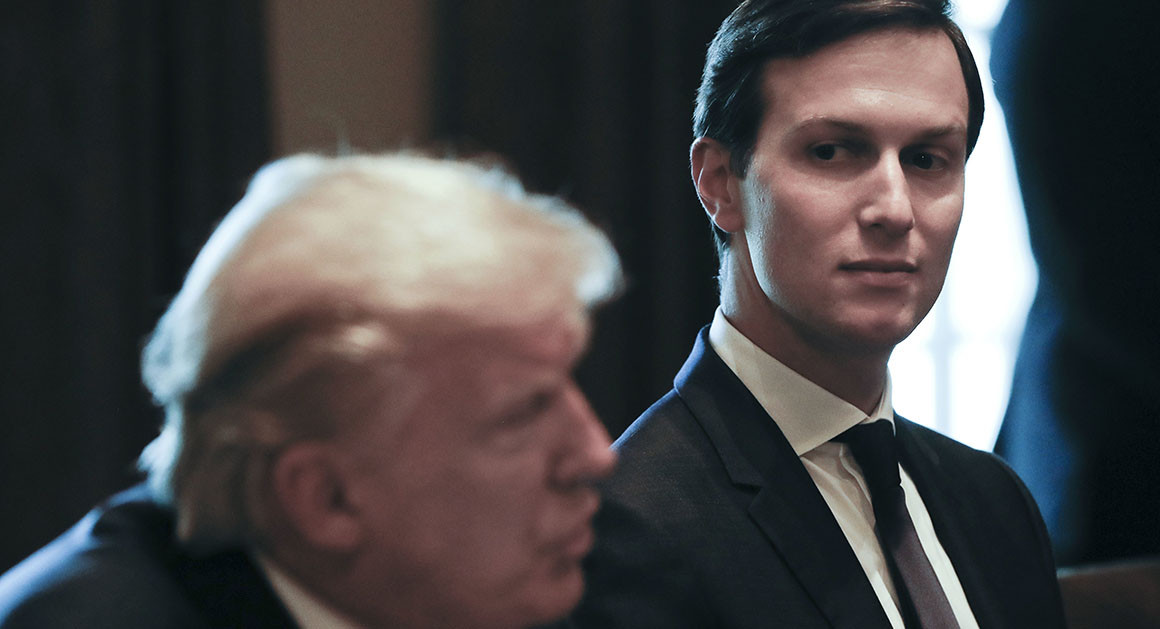 Kushner left Washington, D.C., via commercial airline on Wednesday for the trip, which was not announced to the public, a White House official told POLITICO. He traveled separately from Treasury Secretary Steven Mnuchin, who led a delegation to Riyadh last week to focus on combating terrorist financing.

Kushner was accompanied in the region by deputy national security adviser Dina Powell and Middle East envoy Jason Greenblatt. Greenblatt continued from Saudi Arabia to Amman, Jordan; Cairo; the West Bank city of Ramallah; and Jerusalem, where he was on Sunday.

It isn’t just London or Tokyo that makes the U.S. fear the Saudis won’t use the NYSE. There are rumors that Russia or China could work private investment deals with Saudi Aramco. Why? Because they would require much less transparency than the major stock exchanges. It might not be as lucrative for the Crown, but it would prevent them from having to disclose and eliminate corrupt portions of the money-flow through the company. In other words, they wouldn’t have to let the world know a bigger chunk of the profits go to the crown than they’ve been reporting.
Prince Mohammed wants to modernize Saudi Arabia. This makes sense for them and could even be beneficial for the world if they were to truly tackle corruption. They won’t. Doing so would mean draining much of the power the Crown currently enjoys. They are still extremely prosperous, so they’re not at a point that they’d be willing to trade transparency for security. As far as Prince Mohammed is concerned, they’re still a generation or two away from collapse. They have time to fix it. Why give up an ounce of power now when it’s not required?
The answer: they won’t. That was essentially confirmed by this weekend’s purge of Prince Mohammed’s adversaries.

Prince Mohammed is 32-years-old. He has the vitality and ambition to lead the nation for several decades. Moving against his opponents now means he’s starting off his reign with the same iron grip his father has held. If anything, he’s demonstrating an even stronger grip before he’s even ascended to the throne. This does not bode well for a world that is dependent on their direction regarding oil. It’s even worse for the United States’ dependence on them to keep the dollar at the center of world economics. If there’s no plan-B that doesn’t include Saudi Arabia’s support, the U.S. government needs to start putting that plan together immediately.

For years, Saudis have complained of rampant corruption and misuse of public funds by top officials in a system where nepotism is also widespread.

The public would surely welcome efforts to eradicate both, particularly as low oil prices hurt the economy, but the arrests have simultaneously whipped up “apprehension and fear”, said Madawi Al-Rasheed, who wrote several books on Saudi Arabia and is a London-based critic of its leadership.

Saudi royals view themselves as The Party, sharing power and ruling by consent, in an arrangement that is largely opaque. What is absolutely clear after Saturday’s “Night of the Long Knives” is that Crown Prince Muhammad bin Salman is upending this arrangement and centralizing all power within his position as crown prince.

This purge comes on the heels of complete intolerance for even mild criticism of Mohammed bin Salman’s reforms, resulting in at least 70 arrests that have, unfortunately, garnered far less attention. Many of us living outside Saudi Arabia will not return home for fear of the same fate. Our families have been targeted instead.

Why he moved at this precise moment is not quite clear: Bin Salman likely either saw some threat looming that he needed to head off, or an opportunity to cement his authority and cut off possible rivals to his claim to the throne. As the favorite son and de facto regent of his father, the elderly, Alzheimers-suffering King Salman bin Abdulaziz, bin Salman was already in a position of strength, but he’s alienated a lot of his relatives to get to where he is, which means he has a good number of people to intimidate before they make trouble.

Hence the instant anti-corruption commission. The power he’s given himself here is considerable, though, and will be used to illiberal ends no matter how much his supporters insist he’s a reformer. Impossible as it sounds, Saudi Arabia is actually getting more authoritarian, in meaningful ways. The separation of control over the security forces was meant to keep any one individual or branch within the family from growing too powerful; bin Salman now has more power than any member of his family was really ever meant to have. He’s also breaking the mold of Saudi patronage politics, the consequences of which are unpredictable.

Sharyl Attkisson's calls out her own once again