Americans for Prosperity just released a video about Ryan Curioni.  He is part of his family’s namesake pizza business and serves on his local board of education in Lodi, New Jersey.  He also runs a political blog dealing with local and state politics called “Lodi by the Numbers.”  Through his blog, he exposed the corruption of the New Jersey Education Association and how the locals pay so much for public education.  Curioni pointed out a press release by AFP New Jersey as well as a story about it in USA Today about how teachers can opt out of the teachers union in spite of NJ not being a right to work state.

Lodi by the Numbers: Teachers deserve more money in their pockets. Too much goes towards union dues. 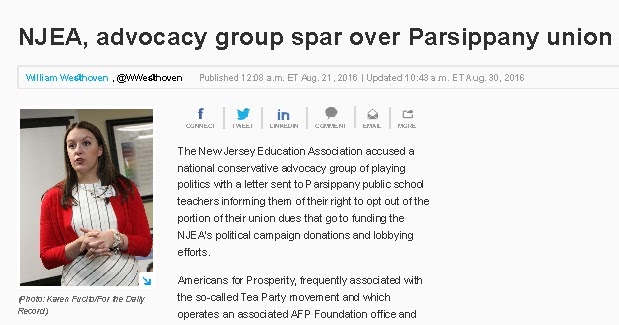 “The New Jersey Education Association spends about 15 to 20 percent of its nearly 200,000 members’ dues on political activities, such as campaign donations and lobbying,” Jedynak wrote in the letter to the Daily Record.

“But while union leadership may support the causes and politicians these donations benefit, not all members may agree.
This violates the First Amendment, which protects the free speech and free association of everyone, union member or not.”

Curioni and his business caught hell, once he posted the article telling teachers how they can opt out of union dues.  He also got not just one but ten flat tires.  Most of the union hacks want him to step down claiming that is blog speaks on behalf of the Lodi Board of Education.  In reality, the blogs speaks only for Ryan Curioni.  What the NJEA and its parent union the National Education Association want is a union sympathetic school board not accountable to the taxpayers (regardless of state) that will give the NEA and state subdivisions whatever power, they desire as they continue using the children in public education as their pawns.
What these teachers and/or their union hacks have done to Curioni is criminal if not downright gangsta.  It’s one thing to demand action and protest against people like Curioni.  It is another to destroy someone else’s property, but it’s no surprise that the unions will try thuggish tactics.  It only intimidates people to cower and submit to their demands while their work placement program for adults continues to fail our children or at least give them an education that will only make them “useful idiots” that help prolong their political goals.  For the most part in the progressives favor.
I believe that unions should be able to exist and help people get a better living.  I don’t support these “closed shops” of any kind that only forces people into the unions for one reason.  Get their money (via membership dues), and speed that wealth to political groups, causes and people that are running for elected offices that the union masterminds support regardless of the members say otherwise.  We must get behind the concept of “Right to Work” and support of such acts in each state.