Everyone goes after the big F’s: Obamacare repeal, the wall, Dreamers, and Iran. I don’t think any Republican president, honestly, would have fared much better on those topics. Immigration reform is a problem that couldn’t be solved by eight years of Reagan or twelve years of Bushes. Even if President Trump rescinded DACA and decertified the Iran deal in his first month in office, lawsuits, Congressional gridlock, and all the other roadblocks to implementation would still haunt these efforts.
Inciting Justice Anthony Kennedy to delay his retirement could be seen as a major fail, but it pales in comparison to the biggest problem Trump has.

This mantra isn’t new. In January 2001, Heritage Foundation fellow Robert Moffit quoted Seth Harris, President Clinton’s senior policy advisor at the Department of Labor. “Personnel is policy,” isn’t just government-speak. It’s how the executive branch functions, and always has since 1789. Stewart Lawrence gave similar advice to Trump in February. And just a few days ago, a letter signed by dozens of Washington beltway leaders urged the Senate to get on with the task of acting on Trump’s executive and judicial nominees.
Trump has failed at both attracting and keeping talent in the White House and the executive branch. His turnover rate at White House and cabinet positions is worse than an “F,” it’s a national security and policy risk. The only constants seem to be his family members, who have been hampered by the continuing Mueller investigation and are now maintaining a low profile.
Failing to fill thousands of mid-level bureaucratic positions has allowed government careerists and “Deep State” operatives opposed to Trump’s presidency, policies and methods to retain immense power. This is not the way to lean the government. It’s the way to fail at implementing a policy to lean the government.

The president seems to be continually at war with his own party, his own administration, and his own Congress. This makes it difficult to see through any policy changes, never mind attract talent. There’s a reason the Treasury Department decided to leave its number two deputy secretary position unfilled. There’s a reason it took over two months to nominate Kristjen Neilsen to take John Kelly’s place at Homeland Security. There’s a reason it will likely take a few months to fill Tom Price’s position at HHS.
The “war footing” gives the administration a choice between nominating candidates for complete loyalty or for talent and ability. Rarely do the two things exist on the same plane (Leon Panetta and Steve Mnuchin might be rare exceptions–at least they are wise enough to keep their disagreements quiet). Slash and burn populists and nationalists like Steve Bannon and Seb Gorka have done more damage to the success of “dismantling the administrative state” than helping it.
Now outside the administration, they’ve turned their guns on Republicans, and Democrats are greedily eyeing 2018 for a comeback. (CNN breathlessly reported just minutes ago that “impeachment” could be on the table if Democrats take the House–good grief.) Of course, the media has always been Trump’s enemy–or frenemy–in a terrible codependency.

In nearly nine months since Trump took office, the Senate has confirmed less than a quarter of 602 key government appointments, according to the Partnership for Public Service. This is a dismal failure, and will make the next three years more swampy than we could imagine. Having those positions filled would go a long way toward moving Trump’s agenda (such as it is) forward.
But many times nobody appears to know what the specific agenda is. At least, having friendly appointees in these positions is better than having Obama holdovers. But that’s what we have. 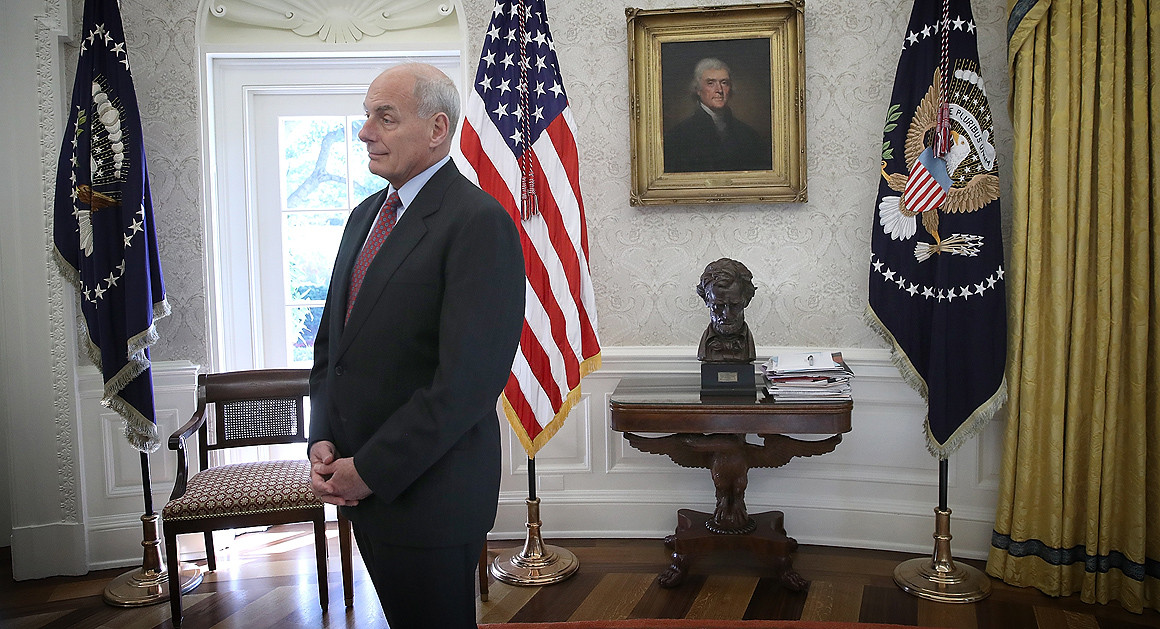 Kelly’s goal, according to 10 interviews with White House officials and advisers close to the administration, is to do a better job of finding candidates for the hundreds of jobs throughout the administration that remain vacant almost nine months into President Donald Trump’s first term. “It’s very difficult to run anything if you don’t have people responsible in those positions.” Kelly entered the White House with an unusually clear understanding of the flaws of the personnel process, according to two people close to him. As a Cabinet pick and then as Department of Homeland Security secretary, Kelly was frequently exasperated during the transition and early days of the administration over his inability to choose his own staff.

Let John Kelly do his job

After imposing order on the White House executive staff, Chief of Staff John Kelly’s next challenge is to impose the same order on the executive branch’s appointment process. Before, it was a jumble of competing interests, pitting Secretary of State Rex Tillerson against former chief strategist Steve Bannon, who strove for doctrinal purity. Kelly was also frustrated, according to reports, and now seeks to cure some of those ills.
It’s not too little too late, if Trump would let Kelly do his job–and it appears the president is doing just that. In fact, Trump has made the presidency into exactly what he wanted it to be: 90 percent bully pulpit and 9.99 percent ceremony. That leaves 0.01 percent where the president actually sets policy or direction in a meaningful way. He’s much more interested at how Fox News or the New York Times will report what he tweets or says than how policy is implemented. He’s much more concerned with his administration looking like “central casting” than attracting actual talent.
But somehow, he’s held on to most of the best of his cabinet. Now the task is to fill the layers beneath the heads.
If this isn’t fixed, Trump could find himself giving up on his most ambitious goal of “draining the swamp” and instead rule over a roost of enemies for his entire term.

Serial entrepreneur. Faith, family, federal republic. One nation, under God, indivisible, with liberty and justice for all.

Freedom From Religion Foundation: Birth control is a right, religious freedom in business, not so much