If the NFL doesn't mandate standing, Goodell's letter is meaningless

NFL Commissioner Roger Goodell wrote a letter to all of his teams imploring their players to stand for the National Anthem. This is a great first step towards moving the country forward from this silly distraction, but unless he, all of the teams, or the players’ union makes it mandatory, it won’t have the desired effect.
Most players who kneel are doing so for one reason: Donald Trump. We know this because their numbers greatly increased after the President turned it into a national issue last month. Before that, there were only a handful of players kneeling, supposedly for social justice causes such as race equality and the like.
Leftists will rage that this is the NFL bowing down to the DC overlords which will encourage many players to act on their own if there’s no mandate. The teams are the most likely avenue to make their players stand, though a decree from Goodell himself or an (unlikely) mandate by the players’ union would also do the trick.
In the letter, Goodell offered to allow “an in-season platform” for players to address their concerns off the field but during the season itself while they’re in the spotlight. How this would manifest is still unclear.
I’ll put my final thoughts below, but first let’s look at the whole letter:

We live in a country that can feel very divided. Sports, and especially the NFL, brings people together and lets them set aside those divisions, at least for a few hours. The current dispute over the National Anthem is threatening to erode the unifying power of our game, and is now dividing us, and our players, from many fans across the country.

I’m very proud of our players and owners who have done the hard work over the past year to listen, understand and attempt to address the underlying issues within their communities. At our September committee meetings, we heard directly from several players about why these issues are so important to them and how we can support their work. And last week, we met with the leadership of the NFLPA and more players to advance the dialogue.

Like many of our fans, we believe that everyone should stand for the National Anthem. It is an important moment in our game. We want to honor our flag and our country, and our fans expect that of us. We also care deeply about our players and respect their opinions and concerns about critical social issues. The controversy over the Anthem is a barrier to having honest conversations and making real progress on the underlying issues. We need to move past this controversy, and we want to do that together with our players.

Building on many discussions with clubs and players, we have worked to develop a plan that we will review with you at next week’s League meeting. This would include such elements as an in-season platform to promote the work of our players on these core issues, and that will help to promote positive change in our country. We want to ensure that any work at the League level is consistent with the work that each club is doing in its own community, and that we dedicate a platform that can enable these initiatives to succeed. Additionally, we will continue the unprecedented dialogue with our players.

I expect and look forward to a full and open discussion of these issues when we meet next week in New York. Everyone involved in the game needs to come together on a path forward to continue to be a force for good within our communities, protect the game, and preserve our relationship with fans throughout the country. The NFL is at its best when we ourselves are unified. In that spirit, let’s resolve that next week we will meet this challenge in a unified and positive way. 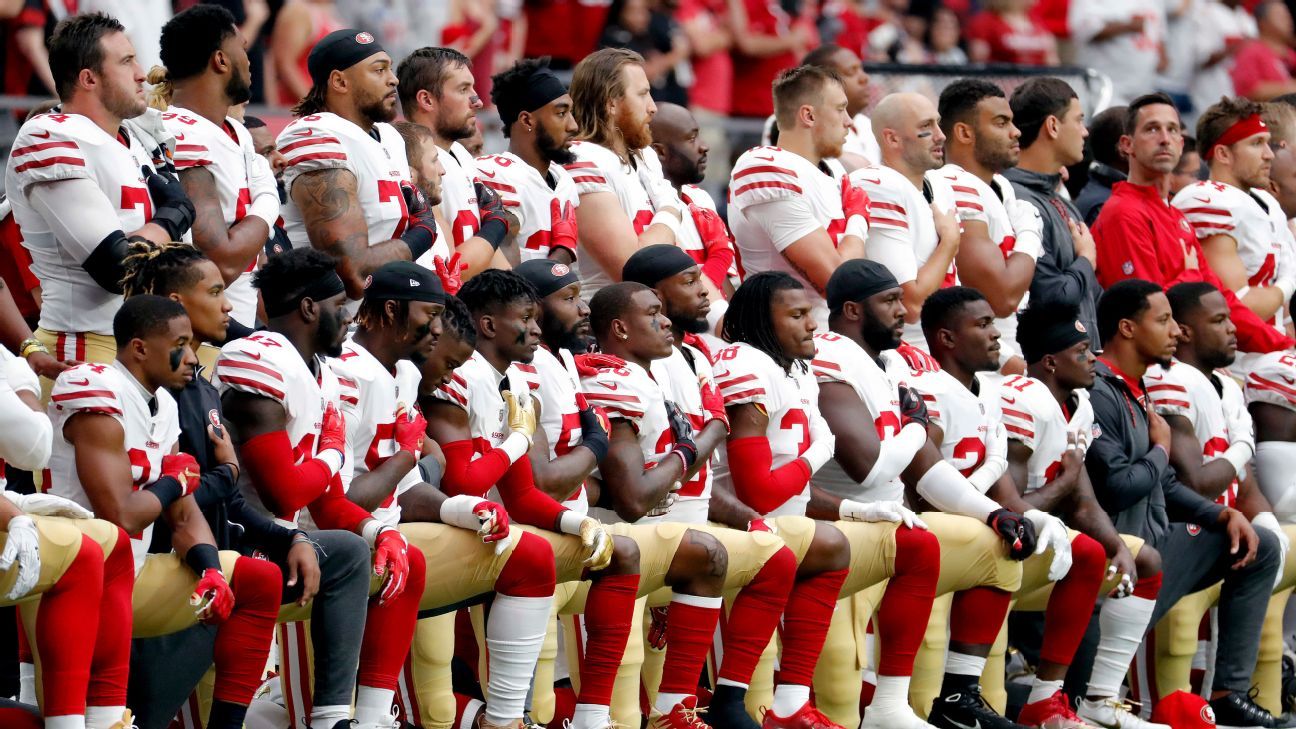 Goodell made it clear in the letter, obtained by ESPN’s Adam Schefter, that he wants players to stand during the anthem. He did not provide specifics on how he intends to ensure it, but he wrote that it would “include such elements as an in-season platform to promote the work of our players on these core issues.”

“Sports, and especially the NFL, brings people together and lets them set aside those divisions, at least for a few hours,” Mr. Goodell said in the letter posted by ESPN’s Adam Schefter. “The current dispute over the national anthem is threatening to erode the unifying power of our game, and is now dividing us, and our players, from many fans across the country.”

Roger Goodell to NFL Teams: ‘Everyone Should Stand for the National Anthem’

Pence made it clear he expected exactly that on Sunday, leaving the stadium when San Francisco 49ers players kneeled during the anthem. In a series of tweets later that day, he explained in detail why he would not dignify an event where people disrespected the United States. President Donald Trump also chimed in on Twitter, voicing his support.

Last year, former San Francisco quarterback Colin Kaepernick sat down and later took a knee during the playing of the national anthem as protest against racial injustice. More players have joined the protests and President Donald Trump spoke out against the activity in September and has continued to do so.

The @NFL owners & Roger Goodell are cowards who just surrendered to @realDonaldTrump. He unmanned you, you greedy, pathetic weasels.

NEW: NFL Commissioner Roger Goodell to team leaders: "We believe that everyone should stand for the National Anthem" https://t.co/KEPUJR8Avx pic.twitter.com/cEGFqycB5B

Roger Goodell releases a statement that says everyone should stand for the national anthem.

Too bad it was a year too late.

Roger Goodell wants to "move past this" the way NFL moves past Domestic Violence, rape, and CTE.

We need to move past Roger Goodell. #Kneel https://t.co/xUHUfXis5c

It’s a good move for the NFL whose ratings have been dipping significantly since the whole mess started. It would be a tremendous win for the President who will be able to claim victory over unpatriotic players. It would be a win for America, not because their kneeling had any substance but because we’ll finally be able to move on and focus on real issues.