What a slimeball! Dem. Sen. Chris Murphy exploited Las Vegas to raise funds, but he's done this for years

by David Patterson
in News

When there’s a mass shooting and the nation is grieving, what does gun grabber Sen. Chris Murphy do? He sends an email to his supporters and constituents asking them to give to his re-election campaign.
Not only did he do this repulsive thing without asking “too soon?”, he also hid the campaign plea behind “gun violence prevention” (aka gun grabbing) organizations.

In an email with the subject line “Outraged at Congressional inaction on guns?” Murphy urged supporters to “Split a donation – of any amount – between the leading organizations working every day to take on the gun lobby and make our communities safer from gun violence.”

One of the organizations in the “split” page users saw when they clicked was Murphy’s re-election campaign. How conveniently subtle. Connecticut is a pretty liberal state, so it’s not like Murphy is too worried, but then again, Connecticut revolted when the state tried to make every gun owner register with the state. Murphy’s Republican opponent wasn’t too pleased.

“Using victims to raise money, and then shaming and guilting innocent, law-abiding citizens that own firearms? I think you pray for the families and you let them heal first,” said Matthew Corey, a Manchester Republican who has filed paperwork to run against Murphy in 2018. 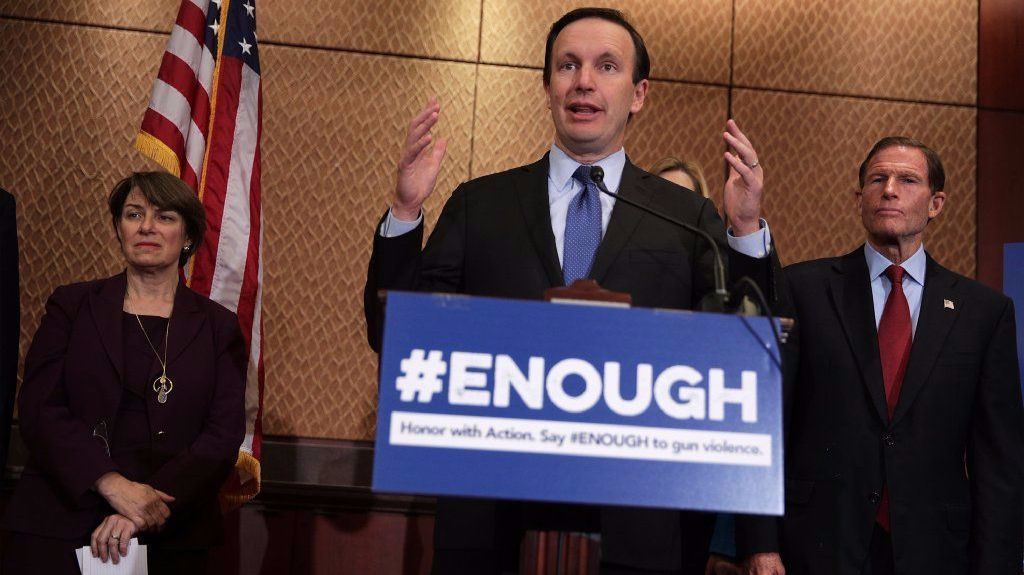 U.S. Sen. Chris Murphy is facing criticism for a fundraising solicitation he sent by email this week – days after the deadliest mass shooting in modern U.S. history – that directed donations to three gun violence prevention organizations but also to his own re-election campaign. In an email with the subject line “Outraged at Congressional inaction on guns?” Murphy urged supporters to “Split a donation – of any amount – between the leading organizations working every day to take on the gun lobby and make our communities safer from gun violence.” When users clicked the link, they were taken to a page to make a contribution. By Wednesday morning, half a day after the email had been sent, the form no longer directed donations toward Murphy’s campaign.

Congressman Is Fundraising Off Of Vegas | The Daily Caller

The email directed recipients to a popular Democratic fundraising portal known as Act Blue, which offered users the opportunity to donate to three progressive gun control advocacy groups and listed Murphy’s reelection war chest as the fourth option. The solicitation, headlined “Outraged at Congressional inaction on guns?,” comes four days after Stephen Paddock opened fire on a crowd of 22,000 concertgoers from the 32nd floor of a Las Vegas hotel, killing 59 and injuring more than 500. Murphy, a staunch gun control advocate, has been outspoken in his criticism of congressional inaction in the wake of mass shootings.

A day later, Murphy’s office altered the link so it would not default to donations for his re-election bid. It is not clear how much money Murphy raised off this solicitation. A spokesperson for Murphy defended the Connecticut Democrat’s right to raise campaign funds in the aftermath of the Las Vegas tragedy.

We should all support Sen. Chris Murphy fundraising off of a tragedy or Clinton using it to drive a partisan and illogical narrative…

Senator Chris Murphy now fundraising off the back of the LasVegas tragedy!What a disgrace!Embarrassed he reps my state!

Murphy has been using gun tragedies to raise money for years. I suppose he’s happy they haven’t been banned, because it keeps him in office and funds his campaigns.

Got something from Chris Murphy in the mail. Safe bet he's fundraising off guns

Chris Murphy is a self-serving opportunist. He sent out a fundraising letter less than one week following Sandy Hook.

One thing Murphy knows how to do is raise money for his own re-election.

I'm a frequent Chris Murphy supporter. I like what he says. I like the way he says it. And his online fundraising techniques are matchless. https://t.co/SgABTMmW2x

What a slimy political piece of excrement Murphy is to do this over and over again. It’s really his stock in trade, raising money for gun control after every tragedy, then doing little about it in the Senate. It works to keep him in office and keep his coffers full.
He was caught red-handed this time, but it’s unlikely to stop him. The best way to stop him, actually, is not to re-elect him. Hopefully, the good citizens of Connecticut will wake up and do just that.